I was thinking that for singe-escaped techniques it is really hard (if not impossible?) to have string hopping. Am I right, or just not imaginative enough?

String hopping is double-escape by definition.

Not exactly sure what you mean by this but @induction is correct, a stringhop is a motion that escapes at both ends — inefficiently.

What we do see on a regular basis in Technique Critique are clips where the player is attempting to do / learn a single escape motion and can’t tell that they’re stringhopping. In other words, you’re trying to do a simple single-escape motion, but you’re actually going up in the air at both ends of the pickstroke and you don’t know it. This is why we advise going fast as a test. If you can do it fast, with a feeling of smoothness, then you’re not stringhopping.

Not sure if that answers your question!

String hopping is double-escape by definition.

I have never seen the definition anywhere, but I was basically hinting that this is the definition. Where did you see this defined?

This is our most complete treatment of the subject:

a stringhop is a motion that escapes at both ends — inefficiently.

So, in summary, if somebody discovers single-escape they’re likely going to be fast, but those that discover double-escaped techniques will likely have a bad outcome (and be slow). That’s interesting, and I think it explains why there are so many fast singe-escaped players and so few fast double-escaped players.

So, in summary, if somebody discovers single-escape they’re likely going to be fast, but those that discover double-escaped techniques will likely have a bad outcome (and be slow). That’s interesting, and I think it explains why there are so many fast singe-escaped players and so few fast double-escaped players.

I have the same feeling. Furthermore, even with all the CTC knowledge I find myself string-hopping when I attempt some difficult double-escaped patterns. In contrast, as soon as I watched the “old” pickslanting videos I was able to rip through a few single-escape patterns (of course I already had some unconscious pickslanting/escaping mechanics going on).

Furthermore, even with all the CTC knowledge I find myself string-hopping when I attempt some difficult double-escaped patterns.

Same for me.
That’s because it’s not about knowledge. A while ago I started practicing USX-Motions and there was absolutely no way I could prevent escaping on the Downstroke on the high e-string (as long as youre not going extremely slow). It’s all on a subconscious level. Still now it seems to depend on what lick I play or what the left hand does. There are things were I pick smooth straight lines at 190 bpm, but I struggle with straight strokes when playing the repeating pattern from the highway start solo, because I played that for years and it seems to be engraved in my backbone “as a whole”. So I have to relearn it, concentrating on the movement of my right hand.

It’s not immediately obvious to me that people who attempt double-escape motions end up most often with stringhopping.

If you look at mandolin, for example, the percentage of double escape players appears much higher. Every really good mandolin player I can name in both bluegrass and classical has an efficient double-escape technique among their tools. We already know this is not true among rock and jazz players. Why the difference?

I would suggest two things. One, mandolin is very commonly a wrist instrument, which is the joint that most good double escape players use. And two, the repertoire. Mandolin literature is not mechanical patterns and sequences. It’s melodies with non-repeating fretboard shapes. This removes a lot of the advantage of single-escape motion.

If you’re learning a new instrument by feel, it’s just not as obvious to feel your way into a single-escape technique unless you’re playing something specifically made for it like the Yngwie patterns or the Pop Tarts lick. That’s how it happened for me. When I was playing more complicated / random shapes, I had nothing. It was only when I started doing the even-numbered shapes that I made the breakthrough.

If a teenager, or someone even younger, is being told to play bluegrass-style melodic literature, and they’re sitting across from a teacher who is making a deviation-like swinging motion with their wrist, I would say that increases the odds quite a bit the student is going to figure it out. If the teacher is good the odds go up further.

You’ll find a similar thing in bluegrass guitar. If you just scan the first-round competitors at the Winfield competition that we filmed, the difference between a sampling of bluegrass players and rock players becomes clearer: 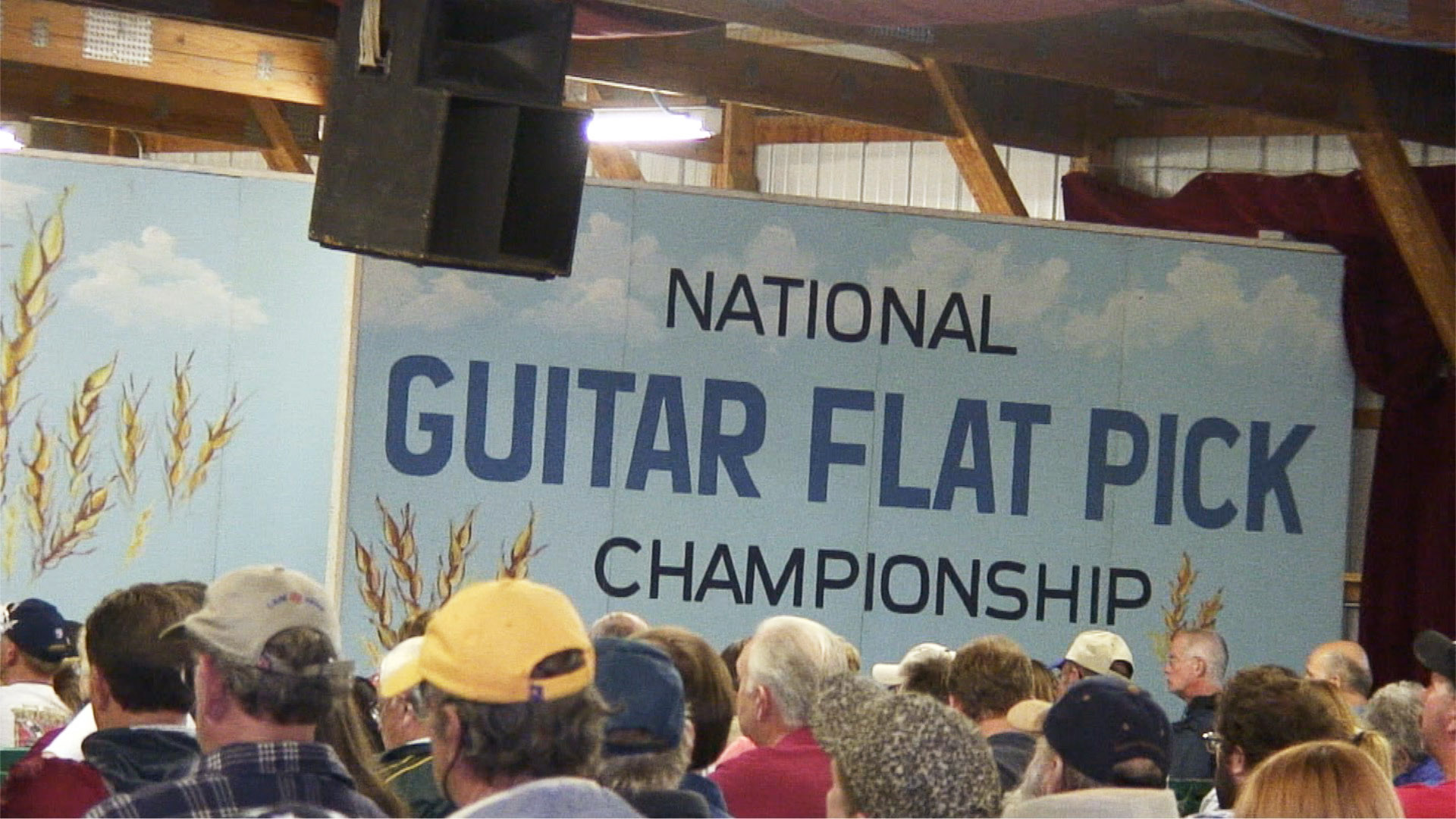 What’s cool about this is that, even though this is a big-name bluegrass competition, not everyone here is an ace or even that great. They took 40 first-round competitors the year I went. This included a mix of people, some of whom seem like total beginners, and a few didn’t even bother to play anything bluegrassy at all and just got up there and strummed for a few minutes.

As you scan the list of players, you can see how different their techniques look from what you might see at a shred guitar contest in the '80s. They’re all making these much larger swinging motions, either wrist or elbow, sometimes both. The guy at 11:45, Kelly Lancaster, is a great exmple of this. You’re just not going to see many rock players looking like that.

Rock players were told: tiny pick, tiny motions, fastest possible motion, single string tremolo, picking volume doesn’t matter because you have an amp, that sort of thing. That’s just not the recipe for stumbling across a double-escape motion.

When you add this up, I think the environmental / cultural factors are a pretty good explanation for why we see the adoption rates of different techniques in the wild.

I have the same feeling. Furthermore, even with all the CTC knowledge I find myself string-hopping when I attempt some difficult double-escaped patterns.

That’s because it’s not about knowledge.

We’re all all old dudes who learned the “tiny pick, tiny motions” shred way. I had no substantive instruction in picking technique outside of trying to play patterns quickly. And that instruction definitely didn’t include anything like what I imagine a mandolin player gets, even if that’s just the visual of sitting next to someone who’s doing it right. The odds that I’d accidently pick up a double-escape motion at that age were going to be low.

Even still, I think we’re finding that some really clear, basic instructions on form can suddenly switch on motions for someone. I know @tommo is a Petrucci fan. Have you ever tried the JP6 guitar? Because in this most recent thread, the extreme forearm contour on that guitar highlighted a part of our wrist motion instructions that was simply absent:

Hey guys, I’m new to the forum and the pickslanting primer. I just startet working on my technique and uploaded a short clip of my two-week-journey. I am trying to use the Upstroke-Escape-technique with the 6-note-per-string pattern. While I think I already made progress in speed and accuracy my right hand looks odd compared to Troy’s setup. Sometimes I feel like I cannot mute the lower strings, but then again it feels comfortable while moving up and down. I would appreciate it a lot if you …

This was really helpful. The breakthrough here was keeping the arm and wrist straight, like an arm in a cast, and totally avoiding the contour. That plus rest strokes is how we got over the hump. I suspect that we’ll discover similarly simple instructions for all the motions eventually.

There will always be a way to do something wrong, and the player always has to take it the final mile and actually do it. But I think you can get to the point where you’ve eliminated so many variables that the number of ways to do it wrong plummets from where it is currently.

A post was merged into an existing topic: Hopping all over, no? I can’t seem to find a functional right hand technique