My partner created that slowed-down file back in at least 2016 and he is not interested in pursuing this subject anymore so unfortunately I can’t get that exact information at the moment.

For my study, I simply used the built-in audio slow down feature on YouTube’s player. It works remarkably well to my ears…and ANYONE can access it immediately!

based on listening to the recording and the Steven Rosen interview here starting at the 12:09 mark

I disagree . He used the same ‘shape’ on Somebody he me a doctor … with and open E

At about 12:34 of the interview Eddie goes “You can do that one in about three different keys!”, and proceeds to play the following: 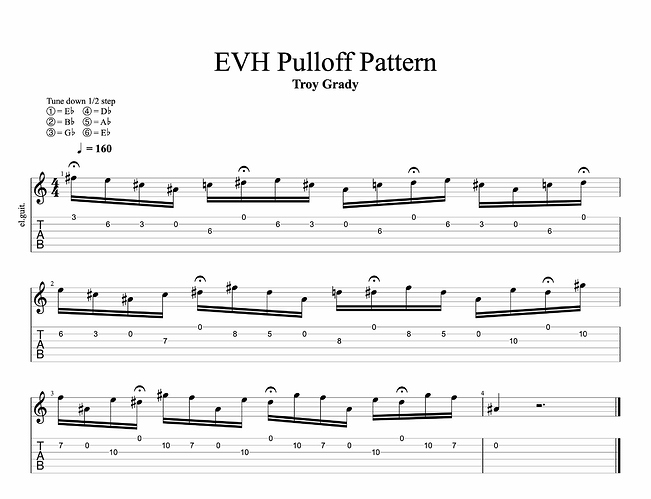 The “E” is constant in the three iterations of the pattern, the last one of which of course is the “Somebody Get Me A Doctor” version. Even if we assume Eddie has some fascination with E that he wants it the same in these three different keys, there is pretty much no way you’re going to play this and have it sound like it does in the interview without the open string. I think this is about as conclusive as you’re gonna get on this one that this is indeed a clever open E string pulloff shape thingy.

I can also offer some picking insights for the A blues stuff:

As per the slow motion, when he’s going between two strings it is very often outside picking. That’s his thing. So in measure 13, the 19th fret of the G is a downstroke and the next note on the B string is an upstroke. That happens in two places.

And it’s also clear he’s doing it with double escape wrist motion. I think that’s really the takeaway here, i.e. how his picking technique works. Not necessarily which notes were played with which pickstroke, per se, because that could “mean” anything. But understanding that he gets over the string by making these particular motions, and he does so with a middle finger grip and a supinated arm position. This puts him in a category that also includes Steve Morse and Albert Lee, whose techniques all function similarly.

So there is a relationship between arm position, pick grip, and picking motion. These things aren’t random. And knowing this makes it much easier to learn their techniques as well as any other principally wrist oriented technique you might experiment with.

Troy, thanks so much for the examples…this is exactly why I wanted to post here.

I don’t hear any pick attack on the 8th fret of the B string here, so if we assume he is playing the open E, this is the only way I can see the rest of the lick at this point.

I don’t think it is done the way Wolf Marshall transcribed it in other words…or is it?

Single upstroke on the top string. Here it is:

So you are saying following outside picking he is using an upstroke on the open E. Then what does he do after that? Are you hearing it as Wolf Marshall transcribed it?

There are no other picked notes — it’s all legato baby! Just do the upstroke and let those hammers and pulls fly.

So would it then be as follows?

Or…is Eddie doing a “silent hammer-on from nowhere” at the 8th fret of the B string after the Upstroke of the open E and then pulling off for the rest of the sequence on the B string?

Sorry for the confusion! There is only one pickstroke in this awesome lick — the upstroke on the open E. That’s it! Everything else is unassisted. Slow down the USFest video, it’s all right there.

Yes! But check my math, watch the video. He goes nowhere near the G string. Always work from video if you can find it. Eliminates tons of time guessing.

He’s definitely sounding the 8th fret of the G string in the actual “Eruption” sequence…would that be a silent hammer as well?!

It’s not silent, it’s pretty loud! I have no doubt it’s the same approach, Eddie is very consistent. “Hammers from nowhere” is always how I’ve played his pentatonic stuff because I just assumed it was obvious that was how he was doing it, i.e. one picked note on the top and let it fly. I never actually looked for video of it until just now though. But let’s say I’m not surprised.

Ben Eller actually did a lesson on this general subject last year:

I know Eddie did the “silent-hammer from nowhere” thing constantly. In fact, you’ll see I have him doing it later in that sequence and others in “Eruption”. The ending cadenza of “Ice Cream Man” is all about these “silent” hammers… 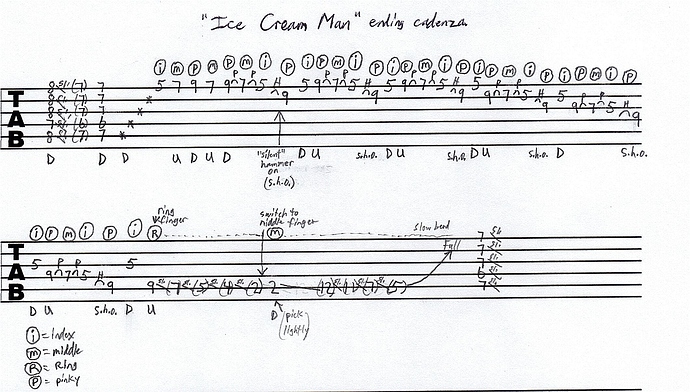 I did always play the B position version of this lick using the open E in “Doctor” and “I’m The One”, but I never clocked this “hammer from nowhere” pattern for the rest of the sequences…super light bulb moment!

This is all a great help Troy (and Ben explains the concept well)…I’ll go back and try out some of these concepts and apply them to my transcription and post what I find here and see if I’m closer! Thanks a bajillion!

P.S. Note…no one has ever transcribed the lick this way before to my knowledge. This is the whole purpose of my project…to get it right for a change!

Have you seen this video from '78? Hopefully the time stamp is for the lick.

The quality isn’t the best, but someone with a bit more experience analysing pickstrokes might be able to work out what’s going on. To me it looks like he hits the high E, hammer ons from nowhere onto the b strings then maybe his picking hand moves to hit the 8th fret on the G string?

Yes, I have seen these clips…I think Troy is right about the only picked note being the open E. You can see it very clearly in the “Somebody Get Me A Doctor” clip that he posted above.

One thing that makes Eddie really nail these “hammer-ons from nowhere” notes in “Eruption”, “Somebody Get Me A Doctor”, etc. is that he uses his ring finger…pretty much the strongest finger on the left/fretting hand. He uses his pinky in the “Ice Cream Man” cadenza, but definitely the ring finger for this “hammer-on from nowhere” in “Eruption”, “Doctor” and “I’m The One”.

I love this footage — I saw it recently too. Not sure why it’s appearing now at this quality level, since I’ve seen much worse versions of it in the past.

Anyway, the lick you’re pointing out here is awesome but it’s actually a different lick. This one uses a barre on the box position, and you’ll hear it everywhere in Eddie’s pentatonic playing. We sort of “transcribed” it in our Cracking the Code episodes way back:

Then I put in the soundtrack toward the end in the classroom scene:

I’d have to look for video of how Eddie picks it, the frame rate in this clip is too low. But it’s probably at least a little more more “picked” than the Eruption lick, just given the fretting.

I think that is the Clapton “Sitting On Top Of The World” lick or a slight variation thereof played in “You Really Got Me”, “Hot For Teacher” and “Panama”? Eddie would often play this during “Eruption” in place of the lick from the first album recording we are discussing…

It’s also in “Outta Love Again” and “When It’s Love”…all of which demonstrate in this clip:

That’s the lick! Great playing. And Ed-like grip and arm position. Is that how you’ve always played?

Only thing to add is that I don’t think the B string index finger note is hit twice. It’s just the three notes on the B string. This live clip has some pretty good hand closeups despite being uploaded in potatovision resolution, so I’m pretty sure it’s just the G string note and then the three B string notes:

Thanks! And yep, I just kind’ve naturally fall like that…never studied Ed’s arm positioning (or anyone’s). I don’t see Ed hitting that B string note twice in the clip you posted either, but I do think I hear it in the album version. I think he often hits that note in that point in the lick twice since he’s taking it from Clapton who almost always hit it twice. I think he hits it once sometimes and sometimes twice, but if I were to guess the intended pattern I would make an educated guess that he’d want to do it like Clapton. I more often hear the two picked notes than not in other words…as the TAB examples I have show how I hear those specific licks.