My long-standing problems with tremolo picking

I was going for an EJ type of USX wrist motion, but It could be that I slipped into Andy’s style of DSX picking motion between the takes as I often play like that too. From the camera angle, it is indeed a bit hard to tell though; I can’t say for sure myself looking back at the video!

Sorry for the delay everyone! I was busy earlier this week and then ran into a headache trying to edit the videos so I just put everything into one video.

This video is a demonstration of my DSX technique that everyone has requested. I have front angle and side angle shots of tremolo playing at 180bpm, and also a shot of me playing a pentatonic run to show you how I use this technique for more musical stuff. It’s a two note per string run, and it’s probably not pure DSX at some parts because I think I use a tiny bit of rotation to escape on the upstroke. I played it 3 different ways which are all equally comfortable to me. 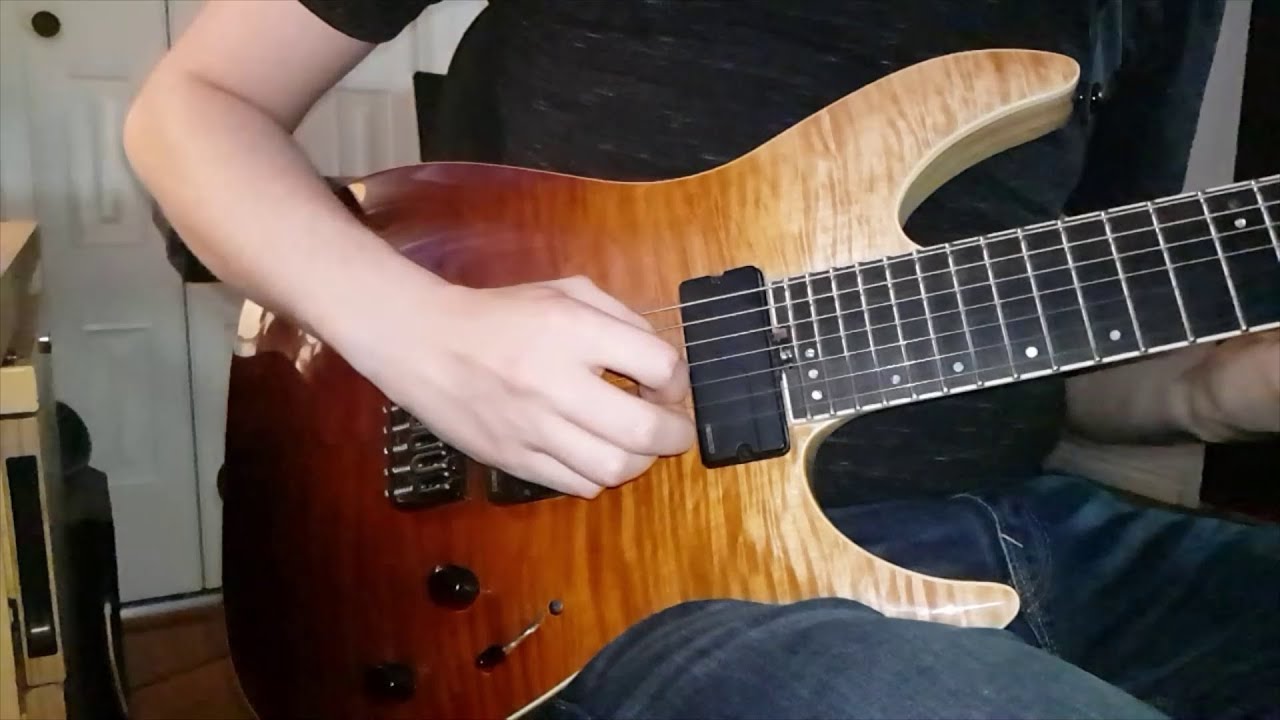 The slow stuff is comfortable, but the two tremolo picking recordings are not smooth and not effortless to me at all. My hand is still bouncing erratically, I’m just suppressing it by digging my thumb into the lower register strings.

More generally, the vibration thing looks pretty fast. It also looks like wrist/flexion extension, which can certainly work as a picking motion.

From testing just now, I can vibrate my arm up and down around 250bpm in eighth note taps.

While that sounds super useful and cool, I’ve never found a way to exploit this motion on guitar, it just hinders me. Also, while my flexion/extension is indeed fast, that speed does not translate to other motions at all. That’s partly why I find the table-top tapping test a very weird test, because it only tests one of your motions. I think swishing your hand back and forth on a table might be a better test for determining wrist deviation speed. I’m not really able to do that motion without dragging my arm along with it though.

Also, while my flexion/extension is indeed fast, that speed does not translate to other motions at all.

For a pure wrist approach, you need a three-finger / middle finger grip to use FE motion. That’s how EVH does it. With a more typical index finger grip, this motion that I do is mostly flexion-extension: 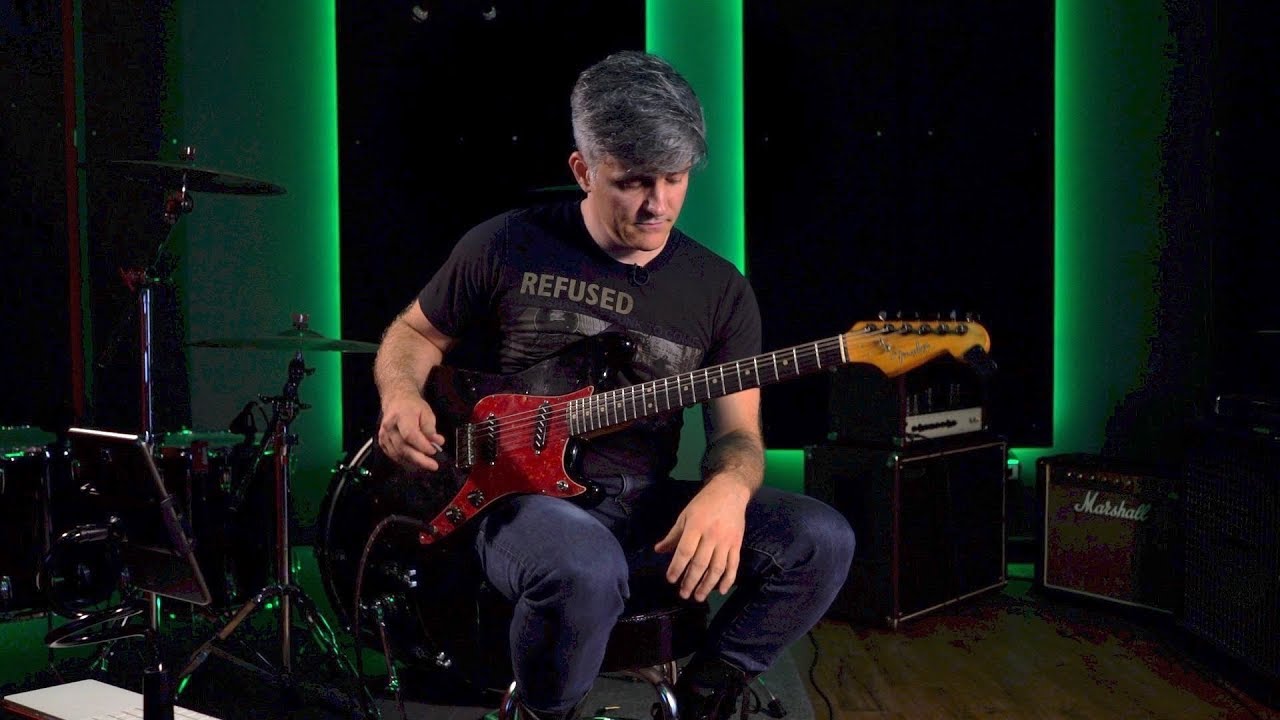 More generallly, we’re still waiting on better video from you. If you think there are potentially physiological underpinnings to this, like a kind of tremor, I would also suggest potentially getting looked at by a doctor, either neuro or ortho or something. If there’s a legitimate issue, let’s find out instead of beating your head against a wall.

When you do the table tap test, do you experience uncontrolled tremor as in your picking video, or does it look like controlled tapping, just very fast? Some video of this would be instructive.

I’d say it looks controlled if I’m trying to use that motion in isolation. And it doesn’t happen in other activities since I can’t think of any other activities where I’d need to deviate my wrist quickly.

Nonetheless, I’m not super interested in trying to use the EVH method since I’m currently searching for a method that is compatible with palm muting. I have experimented with his technique in the past though.

More generallly, we’re still waiting on better video from you

I actually posted a video directly above my last reply. Sorry about the confusion, I guess I could’ve just replied to you in the same post!

If you think there are potentially physiological underpinnings to this, like a kind of tremor, I would also suggest potentially getting looked at by a doctor

I have looked up tremors, but I doubt it would be that since it’s not persistent. It just happens when I try to move my hand fast because I don’t understand how to do wrist deviation in a natural way. I would never have even discovered it if it weren’t for practicing guitar. I didn’t even realize it was weird until a few years ago; I just thought everyone could vibrate their hand up and down.

Sorry, my bad! I didn’t see that — I only saw what you wrote to me. This new clip looks fine to me. I’m not seeing any of the spasmodic type motion. Were you specifically trying to avoid that?

The motions here are very small, which can sometimes make moving from one string to another at high speed feel like a comparatively larger and more abrupt jump. But if you don’t notice that then I wouldn’t worry about it for now.

Otherwise, if you can do this with no sudden uncontrolled vibration-like freak out, then again this looks pretty good. This makes me think you can probably do plenty of other picking motions as well if you want to, if only for the learning experience.

Re: muting, note that when you use the three-finger / middle-finger grip like EVH does, you need to use a more supinated arm position. This is actually better for muting, not worse, because it allows the pinky side of the hand to stay in more continuous contact with the strings. When you use a maxi-supinated arm position like Steve Morse, the entire right side of Steve’s hand rests on the bridge for muting across all six strings if he wants.

So again, using more supination with a middle- or three-finger grip is worth the experiment if only because you may uncover motions that feel or work better right now. Our instructions for cycling through these different arm positions are all here: 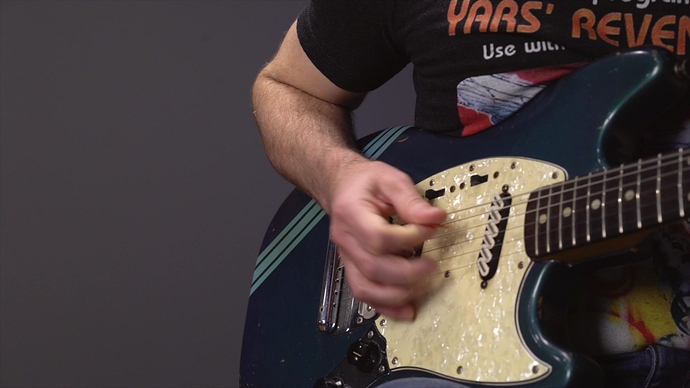 If you don’t have a membership, or can’t swing one currently, we still have the scholarship program so feel free to reach out about that if you like. Up to you.

Also, note that “deviation” isn’t really what players use when they use your arm position and perform a DSX wrist motion. For example this is what Andy Wood’s DSX motion looks like:

This is not deviation, but actually a motion somewhere in between the deviation axis and the flexion-extension axis. In other words, if Andy were to standardize his arm position so that his thumb and pinky were parallel to the floor, his wrist would be moving on a diagonal, up and to the right. This is the same motion Al Di Meola, John McLaughlin, and Andy James use. I’m not even really sure there’s anything particularly special about “deviation” as an axis of wrist motion, so much as just a compass point chosen by academics. In many everyday ctivities, these “in between” motions are the ones people use.

So regarding my DSX motion:

The motions here are very small, which can sometimes make moving from one string to another at high speed feel like a comparatively larger and more abrupt jump. But if you don’t notice that then I wouldn’t worry about it for now.

If I try to move my hand any further it starts to drag my forearm along with it, which is why I use small motions. I’m not sure if I can comfortably skip to other strings or not, that’s something that would take some practice as it’s not a motion I’ve learned how to do yet. I’ve mostly just focused on single string stuff for now.

Also, note that “deviation” isn’t really what players use when they use your arm position and perform a DSX wrist motion.

The main difference for me is that I’m digging my thumb into the strings to dampen the vibration, so Andy Wood’s DSX technique wouldn’t work for me, although I wish I could do that. It looks like such a complex hand motion!

I think I misunderstood the EVH motion, as I thought you were referring to his fancy tremolo picking where his hand is in the air. I think you made a video about that motion. Either way, I know what you’re referring to now, and I’ve also spent some time experimenting with more supination, but I don’t find it comfortable at all. For one, my thumb doesn’t bend far enough to even reach the strings if I supinate like Steve Morse does. But even with less supination, it only works for me if my arm approach is very high (like if the guitar is hung low or my shoulder is raised) which personally isn’t comfortable. And even if it were, my vibration motion isn’t exploitable here anyway.

I’ve also experimented with the three finger grip in the past, although I was emulating James Hetfield and not EVH at the time. I don’t mind it, but it doesn’t make much of a difference to me.

This makes me think you can probably do plenty of other picking motions as well if you want to, if only for the learning experience.

That’s good to hear, although it leads to the main question: How?

I kind of regret mentioning my DSX technique, since this entire thread immediately derailed from the first reply, but I’m still hoping I can get feedback on what I can do going forward. I’m really trying to find a USX motion that’s compatible with palm muting. I know it won’t happen instantly (or in 10 minutes of experimentation), so I’m willing to take the slow route, but I’m just not sure which slow route. My DSX technique took me about 2 years of constant practice before I could get past 130bpm, so that gives me a tiny amount of hope that I can do it again with a different technique.

Andy’s motion isn’t any more complex than any other wrist motion. It’s just the wrist moving back and forth. It may even be the same exact motion you’re doing, I can’t really tell from your clips. Pressing the thumb against the strings wouldn’t inhibit your ability to perform his motion. Andy and Al Di Meola both play with their thumbs pressing on the strings at times and their motion doesn’t change, just the arm position from which the motion is being performed.

Even if we suppose you’re not doing Andy’s motion, and really just doing deviation, well, Mike Stern’s USX motion actually is devation. There would be no change necessary to your wrist motion itself, just a very small change in the arm position necessary.

So it’s gotta be either one, you’re either doing Andy’s motion or you’re already doing Mike’s motion.

That’s good to hear, although it leads to the main question: How?

There’s only so much we can in a forum post, though we try. We have very detailed tutorials in the Primer for doing these motions, and will only be adding more over time. If you want to watch those and try some of these things, like the wrist-forearm stuff you can pick up a copy of the product or reach out about scholarship, which again, can be as substantial as 100% free if you really can’t swing it.

Can’t make you any better offer than that!