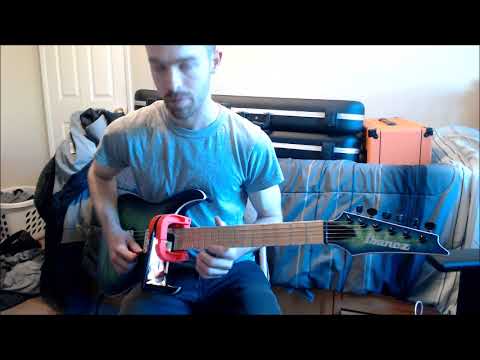 In the video I tried to include some accents with a heavy attack before I played the lick to show some dynamic contrast. At the end of each lick I play a chord with muting and also a heavy attack. I would like to think that when I played the actual licks I was using a moderate attack. I would say that no where in this video are examples of my lightest playing. What do you think of my attack while I was playing the licks? Am I correct in classifying it as a moderate attack? I feel like this is in the ballpark of the general sound I am looking for in my alternate picking.

Clearly when I am doing the accents I am rest stroking. How about when I’m playing the licks? I don’t think I’m rest stroking, but I am having a hard time deciphering whether or not this is true. It’s probably not a big deal but my vision is to eventually get a moderate attack with rest strokes for these single escape lines.

I think I am using 9 to 3 wrist deviation with a pronated forearm. Is this accurate? Am I using a different wrist motion or is there maybe even some elbow that’s being thrown in occasionally?

On a final note these two licks are the same as the licks I played in my very first Technique Critique video almost 3 years ago. If you have time it might be worth comparing the two videos to see how my playing has changed since then.

Hello Troy, Brendan, Adam, and fellow Cracking the Code viewers, First and foremost, here is the video of my alternate picking technique: In the video I play the Yngwie six-note pattern, and also descending sixes both using upward pickslanting. The tempo is 110 bpm, six notes to the click. I shot from three camera angles, both on my PGM miKro, which is a small-scale guitar I absolutely love playing, and my trusty, full-scale, Ibanez GIO. I put the Maxon OD808 in front of my amp just for fun. …

Lastly, @Troy it would be really awesome if you could take a look at my playing.

I don’t think I’m rest stroking, but I am having a hard time deciphering whether or not this is true. It’s probably not a big deal but my vision is to eventually get a moderate attack with rest strokes for these single escape lines.

Not to be a troublemaker, but is it actually important to you whether you are doing rest strokes or not? I think this is more of a pedagogical tool for people who are having difficulty ensuring a consistent escape, to help them force strokes to “trap” in the direction of the rest stroke. If you are consistently getting the escape you want (which seems to be the case for you), it seems to me the question of rest strokes is of only “academic” interest.

Overall I think this sounds good, and I agree it’s not a super light or super heavy attack (apart from the intentionally heavy strokes you do on the long notes). The descending line especially sounds really good to me.

On single-string lick at the beginning, it sounds like there might be a note or two where either your hand sync is a bit off, or maybe you choke out the note with the thumb of your picking hand.

On the descending run, it seems like on the low (pitch) strings, the angle of the pick allows for nice even upstrokes and downstrokes (orientation of the pick in space is pretty much “neutral” with respect to the path of the picking motion). The upstrokes and downstrokes sound fine on the high pitch strings too, but visually, it seems that when you are working the higher pitch strings, the orientation of the pick in space is biased for easier downstrokes, harder upstrokes. So if you feel any trouble with upstrokes on the high strings, that could be a factor. But if they feel fine, don’t worry about it.

For the single string lick, your arm position looks only slightly pronated, or maybe neutral, and you seem to have more elbow involvement than on the descending lick. I’m not sure the downstrokes are even on a trajectory that would escape.

On the descending lick it definitely looks to me like wrist-oriented DSX with a pronated arm position. Not 100% sure if it’s strictly 9-3 rather than say, 9-2 or 8-2, but as long as it feels fast and smooth, I think that’s more of an academic question.

I will say that on your slow, intentionally heavy downstrokes, you look more neutral or supinated and make the downstroke be extending the wrist. But yet again, this is mosly just descriptive/academic. The hard thing is getting fast alternate picking to work, and there’s no rule that says when you find something that makes fast alternate picking work, you have to use it for every lick or every note you ever play.

Thank you for your critique. Much appreciated. That was really helpful. You made a lot of great points and you mentioned some stuff I wasn’t even aware of in my playing.

Any more critiques from others would be great as well. I really want to get a solid handle on my pick attack and motions.

I think you should immediately pick musical goals and see if your picking can accomplish them because this video shows that your picking motion is good but it’s kind of disconnected from actual music making. For example, why not construct some lines where the accents are placed musically and happen on upbeats and downbeats? The more the video is like an actual musical performance the more useful it is to deconstruct because you’re actually getting at the heart of the thing rather than what you think the thing might be

Let the music decide what is a moderate dynamic range. The way you’re picking is perfect for the setting it’s in, but it would be overbearing in some situations, and way too quiet in others. You’re playing is definitely at a solid middle dynamic level, but that is actually the most boring place to hang out. The limits of the dynamic range is how you really grab people’s attention

Also, you should really really focus on the metronome and locking in with it. I’m not sure if you’re familiar with subdividing, but at the beginning when you’re playing with more space I can tell you are at least not doing it in that particular moment. Subdividing is feeling the beat being divided even when you’re not playing. So for example, if you are playing a funk song but you only play a few notes in the whole measure, you should still be feeling constant 16th notes in your belly or in your head or wherever you want to feel it. If you are playing in a metal band and the only in rhythm is a stab on the first beat, you should still feel the e&ah2e&ah3e&ah4e&ah after the initial stab on 1. You know what I mean?

There’s this back and forth that I’ve gotten going that is helping me learn this CtC stuff really quickly. I’m treating my music like it is a reflection of my mechanic some days, and then flipping the script and treating my mechanics like they are a reflection of my musical goals other days. The thing that’s really surprising is that I am honestly making more gains on the thing I am NOT focusing on. I focused only on playing Fracture by King Crimson for a day and didn’t think about my picking hand really at all. By the end of the day I had at some point changed my cross picking motion to one that is equally comfortable but with a much wider dynamic range

Alternately, focusing on my picking hand and adding some economy motions to my usually strict alternate picking unlocked a whole set of musical ideas based around quintuplets and septuplets that were suddenly just flowing out of my playing. Although I have since gone back and relearned those lines alternate picking, those musical ideas were unlocked by focusing on a mechanic.

You just got to keep recontextualizing what practicing and playing guitar is so that your body and subconscious mind get the opportunity to come up with interesting solutions. It’s like engineering ways to get out of your own way. I think whatever you don’t like about your picking will seemingly magically disappear if you just focus on executing rhythms super accurately

I hope you find this useful and don’t think that I just talked past your original intention. I wrote out this response because it seems like you’re very on the right track but just need to flip the script a little bit. Just PICK (it’s a pun!) some musical goals and see what happens!

Thank you for watching my video! That was a very helpful and interesting take on my playing. I will definitely have to start flipping the script and work on some musical goals to go along with my mechanical goals. Also, thank you for your tips on accents, dynamics, and rhythms.

Hi Calvin! Thanks for filming. Basically this looks fine to me. I’d just point out that you’re not picking all the notes in the descending line. You’re going DUD - DUP, where P is a pulloff. For whatever reason, you stop picking at that point and just ignore the last note. Then you start over again on a downstroke. You do this on two or three strings which you can see in slow motion. In the older clip you linked to, it sounds like you pick all the notes, so this is not something wrong with your technique per se. It’s just a fluke with this lick on this day and so on. The technique itself seems to work fine.

In fact, comparing the older clip and this one, your technique looks identical. It’s so similar that I don’t think it’s productive to worry too much about it at all at this point. Any concern about rest strokes or attack or whatever, these details are so in the weeds that I personally can’t perceive them. I mean, literally, cannot hear the difference.

That’s good news! When things work, even at all, I’d just focus on playing tunes or whatever it is you like doing. If there’s a line you can’t play for some reaon, then we can take a closer look.