I’ve always been a tube amp player, largely because that was how it was done when I was growing up in the 1970’s. My rig has evolved from my early days - as a 15 year old kid - with a JTM30, to my current hot rodded Marshall Origin 50, Custom 2x12 Cabinet, a huge pedalboard with a Lehle for running a second, ‘clean’ amplifier, in this case, my old 1999 Marshall MG50. 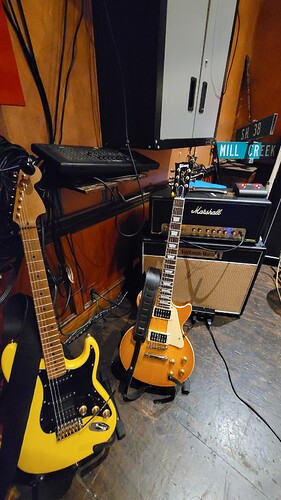 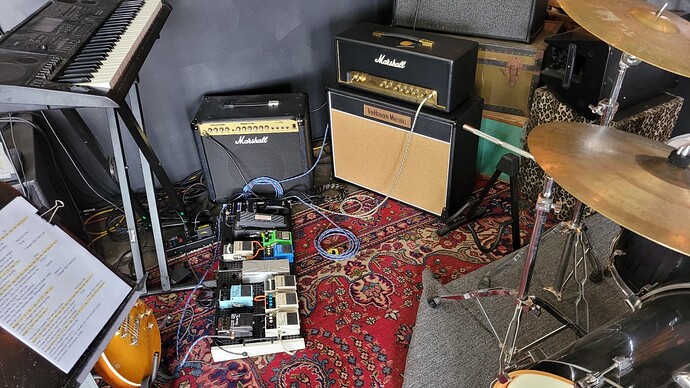 It’s kind of grown to the point where it’s just impractical. That’s always been my benchmark anyways. It sounds great, but it sucks to transport.

A lot of studios where I work seem to be using amp simulation programs much more frequently, with Avid Eleven Mk II and Blue Cat Destructor being the two most prolific.

I’ve never really messed with them very much until a recent project gave me the opportunity to delve into an amp simulator. 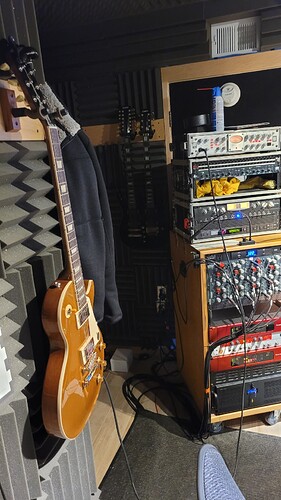 I was hired on to complete a recording for a band whose main guitarist and writer, quite literally walked out in the middle of an album.

The main recording platform in this studio is Cubase Pro. 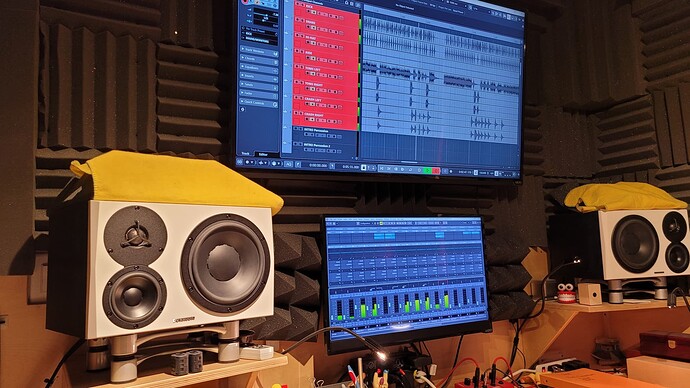 When we first started working on this project, back in 2019, the amps du jour were Marshalls, of course… 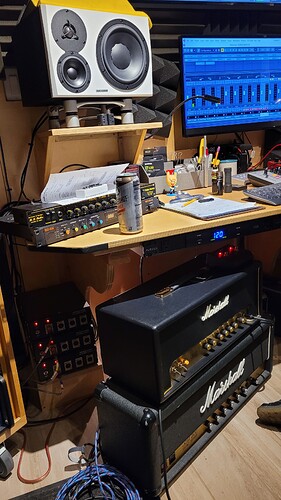 However, as we moved forward with the recording process, I found myself being placed more frequently into the role of producer. I started really studying the Cubase platform and tried to get at least a working knowledge of it. 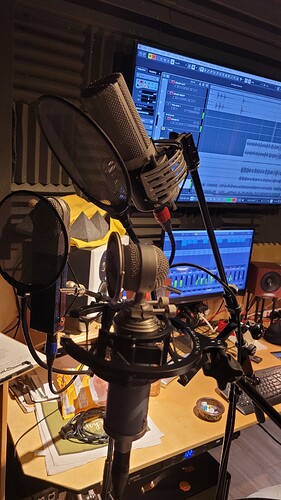 After digging around in Cubase for a while, I discovered an amp simulation called Steinberg VST Amp Rack. This took a while to figure out, but once I got the mechanics of it down, it became easier to use it. 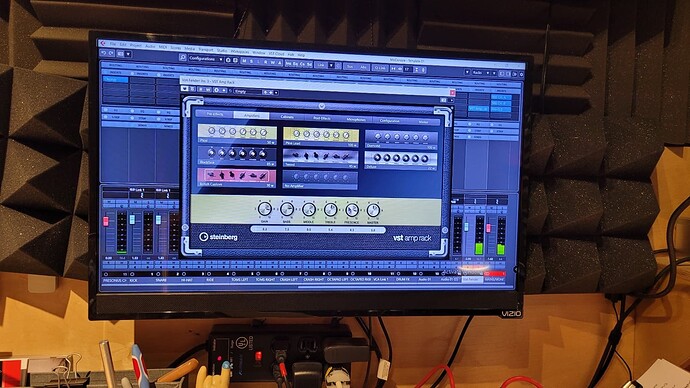 So, while I’m still using a ridiculous large, heavy rig for live work, I’m embracing VST Amp Rack for its speed of setup and virtually limitless array of available effects in a recording environment. 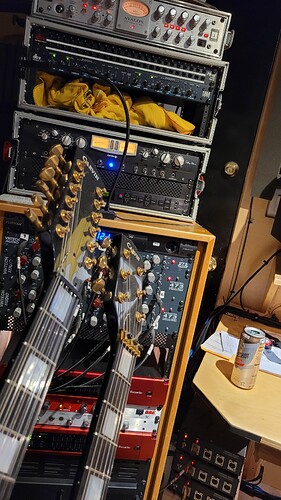 Anybody out there using simulation for recording??? If so, which is your preference and why??? 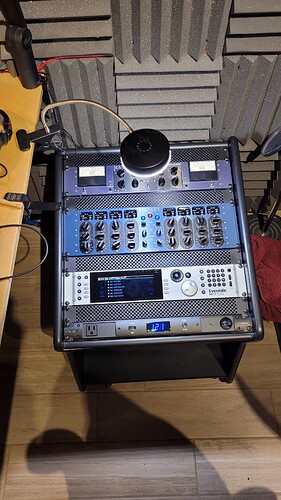 I don’t use simulators to record, but I do use the kemper profiling amp for the same reasons you said.
I can get the sound I need in minutes and have more effects options than I’d ever need. Plus I use the send and return for hardware inserts and I can reamp through it. Massive space and time saver and I can record at home at night without blasting a cab which would get me evicted pretty quickly

Just use what sounds good. Other than that, record a di track with everything for reamping if you need to later, and your good.

Anybody out there using simulation for recording??? If so, which is your preference and why???

I still do all my “for keeps” recording with a live amp, mic’d up, run through decent pres, etc. Familiarity existing investment in a pretty killer signal chain, and the fact I haven’t found anything I like the sound of more yet.

But, increasingly I’ve taken to using VST amp sims while writing and demoing. As a “real amp” guy, it’s kind of a game changer that I can plug directly into the board, track something with a “good enough to use” tone by just recording the DI but listening back through the VST, and then the next day, if I decide that the melody line isnt quite right and that the hook sounds better if I go to the 2nd rather than the 5th on one note, I can somly punch that one note in and it sounds seamless. It’s pretty awesome. Once evertyhing is written I’ll still go back and re-record the part as a single take and printing my amp tone to tape, but even just to be able to reamp the demo track through my real amp to get a quick “more or less what it’ll sound like when done” thing going, it’s pretty awesome

The future is so cool, you know?

I’m using an Axe FX III for recording/gigging, and it satisfies my mediocrity well.

I use it mainly for cleanish/overdriven fender and Marshall like sounds.

Coupled with IR it is super versatile. All I miss is a god Vox type amp in S-gear, but I guess you can’t have it all.

Check this out! Unbelievable - shows what can be done: 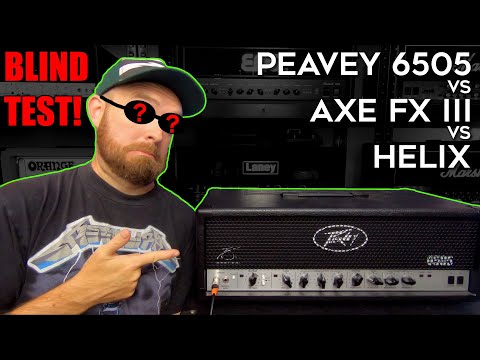 Looks I’m going back to a single 1x12 amplifier for live use and getting rid of the huge, heavy, 1984 Jackson 4x12 and hot rodded Marshall Origin 50H. 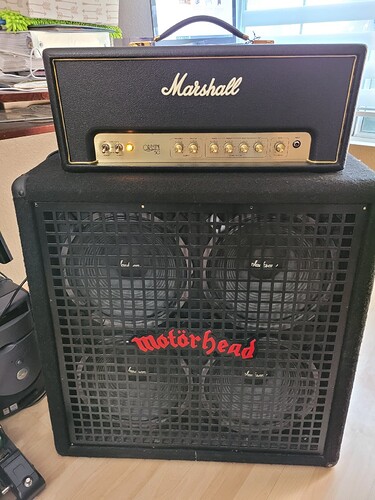 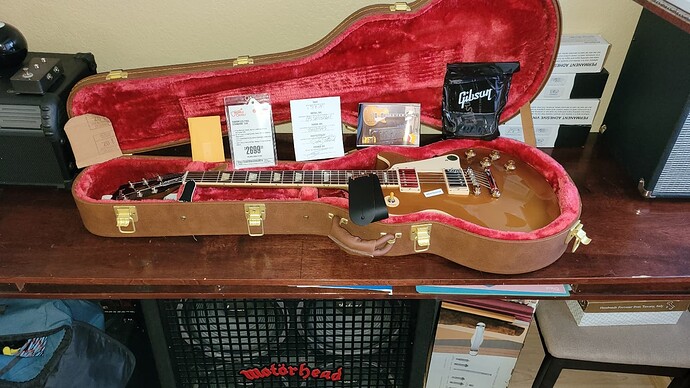 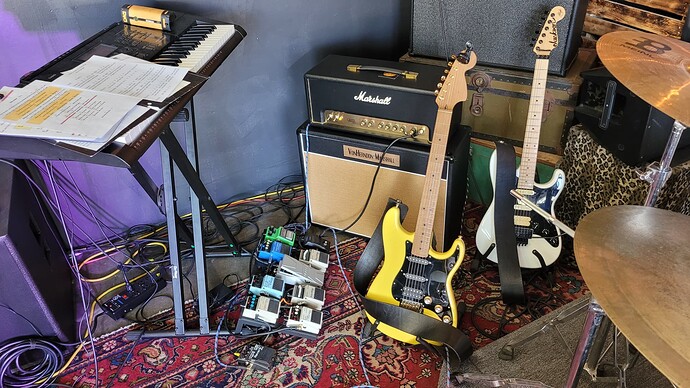 Gonna switch over to a Mesa Fillmore 50 Watt Combo…

They all sound good IMO, for me it was all about feel when I tried any analogue/digital gear.

I this sums it up well for me. I have recently bought a Captor X and still struggle with the feel…

That’s a fair assessment from what I’ve heard a lot of others say. I wonder if there’s any degree of ‘familiarity’ at play? For years I was a tube amp guy playing in a band. When I gave it up and did recordings for fun it was all Misha Mansoor early Periphery era style POD setup. It ‘felt’ weird at first, but I got used to it. After a few months, the majority of the playing I did was not through a tube amp but the POD → DAW tracking. I’ve never been in a situation where I’ve lived in both worlds.

Honestly I think coming from the analog world first (I was around and playing before the first line 6 amps were released in the late 90’s) digital always felt too easy to play. It was like a very idealized version of what it was trying to be. Im not too familiar with a lot of the recent offerings, but from what I’ve heard, it’s not much different only that the cab simulation aspect is now more reliant on IR’s which is a huge step in the right direction. Even the old pod 2.0 that I still have sounds better with the cab sim off and a good IR on it.

I think for someone who has only largely played digital their whole life, a real tube amp would be a bit of a culture shock, as they respond very differently and are often harder to play.

Have been using an Axe FX II for a long time but sold it once I tried an neural dsp plugin.
The best sounding Guitar VST’s in my opinion have all been released by neural dsp.
I narrowed it down to these few:

You should try the Fortin nameless it is in my opinion the best metal AMP VST so far and I tried a lot of different ones.
Also I usually use the standard cubase saturizer on metal guitars to give them a more “closer/bigger” feeling with some decent EQ and Noise Gate and a overdrive pedal with the tone close to max but no gain.

There’s probably some of that… but I think it also has a lot to do with how you listen.

Our gold standard, as a group of guitarists who by and large started playing before amp modeling became widespread (at 40 I’m right at the cusp of that, and my love affair with Mesa was ignited by a Johnson Millenium of all things, that had a killer lead patch that ended up being a Recto with delay that I tried at a guitar shop), is the sound of an amp in a room.

That’s not what a modeler is trying to emulate though. They’re trying to capture the sound of an amp with a mic maybe 1-2" off a speaker, run through a mic pre and then to disc, and played back through a studio monitor.

If I do the exact same exercise with my Mark V, and listen to it monitoring through headphones while playing, with a setup with no detectible latency, it still “feels” weird, because notes don’t seem to bloom the same way they do when I take the headphones off and listen in the room.

You can get used to this, and sometimes I will still record this way, but I’ve also done my share of recording with the mains up and no headphones and just accepting that while bleed will occur, it’ll be extremely minimal in a pair of mics right up against the grill of a 90w tube amp. I should probably try throwing a heavy blanket over the cab or something just to reject high end bleed a little futher…

Years ago when I was doing studio work, I had to do a lot of reamp jobs before mixing. The studio owner had a lot of great amps but he started selling them off when the money wasn’t coming in anymore.
So I started using the kemper instead of the horrible preamps he bought. I bought some great profiles off a local engineer who owns really great gear, and more importantly, could make good profiles for the kemper.

I know it’s not the same as the amp sims you are talking about. Just a little short story on my intro to kemper world!

Neural DSP’s Fortin Nameless is my favourite so far. It sounds great if you replace one of original IRs with ZillaCab (free).
It should actually suit you as it is basically modded Jose Cameron Atomica, which in turn is a hotrodded JCM800.

Also Granophyre is nice, it’s got some unique character of it’s own.

In any other forum, a discussion of “amp sims VS real amps” would have generated insults left and right, but here it’s going pretty well!

Thanks all, you make my job easier

Last time I played a “real” amp was in 2015, when a few of my colleagues and I put together a band for the Department of Physics annual barbecue

IIRC I played a £110 Squier Strat into an orange head with an Orange 4x12 cab. I had mostly practiced with an early version of Amplitube.

We played relatively easy pop-rock songs but also jammed with little bits of shred hehe. I don’t recall having any particular problems adapting to a “real” amp, but maybe my standards for good performance were lower!

Now that you mention it, I haven’t played through a real amp since 2013, my last ever gig.
I don’t even remember where my amp and cab ended up! I’d not be able to play through it in my small apartment now anyway, walls are far too thin.

I don’t even remember where my amp and cab ended up!