Any body ever been reunited with a guitar you regrettably sold?

I waited 3 years for this guitar while Scott Lentz did his thing.
A few years later I had a brain fart and sold it.

Had the rare opportunity to buy my guitar back after five years.
Reached me today, I’m over the moon, to say the least.

I’m still trying to figure it out, to be honest, I was primarily of a single-coil guy up all my life. I can’t recollect the reasoning behind me ordering the guitar, I think some clips from ‘myspace’ back then caught my attention. There was a clarity of attack I hadn’t heard before perhaps. When I did finally get the guitar, I didn’t play it much!

The last three years, I played 9 to 12 hours most days, never missed a single day for the first two years. I played more guitar than I ever did in 25.

All started with a Friedman BEOD, soon after and quite accidentally YJM signature strat, again quite serendipitously to an RR100 & 1960B, the same thing happens with a DOD YJM 308. I was a willing passenger on this ride and loved every moment.

I would tell my self lies about the Croydon whenever I thought about it, I recently came across some old recordings on that guitar, instant and rather severe anxiety, think I just realized what that guitar was given my current frame of mind.

In that very moment, I called the friend I sold it to, he was gracious enough to get it on a truck headed my way the next day, I believe I teared up when he said yes.

The guitar arrived and looked like it wasn’t played for 5 years. I cleaned/polished it well, switched to my regular 8-11-14-22-32-46 gauge strings, redid the setup. Plugged in, I must have played for 10 mins before I recorded that clip yesterday. Fit like a glove. It’s a unique guitar, antique woods, single-piece back and top, no taper neck to my specifications, Brazillian board and, build by a master. It is lighter than my YJM strat, damn near perfect I’m happy to say, played it for hours last night unplugged too, it’s got a lot going for it. Fun times ahead 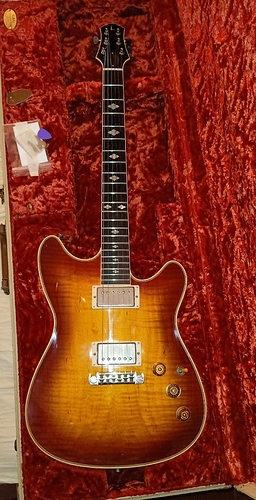 Notice the no taper neck, shoulders are done in a way that makes it more comfortable than a thinner neck.

Small clip after the setup, was just getting reacquainted

Apologies for spinning this track for a while, still working on the rest. Trying to get the details right.
This one might just become my go-to, opens up some new tonal possibilities for me, plus it’s a hoot to play, feeling a bit spoilt.

The only one I miss, for some reason, is my Ibanez EDR470ex with crappy EMG designed passives and a lucite body, I don’t know why exactly and I’d never know if I found the exact same one anyway.

As for me, I like what I have, but I particularly miss a gibson cs 64 es335 reissue, and a 57 R7. The latter was the best sounding LP I ever owned. Never got them back. Pedals yes, but guitars no.

As for me, I like what I have, but I particularly miss a gibson cs 64 es335 reissue, and a 57 R7. The latter was the best sounding LP I ever owned. Never got them back. Pedals yes, but guitars no.

You can say that again, Scott Lentz is quite something. This was a one off neck with my specs, he actually designed it on two blanks hand carved all the way, and then did the final piece with the correct wood, 60/80 year old cabinet woods were used. Been spending more time with it today, realize I need to keep the volumes on just 5/6 with the DOD YJM 308. Getting more clarity than yesterdays clip. Must the archer is a might fine pedal, that was a gift that arrive yesterday, can see what the whole klon thing is about, I think I might like it more than the 308, does that bloom thing very well.

I feel your pain on the lost guitars, there’s one real Spanish nylon that out there somewhere still.

The only one I miss, for some reason, is my Ibanez EDR470ex with crappy EMG designed passives and a lucite body, I don’t know why exactly and I’d never know if I found the exact same one anyway.

Some guitars just have that mojo. Can’t put a finger on it sometimes, I have a very unlikely 50$ acoustic that’s a lot of fun to play and record too.

There’s only one guitar I’ve ever sold that I regret selling, and if anyone ever sees a royal blue RG1527 with a “top secret” sticker on the face of the guitar behind the bridge, tell me.

I sold it to a buddy because I didn’t get on with the DActivator 7 pickups that were in it at ALL, and he was the one who put the sticker on it (it’s still here - he has a security clearance, it’s an official government sticker, those things are basically impossible to remove). He ended up trading it for something or other that he ended up not keeping. Today, we’re both kicking ourself, because that’s hands down the best neck either of us have ever played on an Ibanez 7 (and I’ve played some REALLY nice Ibanez 7s, including a RG7CST I owned for a couple years, and 'd rather have this 1527 back than the CST, which is saying something!).

I regrettably sold my Washburn A-10 many years ago, A Washburn A-20V made it’s way into my possession and I love this guitar more than the one I sold. Someday I hope I will be able to get another Yamaha SG3000 to replace the one I sold years ago, seriously miss that guitar.

Someday I hope I will be able to get another Yamaha SG3000 to replace the one I sold years ago, seriously miss that guitar.

There’s only one guitar I’ve ever sold that I regret selling, and if anyone ever sees a royal blue RG1527 with a “top secret” sticker on the face of the guitar behind the bridge, tell me.

The last three years, I’ve only played my YJM as it’s way better than the other two strats (to be fair they are great guitars in need of new frets, etc).

Now I’ve got two amazing guitars that I’m torn between. I’ve done no constructive playing as such, learned a bunch of classic rock riffs from AC/DC, etc on the Lentz, a lota fun, but I feel I’m cheating on my YJM strat.

Guitar polygamous lifestyle gurus, how do you manage it?

I had a Parker Fly Hardtail that I sold in the early 2000s. I had a Vigier Excalibur that I also sold. Both were great guitars and were absolutely rock solid in their set up.

Sorry to hear that! Both are great modern instruments.

I had a Vigier Excalibur that I sold. Was a great guitar, lowest action on that perfect neck. My case is the opposite on that one though, I sold a perfect Multiac Duet for it, that Godin was something else, forgot all about that… dammit! That multiac duet had serious mojo, anything you did on it was musical, very much like the Lentz in that regard.

Years ago I sold the first new guitar I bought with my own money, a blood red Kramer Baretta. Miraculously it came back to me last year, but it took allot of work to get it playable again. I play it often and I’m overjoyed that it is home where it belongs

Those were sweet guitars! I know just how you feel.

Not sold but gave a Gibson SG to a friend who wanted to learn to play not expecting to ever get it back. He had it for 3-4 years and then decided to give up playing and sent it back to me. I just put some new locking tuners on it and it’s pretty fun to play. Next I want to give a try at paining the body (it only has a light stain from the factory.). It’s becoming a bit of a project guitar now.

I’d love to own an SG, I’m going through an ACDC phase! If you use a proper marshall do look up SoloDallas Storm V2, it seems to be a unique take on a forgotten idea.

Also sold my 10 string Chapman Stick which is sorely missed. I now realize what an idiot I was and have never sold another major piece of gear again.

Hi Dave, I’m hoping you replaced it with something better, it helps seller remorse.