I was very interested to hear MAB talk about learning to alternate pick using an ascending, four-string, major scale run, as shown in this clip from the 2007 interview: 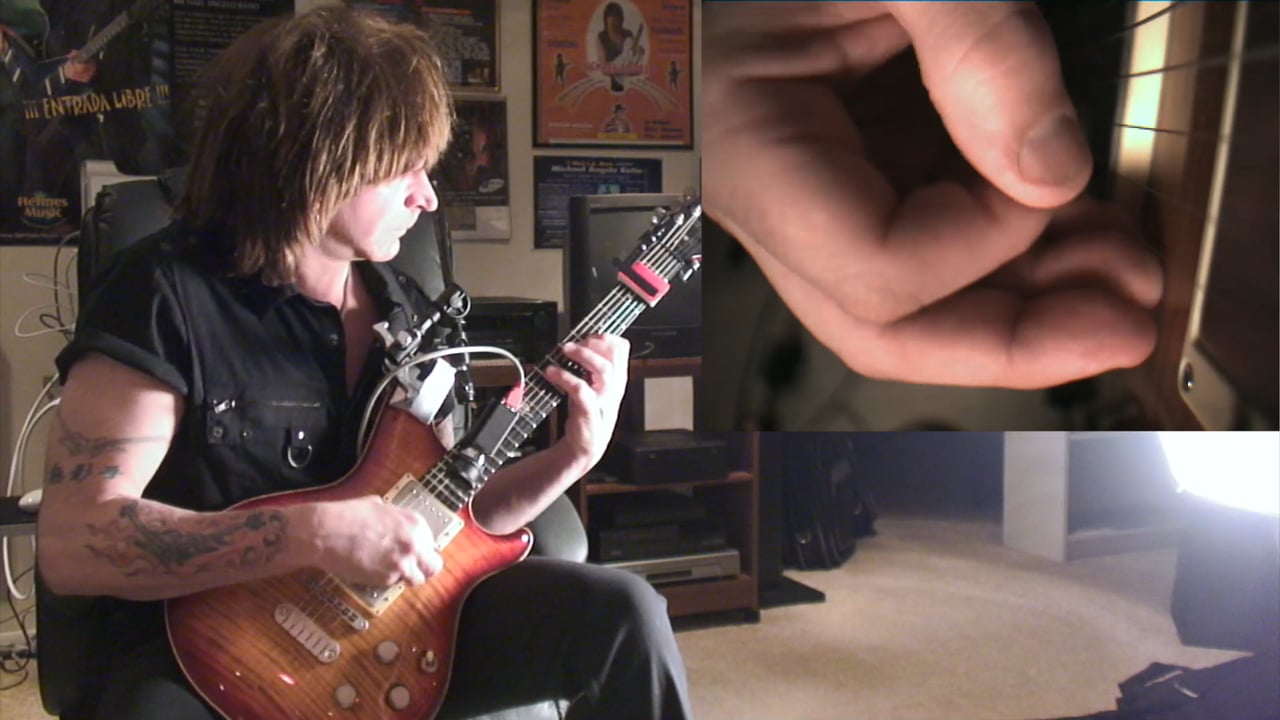 But, when watching and listening to it at slow speed (and slowing down the slow motion…), I quickly got confused.

The part that was bothering me is that MAB clearly plays two notes on the D-string, which makes sense given that the root of the scale is the second note of the 3-note-per-string pattern. But the tab shows the notes as 6-7-9. Adding to the confusion, I just wasn’t able to figure out how the two notes were being picked based on the video.

Until… I realized that the first note that MAB plays is a muted downstroke. It’s audible, but I was initially ignoring it (subconsciously) since the root note was clearly intended to be the first note (musically). This makes a lot of sense in that it enables MAB to start the scale (the second note) on an upstroke and then cleanly change strings after the first two notes.

But… Why do it this way? Why not start with the next higher pattern on the neck, play all 3 notes on the D string, and start with a downstroke? Or, alternatively, why not just start with an upstroke?

I guess MAB prefers this pattern because it’s nice in that it avoids the W-W sequence on a single string. That part makes sense to me; it’s convenient to avoid that stretch when the intention is to focus on the picking. Or is there a different reason?

I’d be curious to hear any thoughts people have on the subject.

There is a ‘click’ audible at the end of the last note that sounds similar to that ‘muted’ pickstroke. Could it be a strange audio artifact from the recording process and not actually the sound of the string being touched? This was filmed with @troy’s old rig which I believe was incredibly tedious to use (required Troy to write some coding for the software I think- am I making this up?) in comparison to the phone/magnet setup used now.

Or MAB messed it up!

Hi! Sorry for the confusion. It’s not muted. He was using a footswitch to turn his rig on and off, lke a gate - the same way high gain players will quickly roll off the volume knob at the end of a phrase. In a few of these examples, he hit the footswitch just at the moment he started playing the lick, causing the first note to go missing. You can see that he plays it, but you sometimes can’t hear it. This is also why you hear a click at the end of these phrases. That’s his footswitch.

Ah… That makes sense. I was being thrown off because the second note is the root and it just sounds so intentional.

Thanks for the explanation!

There is a first for everything lol!

It has given me a flashback to when I saw him in a clinic about 10 years or so ago - even live he would stomp his rig on an off - even mid song. It seemed OTT at the time, but he seems the sort that wouldn’t compromise anything technique and performance-wise.