Having not being able to play guitar for over a week and still feeling pretty crappy about EVH’s passing, I fancied trying to learn and hack my way through the Beat It solo (one of my all time favourites). I recorded my 1st proper attempts on the camera as I’m trying to video log my playing more. I’m also trying to get rid of some awful ‘red light’ syndrome that has snuck up on me over the last few years (never used to be an issue) and thought it would be good to be brave and post it for the sake of it.

Its not great - wrong notes/phrasing, shite vibrato and far from what I want it to sound like, but its been fun to not take things too seriously. Its gone midnight here so also recording at super low volume so audio on my phone is particularly lacking.

Hopefully, I’ll keep at this one and post any progress - maybe one day I’ll do it some justice! 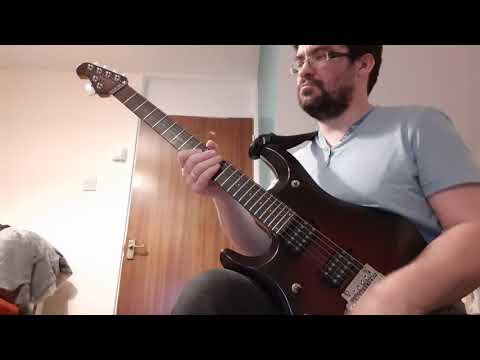 Nice! And good on you for being brave enough to post! Still can’t bring myself to do it, lol. Seems like a pretty accurate transcription to me but I haven’t given that song a good listen in awhile. Looking forward to what you do with it next.

I think EVH himself recorded this in several takes that were later combined together, so this is definitely not played poorly

Yeah, I have always been a little unsure of the legend of him sitting down and laying it down in 1 or 2 takes. But the solo is just so magical in a raw, blistering fashion (as most of Eddie’s playing always was) that I still want to believe that legend.

Thanks @s_linste for your kind comments. Well, despite being a fan, I never really dedicated a large amount time trying to play Eddie’s stuff. What is very clear to me as I try to learn it, is how much my fretting hand sucks! Espcially any rapid fire blues based stuff and bending lower down the neck. There have been long gaps in my playing over the last 10 years, which doesn’t help. Totally dominating the ‘stretchy’ lick is something that I would love to do and I don’t think many people do it quite right. I hacked my way through it here, but there is definitely in the ballpark when I do it well.

I LOVE this solo by EVH. Still blows my mind when I hear it - how you would come up with something like that?

@tommo - do you know anymore about how this solo was constructed? Or have any info on it? I have looked over the years and have found very little.

Two takes and he is done in twenty minutes is what I have in my magazine.

So much of the picking and the legato of this solo are just above the speed of 16th notes, which is always tricky when you are trying to learn to get your fretting hand up to speed because you want those natural divisions of speed and he is pushing beyond those even breaks.

I’ve heard this often too. But idk if I believe it. Eddie also said in his own words, (paraphrasing here): Who’s guna know I played on this black kids record.

MJ was not just some random Kid at the time to say the least. And Ed is known to say things to throw people off or to enhance the mystery around his playing. He also apparently recut the master track rearranging the song. I think he put more effort into it than is let on. I doubt he would want to do a bad job. But I wasn’t there so I could be totally wrong.

Nice @PickingApprentice. That seemed really relaxed for you.

So much of the picking and the legato of this solo are just above the speed of 16th notes, which is always tricky when you are trying to learn to get your fretting hand up to speed because you want those natural divisions of speed and he is pushing beyond those even breaks.

Yes, definitely. My method for improvement is going to be getting the stretchy like supremely confident at 16ths (just beyond the tempo of piece, as you say) and then focus on the ebb and flow of the line - get the balance of fluid and fire!

Nice @PickingApprentice. That seemed really relaxed for you.

Haha! If only! I’m not gonna lie it was fun,but definite poker face going on! It was the best out of about 10 takes.

You’ve got the tapped harmonics and the whammy bar stuff sounding authentic, which is not easy. Those big stretches 12, 15, 19 are really good for improving legato playing. There’s a similar 12, 15, 19 in When Push Comes to Shove which is another great solo filled with legato.

Yeah, the big stretches are difficult as I don’t have big hands. Waking up this morning my fretting hand felt like it had been working out. I might have to start hanging the guitar on my chin to help!

As for the whammy, I’ve always found that relatively easy to do. Its very fun indeed and I find the less I think about what I’m doing with it, the better it turns out.

I have smaller hands too and eventually I managed to get there. It’s about shifting the thumb on the back of the neck very slightly to find the right positions. It’s something that comes over time. I’m one for doing something for a short time and then moving on to another technique. I’m not sure lots of time on one thing is good for hands or memory. I think you’ll get there.

Nobody likes a show off.

Lol thanks. Its not that obvious because of the angle, but I actually used the EVH style tremolo forearm motion. Its very efficient, but can’t for the life of me do it on any other string than the high E.