In the video below, Uncle Ben asserts that wrist- and forearm-pickers may have difficulty with Hybrid picking because their middle finger (doing the pluck) is moving around with the hand. Then he demonstrates a Circle/finger movement technique that leaves the middle finger more stable instead of having to hunt for the proper string to pluck.

Upon reviewing Nick Johnston and Andy Wood’s Hybrid videos, they do appear to have more circle finger movement in their Hybrid picking than in their alternate picking.

Thoughts from the group? 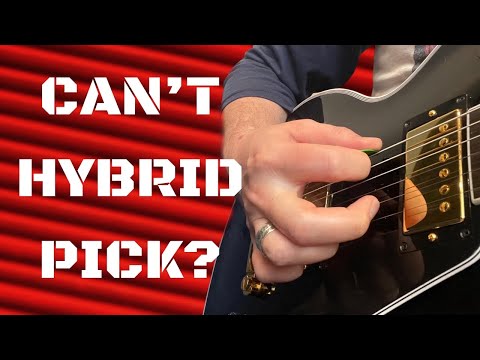 The reason I ask is because I’ve recently made a significant leap in my alternate-picking technique with a fixed thumb/index posture, and I’m hesitant to start practicing a mechanic that requires motion there. Any inputs greatly appreciated.

I’ve learned over the last number of years that learning new motions often strengthens the previously established motions. Don’t be afraid to try new motions, it won’t ruin anything you can do now (I used to be afraid of this).

Don’t be afraid to try new motions, it won’t ruin anything you can do now (I used to be afraid of this).

Agreed. Adding in a motion that allows you to hybrid pick, won’t undo or hinder what you can do now. Go forth and experiment!

I’ve been working on Rick Graham’s instructional material after a long stint working on my alternate picking and I was a little apprehensive since he’s using thumb pressure behind the pick for string changes, but it feels so different that I think it doesn’t interfere with alternate picking technique. I think the same will hold true for hybrid picking - I also have his hybrid picking material and assume he uses something similar to what’s here.

I’m actually gonna go out on a limb here and say - I think it might be better that distinct techniques use distinct motions/muscles/joints where possible. It makes each technique mentally and physically very recognizable. My alternate picking being very different from economy is a feature rather than a bug, using thumb to guide the pick in economy and hybrid makes it a fresh technique that feels fresh and that means a whole new set of habits to form, and little overlap with anything else that might get confused or get in the way.

I don’t know if I’d say it’s required… but I do know that who I’d consider to be the most technically skilled hybrid picking player in the world at the moment does use circle picking/thumb and index motion for the majority of his picking.

Pasquale Grasso is an absolute monster.

Zakk also appears to have thumb movement when he hybrid picks, although I can definitely see a little forearm wiggle as well: