I’m not sure if Cynic/Paul Masvidal’s “double picking” technique has been discussed here, but it’s a technique I’ve been trying to get for many years with no success. Many of the guitar parts in newer Cynic songs are basically arpeggiated chords where each note of the arpeggio is picked twice. It’s a cool sound that I don’t see many prog or metal players using, and Paul mixes in chromatic passing notes to give a sorta fusion/prog sound to their tracks.

The track I’ve been trying to learn is “The Space for This”, which we can see Paul play effortlessly here, with tons of really great angles on his right hand: 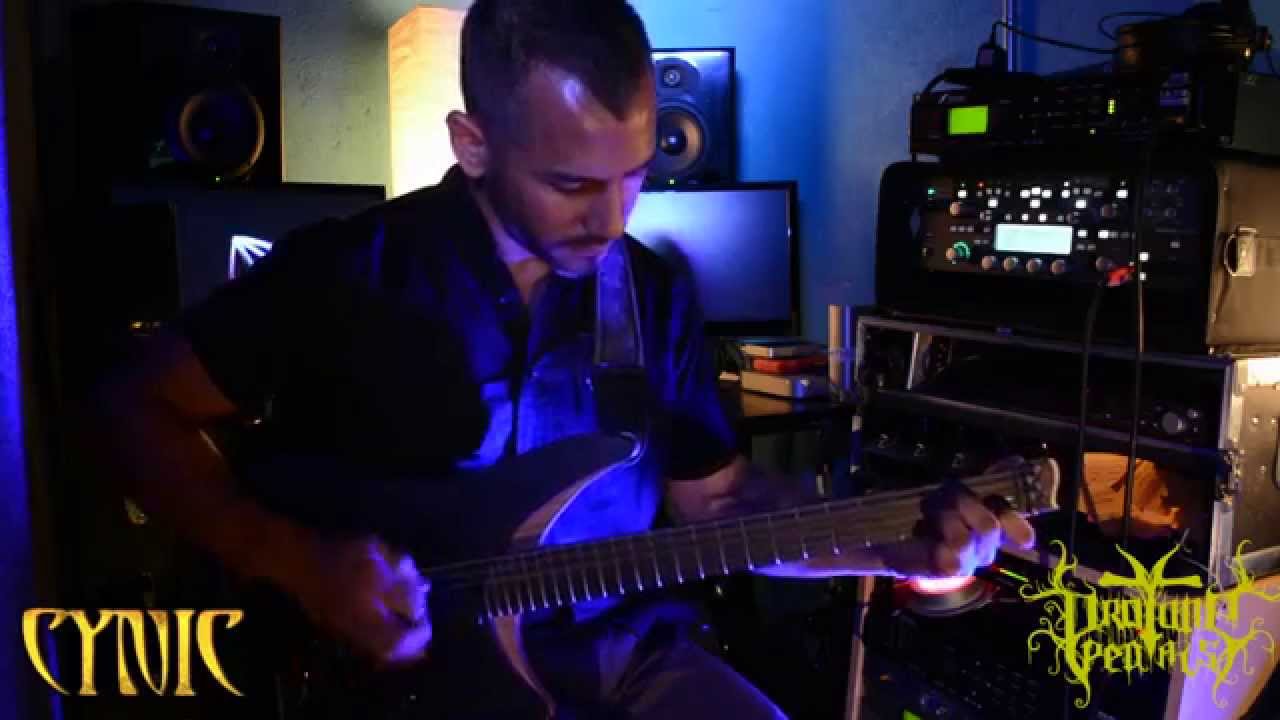 The track is roughly 140 BPM. No matter how much grinding I do, I can’t get this thing past 115-120bpm. I’ve played for ~22 years. I’ve gone through most of the primer and assume it’s because I’m string hoping, but my eyes can’t quite spot the motion yet.
My current approach to trying to get this down is the thought that if I can downpick it at tempo, then I should be able to alternate pick it at tempo by treating the up pick as an afterthought. I can easily downpick the song in 8ths to tempo with no issue, but I just can’t seem to harness the motion that’s already being used to pull back my pick to get it ready for the next downpick.

Here’s a regular+slow motion video of me downpicking the riff in 8th notes roughly at tempo: 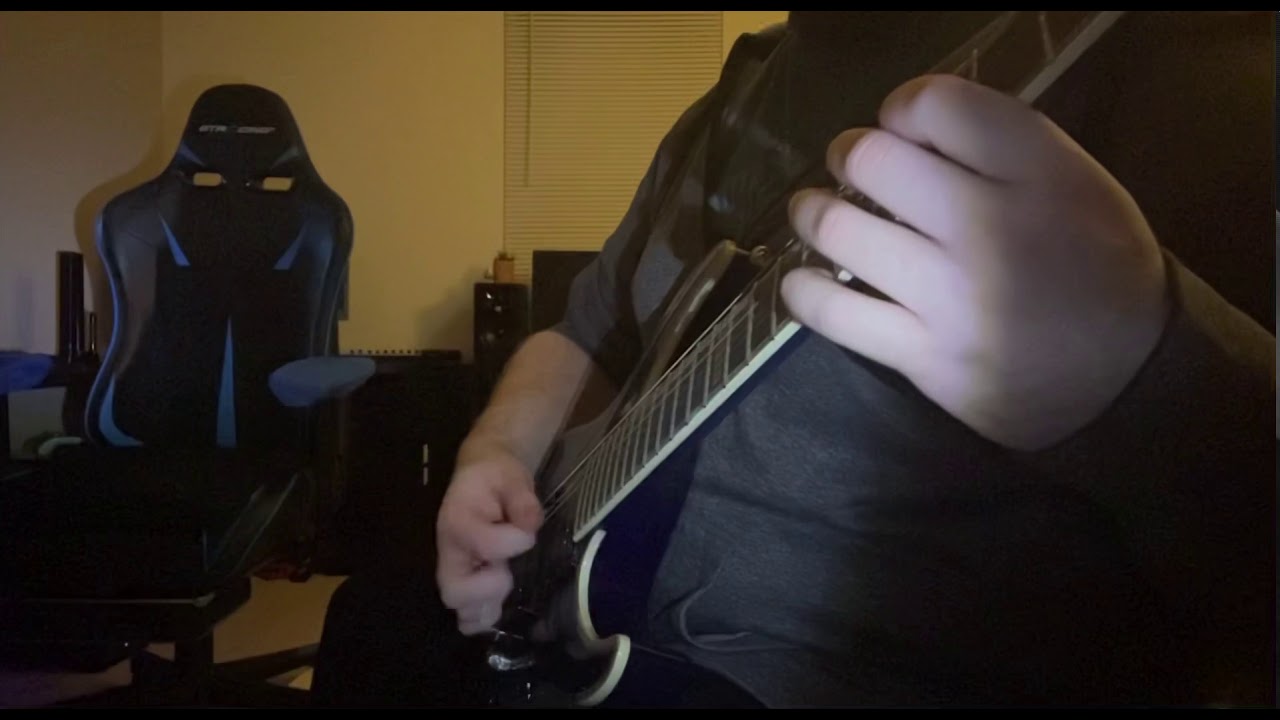 Here’s a regular+slow motion video of me struggling to alt pick it at around 110bpm or so:

I will note that my normal speed picking motion is elbow picking - I grew up with metal/death metal and always used my elbow for tremolo picking, but I’ve never had much luck controlling it to where it locks in with each note. When I’m not trem picking, I use the motions above but I obviously have a huge hole in my playing between controlled 8th notes and mindless speed picking. I’ve never been able to lock in controlled alt picking and have gotten around this limitation with sweeping, economy picking and legato.

I’ve been trying to use the wrist motions in the primer but am having issues translating the table tapping speed (which I have no issue with) into an actual motion on the guitar. The moment my hand gets into position on the guitar, it feels like my wrist loses the ability to use half of its potential motion.

Anywho, thanks for any help you can provide. If I can correct this issue and get to a point where I can play this song, it will be an extremely huge milestone for me.

Riff sounds cool (I’ve never listened to Cynic before)! I’m not the best at analyzing, but you might be “string hopping” when you alternate pick it. I’ll wait for someone else to chime in before I throw out suggestions.

I don’t think there’s any special technique involved. He’s picking each note twice (D U) and then moving to the next one. Any single escape technique will do as long as you escape after the second stroke. For USX, start on a downstroke, DSX, on an upstroke.

I don’t think playing all downstrokes is going to help you, but that’s just my opinion!

@Johannes is 100% on the money here. However, since this is metal, USX will likely get you farther here. DSX with these types of riffs might trip you up once you start to integrate double picking within a variety of metal passages, since most metal is USX because of the constant even number of notes on one string starting with a downstroke, for both momentum and rhythmic purposes. You could start on an upstroke, but upstrokes typically feel weaker for these lines. It will be much harder, and FWIW I’ve never met a metal player who intentionally does this.

Also please pay critical attention to what @Johannes said about downpicking being inappropriate here. There is a HUGE misconception that any riff you can alternate pick, you can downpick, and vice versa. This isn’t true - at all. They are not interchangeable techniques you can swap between for any given line. Downpicking is a subgroup of alternate picking and needs to be applied when it is mandatory/appropriate. Here it is not… For lack of a better word due to the speed and type of line, it is … wrong … and it will cause your arm to horribly tense up. If you’re familiar with Meshuggah’s “Bleed”, it’s like when people use the D-U-D-D picking pattern instead of the D-U-D-U solution. You simply will not be able to keep up with Meshuggah; in this case, playing Cynic’s double picking lines with pure downpicking will cause you to burn out in a matter of seconds and feel awful pain.

So if you bounce between practicing downpicking and alternate picking for this riff, literally half the time you’re practicing mistakes and the other half you’re doing it correctly. It’s no wonder you’re struggling! So the solution is simple: Never downpick it again! Stick with alternate picking starting on a downstroke.

heya, i used to struggle with these lines too. One day I realised if I literally just practiced getting 2NPS pentatonic scales up to speed, its basically the same technique. The USX Eric Johnson technique (ascending) that troy describes is pretty useful for this stuff. Also, start with an easier song - the intro to How Could I? is a lot better of a start to the Cynic ‘double picking’ idiom.

Honestly, I don’t think this is true at all. In metal you find all sorts of things - different picking techniques, picking paths and different kinds of riffs. The double picking style and the old school death/black metal style with the four notes per string is just one kind of riff out of thousands of possibilities. In fact, there are thousands of metal bands, metal songs and metal styles where you don’t find those riffs. And even when you have these riffs, there are plenty of players who swipe them or use tiny helper motions. One of the most prominet examples who is interviewed here and discussed here on a regular basis is Brendon Small with clearly an elbow tremolo. I don’t know how he is switching strings, but I don’t care, it sounds good to me

I think it is hard to generalize anyway. Even players who we think they are doing USX, seeing them from the audience, can probably be in fact DSX, just because wrist movements look very similar from the audience point of view. Because wrist DSX path picking in the form of Di Meola, Wood, Gilbert etc. is so common and because it is so obvious when starting to pick on a guitar. Of course, USX is common too and also obvious and can be executed with the same hand position like for DSX.
In addition, many metal players I have seen live and on video tend to incorporate or switch to elbow at high speeds, too, which is DSX by default, unless you have a helper motion. I would say metal DSX or USX is 50-50.

By the way, I don’t want to complain about your answer per se at all! The tip for this special occasion is dead-on, but this detail about USW/DSX I find misleading. Maybe it is dangerous for players seeking their smoothest picking technique. Some could think, they NEED to do USX to play metal and try hard, make stringhopping and get discouraged although they possess a perfect DSX motion.

As an example: Paul Gilbert, who by the way played speed metal with Racer X, performing the standard tremolo picking on a low string. DSX is more than obvious

FWIW I’ve never met a metal player who intentionally does this.

Me neither, but for instance, in one of the Andy Wood interviews when he plays pentatonics, he says he starts with a downstroke, but starts with an upstroke unconsciously. What I am trying to say is, maybe we never met players who do this, because they don’t know that they do this

Cynic rules, highly recommend checking them out. The musicianship and the way they blended elements of death metal with fusion and prog rock was wayyyyyy ahead of its time within the scene when they dropped their '93 album Focus.

I’ve been meaning to, I mostly found out about them from the signature Strandberg which I was tempted to check out lol.

Oh yeah that guitar is beautiful

Honestly, I don’t think this is true at all.

I may be misunderstandng, and apologies if so. But I think @guitarenthusiast is referring to which pickstroke goes on which beat, not which string changes are present in the riff. Ninety five times out of 100, in rock riffing, it’s downstroke on downbeat. Like bluegrass. (Ha.) In the Racer X song Techncial Difficulties, for example, where you have upstroke and downstroke string changes inside the main riff, the downstrokes are still aligned with the downbeats.

Sure it’s possible to play upstroke on downbeat. But that seems less common in metal riffing. Imagine playing the Crazy Train verse pattern on the open A string with upstrokes on the downbeat. You don’t see that as often.

Al Di Meola’s “Race With Devil On Spanish Highway” is upstroke on downbeat, which is interesting. I think it’s for picking reasons, so he can do the patterns with outside picking. But I can’t think of any heavy riffs written that way.

Sure it’s possible to play upstroke on downbeat. But that seems less common in metal riffing.

This is of course true. Sorry @Troy and @guitarenthusiast. I think the misunderstanding is on my side. the post sounded to me like one had to know how to USX to play metal. But of course, heavy riffs line the downbeat mostly if not always with the downstroke.

Moreover I mixed it up with referring to playing things like scales, melodies and pentatonics starting on an upstroke (without knowing it). On the other hand, the kind of ±4nps tremolo-riff I am referring to often builds up a melody line… so it’s between riffing and playing leads. I saw some black/death people clearly playing those with elbow and I asked myself how they switch strings, assuming they execute DSX because of their elbow mechanic.

(Of course they can swipe or have a helper motion)