Would love to buy one

Except… that we’ve sort of moved away from this. What we’ve noticed actually is that great players like Andy Wood don’t actually do the rotational movement all the time. For Andy, it’s only during inside picking, and only during ascending inside picking, that he even does it. In other words, it’s only when he plays an upstroke and goes to a higher string that he uses any arm motion. At all other times, he uses wrist motion with no turning of the arm, the pick doesn’t rotate, the “pickslant” doesn’t change, etc.

That’s why we’ve stopped using the term “two way pickslanting” to describe the picking motions, because you can make these motions happen all sorts of different ways. Ultimately, it’s a win because some of these ways are simpler and less dramatic than trying to roll your arm around a lot.

Sorry for the confusion! Fun times while it lasted. The real world ended up more complicated than we thought. But in that complexity, we learned how to make the playing a little easier.

@Troy what about "D U D(escape) U D U(escape)? That t-shirt may remain up to date for longer

Thanks Troy. Yes I’ve been following your work since the early days and we’ve indeed learned more about pick motion mechanics and our understanding/terminologies have changed.

My T-shirt would likely look like this, where this is two 1-string TABs lined up on top of each other: 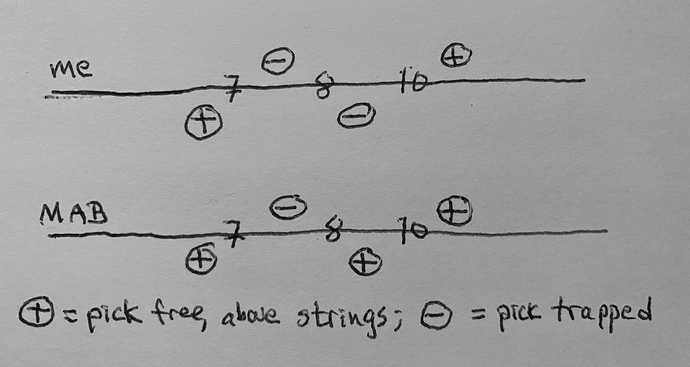 @tommo have I got this correct?

All jokes aside, I definitely would buy some merch!!!

But these joints and how they interact can be quite complicated!

The wrist checklist is true for sure based on what we know. I think it then follows that forearm+wrist should also tick all the boxes.

Elbow alone, as far as I know, can only do DSX - but I am not sure what happens when you add the shoulder

Thanks tommo. Like you said , in the real world the joint interactions are more of a mix/blend.

However, I think its worth having a cheat sheet or a summary of what we know about escape motions and joints somewhere on the forum.

Also I’m not sure if there is DSX version of ‘Forearm+Wrist’. Troy?

The reason I grouped elbow and shoulder is because I feel like I play in this manner (i think). I have a recent thread on Tommy Emmanuel which talks about this. I’m not sure what the conclusion is on this.

Anyways @Troy could chime in on the cheat sheet and help us out here.

Also, does this mean that wrist motions are the most versatile?

Sorry, if the topic has shifted a little from the “Gear/merchandise” thread

I’ll be honest, I don’t love the spreadsheet idea. Out there in the world there’s probably a way to do everything from everything, so you may as well make a spreadsheet with everything checked off. More generally, a chart places the focus on a hundred interchangeable technical parts and options, which is not really how I think these things are learned best.

To me, the best instruction is done by communities like Gypsy, where they give you a simple, top-down explanation of their style which is very hands-on. Hold the pick like this, anchor like this, move like this. Less think, more do. This is what we’ve been aiming for lately in the Primer. The latest sequence of forearm-wrist lessons we uploaded treats that approach as a self-contained style, with its own instructions for grip, anchoring, movement, and so on.

If you follow that sequence and the motion you end up with is slightly different than what the sequence teaches, involving some blend of joint or motion, but it still works, great. If the sequence is able to lead people to these small variations by providing solid instruction on the bigger picture first, without them needing to overthink the smaller ones, that’s probably similar to how that best players learn on their own.

So ultimately, techniques taught as styles rather than a checklist of options. If there’s a “cheat”, it hopefully lies in boiling down this very complicated subject into a smaller number of easily understood approaches — a few in wrist, a few in elbow, and so on — that a person can try out in a hands-on way, without a huge amount of analysis paralysis. We’re not there yet, but that’s the goal.