I’m new here, just subscribed to the site and I’ve been watching the Pick Slanting Primer.

I thought I’d make a post about Dave Kilminster because I think his mechanic is different from any of the ones I’ve seen under the magnet.

For those who don’t know him, Dave is the guitarist for Roger Waters and until recently Steven Wilson (and Keith Emerson before that). I was lucky enough to be taught by him at the Academy of Contemporary Music (ACM) back in the early 2000s before he was as well-known as he is now. The students all knew him as a fearsome player. Guthrie Govan was also a tutor there at the time, also mostly unknown. Guthrie had a monthly residency at a pub in his hometown and Dave K would dep for him when he was unavailable.

Dave’s picking seems to come from his elbow but unlike the other elbow players discussed in the primer, his wrist swings freely, not locked. Here’s a video I’ve found which gives a reasonable look at what he’s doing. The camera angles are sometimes frustrating, but everything is here:

15:30 discussion of his picking

16:00, 16:05 tremolo picking demo. His elbow is still not quite in shot, but you can see that’s where the motion is coming from. You can also see here the same kind of ulnar extension that Troy talks about with other elbow players.

Slow picking demo at 16:47, looks entirely like wrist motion. I’d say this is not the motion he uses at speed.

17:17, another tremolo picking demo. Here you can’t see his elbow moving, but you can see his wrist is moving, and this is the secret of his mechanic.

17:34 Extremely brief wide angle shot of tremolo picking where you can see for a second the elbow and wrist motion together. After this he explains how he thinks he does it. He says “forearm” but he’s clearly not talking about forearm rotation as we refer to it on Cracking the Code; it’s more an elbow motion. At 18:52-18:58 he does some mimes which make it clear how he thinks his mechanic works.

There’s also this performance of him covering Shy Boy:

Sadly there isn’t much alternate picking in Shy Boy, at least as Dave plays it, but at 2:58 he does some tremolo picked octaves. They’re not at shred speed, but I think that is a clear view of how his mechanic works.

I’m interested in elbow picking because it was all I did as a teenager. Then I (despite Dave K’s example at college) concluded this was Wrong and Bad and never did it again. I had a go recently and after a few seconds I felt like I was about to snap my arm off—my shoulder, elbow and wrist all felt like they were going to fall off! Clearly I need to find a new approach to doing it without injuring myself.

Welcome to the forum @CaptainRock, and thanks for sharing!

Very interesting technique and pick grip, and that hand/arm position reminds me a little bit of Joey Tafolla (even though the latter does not seem to use the elbow as much):

when I watched it he seemed to lock up his wrist like in the last few times around with that tremolo octave part. I forgot to add you could use elbow and not tense up as much but I think all the hyper picking dudes will tense up most likely or at least lock the wrist and flex a little more when going at top speed to be more aerodynamic.

It is Dave’s tab of Robben Ford’s ‘Aint got nothing but the blues’, which he said at the time was the hardest piece he had to play for Guitar Techniques magazine and his favourite guitarist, that got me into Robben.

I play with forearm rotation too, and that doesn’t look like what Dave is doing and that’s not what he describes. He doesn’t say forearm rotation, he says his forearm is moving. Which it does if you move your elbow. There’s clearly no forearm rotation in any of those close ups. At 17:17, the wrist movement you can see is deviation.

when I watched it he seemed to lock up his wrist like in the last few times around with that tremolo octave part.

Yeah, for some of his fastest tremolo picking the wrist movement does seem to decrease or disappear. It’s one of the pitfalls of asking players to describe what they’re doing at speed—most of them have no idea. Dave kind of admits this in his discussion when he says he’s not entirely sure where the picking comes from.

I see what you mean, that the elbow moves side to side which then powers his wrist which he says does not move. You would need to get a better look than this, as my forearm rotation looks like elbow motion, but its not.

I just thought of this clip from elsewhere on the blog.

This does ask a further question about the difference between elbow movement with and without forearm rotation. I think that remains a question to be answered.

Hi! Thanks for posting. There is often a coactivtation between wrist motion and elbow motion. Andy Wood talks about this in our first interview with him, and even though he’s a wrist player, you can also see a small amount of elbow joint motion when he fires up his fastest wrist playing, and he says he can feel it.

Also, in the various things we’ve done with John Taylor, his slower speed picking looks more wrist and his higher speed playing looks more elbow. And there are times when it appears they are both moving as in Andy’s case:


We’ve measured John in a laboratory setting and the tests seem to confirm that the motion becomes more elbow joint at higher speeds while wrist motion tapers off. But this may also happen more when he begins to fatigue, as his motion sort of looks more “elbow” toward the end of some of these long tremolo takes than at the beginning. I don’t remember if they commented on that.

More generally, what we learned from the other interview we did, at the Hospital for Special Surgery here in NYC, is that this type of multi-muscle activation is super common in everyday activities. Their term for it is “couplling”, and it is, for example, how most wrist motions work. The wrist is really a complex of muscles that fire in various combinations to get the different angles of motion your wrist can make. We’ve also noticed that lots of forearm picking motions are coupled, involving motion at both the wrist and forearm joints. You can tell this by looking at the motions paths, which usually have a shape that neither joint could make on its own: 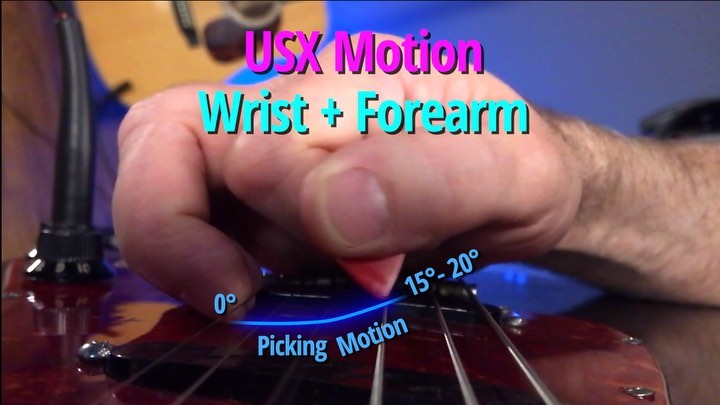 On a related note I would say there doesn’t really look like there is any forearm joint motion in this clip. This looks like elbow to me.

I know we have a tendency to use terms like “loose” or “freely” when describing picking motions, as though the motion of one joint causes another one to move around passively. But I don’t think that’s very often the case in picking motions. When things move like this, they move by muscle activation, and when you see two joints moving at once, it’s because both of those muscle groups are actually firing, even if you can’t feel that it’s happening.

In general, I’m a fan of elbow motion and we’ve seen players like the awesome @bill_hall do great things with it. Whether you do some wrist with that or not, I’m not sure what that adds unless maybe you’re using wrist motion strategically to get the “other” escape, as I think some players do. But if the two are simply firing together to create a single-escape motion, as it looks like here, then I’m not sure if that’s necessarily any better in some way than just moving one or the other joint.