Hey @Troy @Brendan and everyone else

Ok so this is something that i have struggled with for EVER!

This is all alternate picked. the bit that kills me is the last 16th note of beat 1 and the following 3 16th notes.
Ive tried everything and it never feels like i have ever conqured the move?
Some days it feels ok, other days its like somebody swapped my hands and i can’t get it clean at all.

I recently watched the wrist motion section of the pick slanting primer. It helped a bit but still didn’t fix this problem.

I’m unsure if this move is more of a cross picking move and/or if i should i be rotating the forearm slightly at this point in time?

Its these 4 notes here 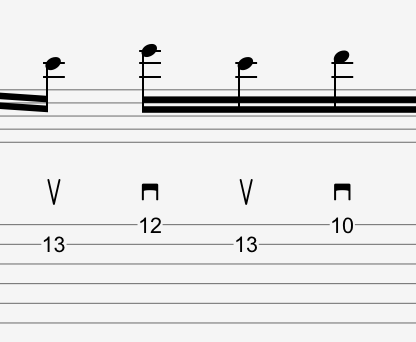 if you stay downward pick slanting and plant the outer side of the palm heel on the bridge then the pick gets jammed so you have to string hop.

If i rotate my arm slightly to allow myself to switch between outer palm and thumb heel alternatively for each of these notes i can sometimes get it clean. However i then notice that once i start this rocking/key turning in the door motion i end up doing it on every note from then on

I’ve tried to use a curved picking pattern for these 4 notes (ala cross picking) but it seems very laboured.

Ive honestly been struggling with this double inside string shift since time began.
Any advice would be great

Can you rearrange it in such a way that it uses mechanics that you find easy?

If your left hand is up to it, could you ‘left hand tap from nowhere’ fret 13 notes. If you are playing with high gain and lighten up on the picking of fret 12 and 10, it might not be obvious that you didn’t all the notes.

I could but i’d never forgive myself lol

@Prlgmnr’s response is probably the most important question, i.e. is this about the notes or the ability to do the mechanics? If it’s just the notes, there are always multiple ways to do something, including non-picking things like hammers from nowhere on one of these notes a la Shawn Lane, Holdsworth, etc.

If you just want to learn the picking movements I wouldn’t think of any of this as “doing pickslanting”, per se. One of the goals of the new wrist section is to show you that you can access both types of string changes from a centralized arm position. We’ll be adding more chapters to that section over time to show you how to switch between the two types of pickstrokes.

And for phrases where you need both, you do both, by going right, then left, then right, and so on, in whatever order you need. Flip flopping between the escape types generates a double escape motion, but again, you don’t have to think of it that way. You can just think of it as what happens when you switch motions back to back.

I want to get the mechanis of this move more than anything as its a weakness in my playing.
@Troy

Thanks for the video would there be any chance of you trying the example i have tabbed above to show me that its possible haha? pretty please with sugar on top

the other strange thing is it seems to be harder to do the double inside picking on the b and e string?
I seem to get it a little more consistently on the middle 2 strings??

If you find things easier on certain strings rather than others, it could be that you need to reposition the hand/arm to be closer to the string you are playing. Keep in mind that when you play on lower strings, your anchor point — if you are using one — is very often on the body. And this creates a slightly different form than when you are sitting on the bridge or strings. Both forms work fine, but they are slightly different and it’s worth appreciating that you may need some trial and error to become comfortable with both.

Re: left / right vs USX / DSX, they are the same thing. I’m just saying, when I think about switching from a DSX motion to a USX motion, very often, in my mind, what I’m doing is thinking about going “more right” and “more left”. Here’s another clip we filmed for someone on the forum, I forget which thread. But here’s what it looks like when you switch from one escape to the other with the centralized arm position:

Essentially what we’ve learned is that when you use a shallow escape path, 10-15 degrees, and you use edge picking, you can completely switch the direction the pick is moving with no, or very little, alteration in the arm position and the grip / pickslant. This works with any of the arm positions and grips we teach in the new wrist chapters. Because all these setups satisfy the two basic requirements, i.e. shallow escape angle and edge picking.

What this means in practice is you can play the kinds of lines you’re asking about, where you have little bits of inside picking between two strings, and also more general mixing and matching of escape types, just by changing the motion as I’m doing here. This kind of thing comes up all the time in jazz and country, where you have those clichés where you do two-string major or minor thirds sliding down chromatically. There’s some of that in this clip we put up yesterday, and also lots of switching of escape types: 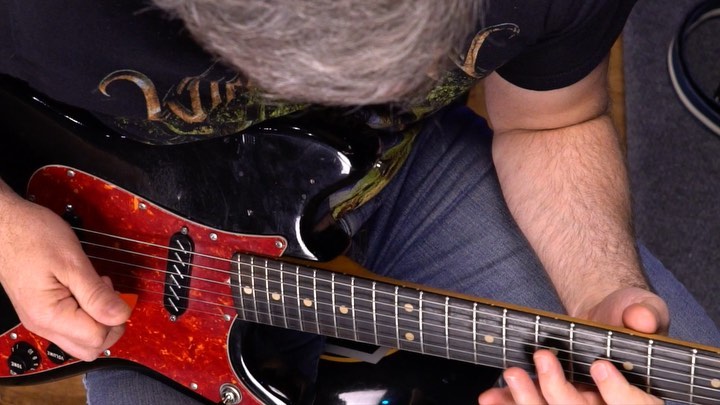 By contrast, the arm position you would use for something like Gypsy picking gives you a much more inclined motion path, more like 30-35 degrees. There’s no way you can compensate for something like that with edge picking alone. So this is why the pickslant is more visible, i.e. because it’s 30 degrees and not 10 degrees, or 5 degrees + edge picking. This is why you Gypsy form looks more “obvious” as to what is going on with the slanted motion and grip.

thank you so much for taking the time to reply with such a killer response! Ive just been working the more left/more right approach. i know its the same as pick slanting but mentally it just feels different and has stopped me flopping the pick. I can already see an improvement after a few minutes. I always thought it would be something simple in theory but i just couldn’t figure it out. The escaped d pick stroke that is facilitated by the ‘more right’ approach seems to have been the element i was missing. Strangley enough the new awareness of this has made my upward escape pick stroke (facilitated by the more left approach) more solid too. The chunking in my mind has changed and i feel like in half an hour i will get this sorted once and for all.
Before hand i have just been bulldozing my way through trying to overcome the challenge with reps. Sadly this never works if the technique is incorrect in the first place.

ps the clip from instagram with the country stuff…holy s**t your playing has improved sooooooooooo much!

Not a problem. I would mention also that ulnar offset seems to be important here, at least with this particular “lightly supinated” arm position. When I go too radial, I feel more need to twist and turn. When I’m operating more on the ulnar side of the motion, it feels like the downstrokes go up in the air more easily, as do the upstrokes.

If you look at someone like McLaughlin, his pickstrokes start with the arm straight and go ulnar for the downstroke, then come back to straight when the upstroke finishes. That’s more or less what I think the correct rnage of motion for this is.

Try not to set arbitrary limits on when you will / won’t “have” something. Learning to recognize by feel when these two motions are happening, and happening correctly across a wide range of different picking patterns and combinations, is the “long tail” of sklil acquisition. It all gets polished up slowly over time, and you can never tell which phrase is going to work or not work better on any given day. So feeding this with lots of variety is important. Picking technique is already highly repeitive - down and up, down and up. There’s no need to make it more repetitive by drilling the same phrase for long stretches.

Keep in mind that when you play on lower strings, your anchor point — if you are using one — is very often on the body. And this creates a slightly different form than when you are sitting on the bridge or strings.

This has been killing me for a good while now - I can’t seem to reposition at all!

If you look at someone like McLaughlin, his pickstrokes start with the arm straight and go ulnar for the downstroke, then come back to straight when the upstroke finishes. That’s more or less what I think the correct rnage of motion for this is.

Simple in concept, but surprising how difficult it is to change bad habits!!

Thanks to your help I’ve cracked it

I have also made more progress with this this morning than on previous tries.

@Tom_h and @Prlgmnr, would be great to see some clips of yoy guys tackling this, if you’ve got them…

Agreed! Even a before/after video, if at all possible, would be very instructive for the rest of us!

I just left to go on holiday. Will do on Friday when I’m back

Taking a guitar with me of course

In short:
Don‘t mix odd and even number of notes per string.
In Example 1, finger the last 2 notes: D and E on the B string intead of the e string.

Generally (for an entire sequence) there are 2 options: