Hey, to all of you guys out there who are good at the EJ stuff, how do you time those cascades? I know @Troy talks about EJ playing in free time, but how do you apply that when practicing these runs, do you just play them at whatever speed you feel? I have the most trouble with the 5’s, to me they always sound either too much like 16th notes or just too triplety, not the way EJ does it.

I’ll probably get killed for saying this but EJ’s timing on the fives isn’t particularly even. The sweeps are usually a little rushed compared to the other notes. Over time I’ve sort of learned to do it both ways. You can rush the sweeps, or you can use rest strokes and make every note have similar time to where you can’t tell which notes are swept or alternate. I’ve not used a metronome for any of this.

But before you consider any of this, I would back up and just make sure you can play the line fast and smooth with whatever time. Because if you can’t, then that’s the bigger issue. You need a USX motion, it has to be working, and then you have to figure out how to do the DDU picking sequence smoothly and fast. That’s really where you should start here.

I’ll probably get killed for saying this but EJ’s timing on the fives isn’t particularly even.

Truth. Anybody who wants to argue should slow down some audio and hear for themselves.

Funny thing though, is that I prefer the looser, uneven time. It has a defocusing effect, and adds to the flowing quality of his lines. There’s a reason so many people mistake the fives for sixes.

When you address the beat strongly somewhere during the line, we don’t hear it as out of time. This is a common stylistic element among many players. Eric Johnson, Allan Holdsworth, Shawn Lane, EVH and many more.

I wish I had some meaningful advice about learning how to float, how to groove and vary between them. I just didn’t have it until I had it.

Thank you guys both. I’m starting to get the lines up to speed, I think it’s just the timing of the sweep that is confusing me. I usually end up rushing it too much, but if I try to play straight to the beat, it just doesn’t sound quite the same as EJ. I will keep working on it

I had major issues FOREVER with rushing into those sweeps playing EJ 5’s. I thought I was the only one. I’ve never thought about EJ doing that they always sounded smooth and even to me.

Finally after just major repetition they’re becoming a lot smoother and flowing better but yeah I know what you mean it’s almost like a hiccuping kind of sound. I think what you described he’s doing something in between 16th notes and triplets.

When you address the beat strongly somewhere during the line, we don’t hear it as out of time.

I also think this is key, and I’d add Frank Gambale and Yngwie to your list. It’s like having target notes for time!

That’s a very good way of putting it @tommo

There is no “beat” really. It’s just free time, where the sweeps are played a little faster. Half the time you can’t even hear those notes, which is why transcribing his stuff can sometimes be hard if you don’t have video. You can like this or not like this, that’s a matter of taste. But if you like it, you can always rush if you want — just push harder during the sweep so the pick doesn’t stop moving. It’s really that simple.

However as far as technique, what I can say is that learning to do it perfectly evenly is a useful skill for getting good at sweeping. I do it with rest strokes. This example is 190bpm and you can see in the slow motion that there are actually moments where the pick stops almost completely during the sweep. That’s how the timing is maintained even when playing fast: 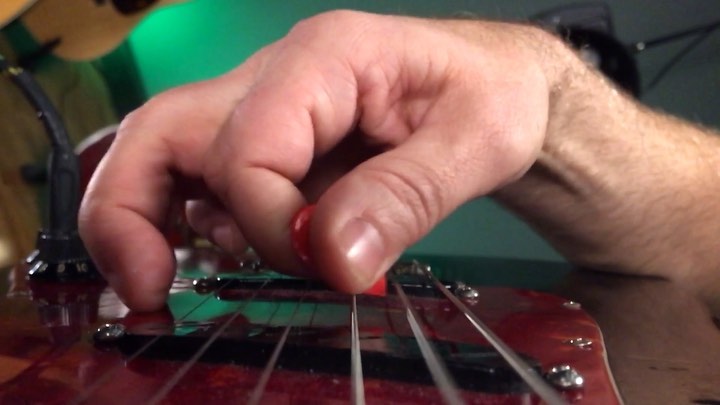 Another example of how well the flexed approach can work with high gain. Not...

DDU is the pattern to start with. Two strings. Any left hand, doesn’t matter. Or no left hand, which is what Teemu Mäntysaari recommends. I’ve never done that but some people like it.

Until you can play it fast, even if it’s sloppy, try not to fuss too much over the timing of it. The big picture matters most, getting the motions to happen. You can always clean up from there.

Thanks, Troy, it’s making a lot more sense now. I’ll practice playing the DDU pattern perfectly even for now like you said. I can get it pretty comfortable around 160-180 bpm, after that gets pretty sloppy. I’m still working on getting it comfortable across the strings and through other pentatonic shapes also.