I am working on re-learning my funk strumming technique after switching to a leading edge grip (from trailing edge).

In the lessons I watch, the muting is done exclusively with the fretting hand, and the strumming hand freely moves without the need to palm mute.

I am having a difficult time with this, as I used to combine both palm muting with fret hand muting.

Does anyone have any tips about how to mute more effectively with the fretting hand?

I just approached it as a hand-sync issue, trying to squeeze the left hand at the exact same time as the strum. The only difference is that the squeeze is directly followed by a release, just enough to deaden the strings.

Once I felt comfortable, I started varying the speed of the release. This gives musical variation in the intensity of muting, and increases control and the ear-hand connection.

Finally, I started to play parts that include both muted and non-muted strums until I could turn the muting on and off without thinking about it.

Thanks, yeah he is one of the people I have been folowing for tutorials. I have to go back to see if he has one talking specifically on left hand muting.

Awesome thanks, that is a good way to look at it. I’ll really need to work on that, since there are so many different chord shapes which all require a different arrangment of fingers that mute each string.

I was mainly addressing the chukka-chukka thing where you play a chord and immediately choke it off by releasing the fretting fingers. I’ll add that the release is just enough to stop the chord from ringing and is invisible. You don’t release enough for your fingers to visibly lift.

But it sounds like maybe you meant muting the notes you’re not playing. Honestly I don’t think about that at all, it just happens automatically. I did work on it for distorted lead playing in the past and I think it just carried over. It’s much easier in this context because the tone I use for that stuff isn’t very dirty.

But I must be doing something because I often I play that stuff with some heavy skank, and and the muted notes add some nice grit. I’ll try to observe myself a bit to see what my hands are doing. I’ll post again if I notice anything that might be helpful.

I’m not Cory Wong, and you have no reason to emulate me. But I do spend the vast majority of my playing time on funk/soul/R&B for the last few years, so I’ve played a lot of this sort of thing.

Here is one of my favorite funk/disco guitarists, Nile Rogers, and it looks to me like both hands mute at various times? If you figure this out, kindly give me a summary of what you think is going on! 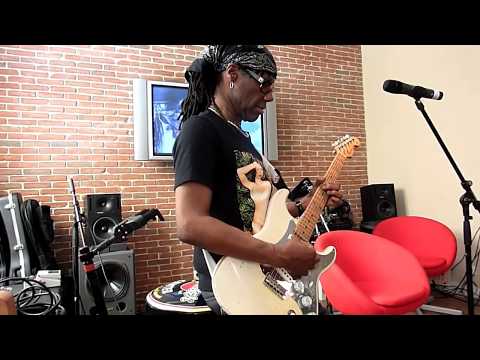 Oh no you had it correct initially - I was referring to “choking” the chords by muting the notes I was playing. I play with pretty low action - I feel like if I had something like a strat with higher action it may be a bit easier to keep things muted nicely. On my current guitar, the difference between fretting a note and muting it is such a fine line.

But I suppose I just need to work at the hand sync stuff you mentioned consistently and it will come along. It will probably be a much slower process for me, as funk is very far from my main/favorite style of playing - just something I would love to have in the toolbox.

This is great, thank you. I had been looking for an example of an established player who uses both right and left hand muting for this style - and you’re right, it looks like he does. This is very close to the way I feel most comfortable playing - maybe I should just stick with that instead of re-learning with the new pick grip.