Help me find the perfect pick?

Let me know what you figure out about Broderick. That guy plays some things that absolutely scare me.

Thanks for the interest in the Pick Clip guys! I saw some mention of being able to use ANY pick, I just want to clarify the Pick Clip will not work with JAZZ III size picks or super thick picks like 2mm+ for example. It works best with traditional tear drop shape picks that are medium-heavy in thickness. Find them here https://guitarpedalshoppe.com/index.php?route=Broderick-Pick-Clip they are available in both right hand and left hand. Cheers!

Ah thanks for clarifying my reaction, all good. I’ve recently moved away from jazz iii so there won’t be any issues on my end.

Will it only not work with Jazz III specifically or any style that imitates Jazz iii such as above link?

It won’t work with ANY Jazz iii size pick due to the fact that the pick is too short to reach the teeth that clamp the pick in place. If you do clamp it in, then the pick won’t be long enough to extend past the pick clip rendering it useless. 2mm will be a tight fit if you can get it in the teeth.

Oh okay, the pick I linked is bigger than a standard Jazz iii so hopefully it will work

Ok sorry I don’t have one of those to try

I use V Picks and have always found them very slippery (despite the claims they stick to your fingers). I just cut and superglue some sandpaper (black) or non-slip bathroom pads (white) to my V Picks. Not pretty, but I have no trouble holding on to them! 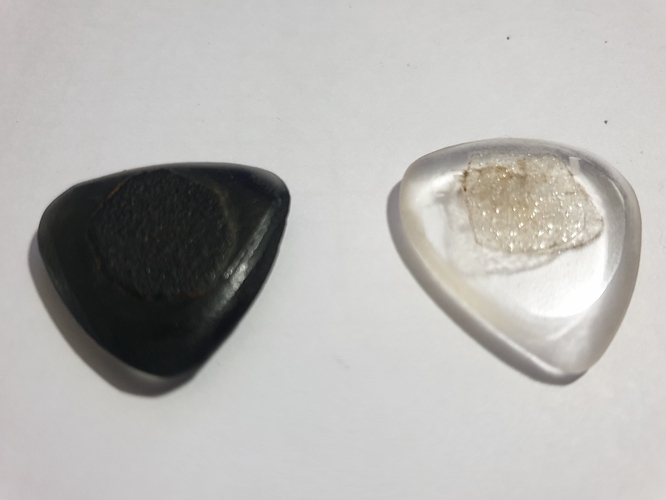 I had a similar situation to you a while back, really liked the jazz 3 shape, hated all the different materials. The best if the bunch was the Petrucci one but hard to hold onto and just a tiny bit small.

I took a chance on the Andy Wood blue chip pick and it’s now the only pick I use. It’s the best thing I’ve bought for years:

The Tortex material is great and completely solved the slipperiness issue for me, however the problem with this pick is that the edge isn’t beveled, which (in my opinion) makes the tone sound much worse on the wound strings. Sometimes I like the scratchy sound caused by the pointy flat edge, but it’s a bit too much. I also find that it just doesn’t feel quite as smooth for some reason.

I think that you’re right and they’re just stamped, but the plastic is very soft and I am told that fingernail sandpaper will clean the edges up pretty quickly, although I haven’t tried it.

the plastic is very soft and I am told that fingernail sandpaper will clean the edges up pretty quickly, although I haven’t tried it.

Did you end up getting the pick clip? I got it and a lot of my favorite picks don’t fit in there. Im not a big fan of it with the picks I have that DO fit, but what I did today was take my favorite 2.0mm pick and duct tape it to the pick clip and so far I like it A LOT more. Gonna keep messing around with it

Hey, thanks for checking in, I meant to reach out and see how you were getting on with yours. But yeah I did get mine! Most of the picks I’ve been playing with lately are just a little over 1.0 mm so the fit was ok. I’m still getting used to it. I definitely like it better than all the other thumb picks I’ve tried.

So far, what I’d hoped for hasn’t happened, and that’s a seamless change from finger picking to to ‘regular’ picking. Gripping the new thumb pick like a regular pick just doesn’t feel the same as holding the pick. I can’t quite pinpoint which angles feel off. It could be that I need a little more point positive?? I think that’s the term. What I mean is I’d like the point of the pick to point more towards my headstock, rather than into the body like it currently is. Also, CtC has gotten me to really loosen up on my grip compared to all the years before. I get much more ‘grip flop’ now. Using the thumb pick, it feels like a tighter grip again so it’s a little weird. But, it’s cool because it feels so drastically different than any other pick I’ve used that it’s a neat little exercise as another variable to use in my motor learning with some of the newer picking motions I’ve been trying.

Either way, I think all this is workable and I just need to mess with it more. I got a really cool thing happening with a trailing edge grip the other day that seemed promising. There are definitely possibilities! I should probably watch some videos of Broderick and see what he does, as a good baseline.

Also, this is pretty funny about the shipping/tracking of the product. The pick clip took forever to get to me lol! It started out in Massachusetts, then went WAY down to Florida, then finally made its way to me in Pennsylvania lol! I always thought the shortest distance between 2 points is a straight line…who knows what’s going on at the USPS though lol

You hit the nail on the head. The angle of the whole contraption isn’t the same as how I normally hold a pick and it doesn’t allow me the same amount of pick hanging from my grip/fingers. However, with the duct tape, I was able to place the pick where ever I want on the clip and so far I like it much better. So my pick because it is 2.0mm isn’t even in the actual “clip” part, it sits right under it now and the tape holds it to the rest of the clip. It feels more like i normally pick now

Huh. Sounds like I need to try duct tape then lol! You know what they say:
“If you find a problem you can’t fix with duct tape…you didn’t use enough duct tape”