Hi guys,
I’m fairly new around here, I’ve been a member for a little over a month. I’ve loved watching all YouTube videos and I’ve finally gotten around to signing up, I already feel like I’ve learned so much!

I’m working more fully integrating two way pick slanting into my playing. I’m a natural USX player so the first step has been trying to work on DSX playing. I’m starting to get to a place where I feel more comfortable with one way DSX playing, and I feel like with a few more months of targeted practice it’ll feel completely comfortable. But two way pick slanting still feels like I’m doing something wrong. I did a video of the different components and then me trying to put things together.

I’m doing 16th not triplets at 110, a comfortable speed for my USX playing. The one way DSX isn’t 100 percent comfortable, but I can do it well enough. I then did a 6 string two way run which feels pretty uncomfortable, but I can get through it. Finally I tried descending sixes which feels very bad. The first attempt was definitely the longest that I can do it, and the subsequent attempts are more typical, I can do a few repetions and then it chokes up. Is there anything wrong with my fundamental technique? Or is it something I just need to work on? And are there any exercises I could use to target two way pick slanting? Thanks!

Thanks for posting! This all looks great. I know the Primer doesn’t fully explain this yet, but we’ve moved away from using the term “two-way pickslanting” to describe alternate picking, especially for styles like yours which are almost entirely wrist. This is because with wrist motion, all the escapes can be achieved from one arm position. Just as an example: 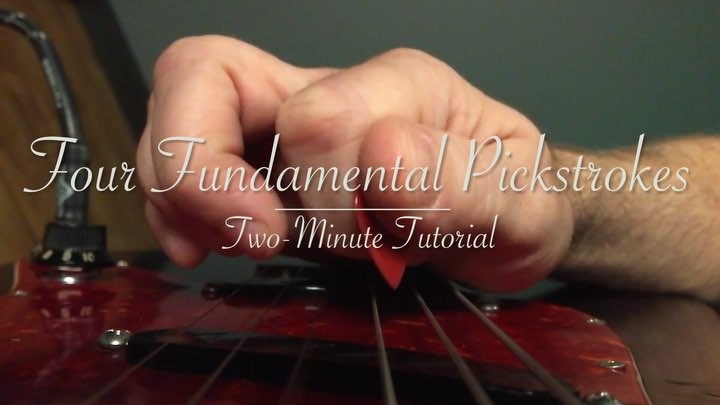 440 Likes, 18 Comments - Cracking the Code (@crackingthecodeguitar) on Instagram: “The more we learn about picking technique, the more we realize some of our original notions were a…”

So the picking motion is changing direction but the arm isn’t. The wrist is just moving in different directions, which it is plenty capable of doing. In fact, you’re already doing it. If you watch your descending sixes attempt around 35 seconds in slow motion, you’ll see that the first two notes are USX, then the third note is actually DSX. Yes, you’re rotating the arm a little. But you’re not rotating it all the way over into pronation, you’re just making it a little less supinated. If that’s all you were doing, the pick would not get over the string. The fact that the pick does get over the string is how we know you are also changing the wrist motion at the same time. i.e. That third note has more extension in it, the “2 o’clock” motion we talk about in the Primer. Your USX motion is the “9 o’clock” motion from the Primer, closer to pure deviation.

Mixing and matching different wrist motions to achieve the different escapes is the core of how wrist technique works. This is why you don’t see Paul Gilbert’s forearm moving around much when he plays a scale. In your case what this means is that you can just use the lightly supinated arm position for everything. Over time you’ll learn to differentiate by feel when you’re changing the wrist motion to facilitiate the different escapes.

You don’t have to worry about eliminating all arm motion. There may always be little bits of it. And when I’m playing a simple pattern-based phrase that is entirely one escape, I might very well use a form which is more supinated (or less) as the phrase requires — especially if sweeping is involved. But when I’m playing a pure alternate line that mixes escapes inside the same line, like a scale, I’m probably just using the one arm position that works for all of them and moving the arm very little, especially during outside picking.

So nice work here, everything seems to be working. Just worry less about switching up your arm position and more about trying to feel the difference in these two motions from one centralized place.