I can play fairly fast and accurately on a single string. Now what?

So I’ve gotten elbow motion using DSX on a single string to about 180 BPM. This is faster than I’ve ever been able to play in all 14 years of playing. My tremolo picking was never even that fast and now, when I totally exclude the fretting hand and just hammer out one note, I can go even faster. The problem is switching strings now. Every time I go to switch strings, my playing slows down, my arm gets “twitchy,” and I’d say at least half the time, if not more, it’s not a clean string change. I know the obvious answer is practice string changes, but I don’t even know where to start with all the different motions, exercises, songs, whatever. It’s all so overwhelming and I guess I sort of just need a starting point or a game plan of sorts.

I made some comments in a couple of recent feedback threads that might be helpful to you. Rather than retype or copy/paste, I’ll link to those comments. You might also find it helpful to read those threads in full. If you have followup questions, feel free to post them here in your thread.

JustDave70 technique critique - speed, grip, and what motion to work on? Technique Critique

Firstly, sorry if my previous reply confused you more. The key starting point is finding a motion that you can do fast and smooth on a single note. That provides a point of reference for what “fast and smooth” should feel like. As you incrementally attempt more complex things, you can test whether they still feel as “fast and smooth” as that fundamental baseline. For synchronizing with the fretting hand, you’ll probably need to do some slower work while the fretting hand learns what it needs t…

Help me, I just can't do it Technique Critique

What happens when you try to use this motion to do tremolo on one string for 16 or 32 notes, then switch to another string for 16 or 32 notes? I’d take the motion that feels fast and smooth, and attempt that sort of switching with it. If you aren’t able to do that, try the following: Synch up your single string tremolo to a metronome Make a note of the tempo Attempt the switching as described above, at least 6 notes on a string before you try to switch, but more should be easier, up to say 24…

Start with 3 notes per string - ascending and descending. Break it down to one string change if you need to. It’s a good starting point a fast run.

Pretty late response from me, but I really appreciate the replies guys. Thanks a bunch! I’ll work on those things right away.

The next step from playing a single note on a string is actually playing synchronized left-right hand stuff on one string. Simple repeating patterns like the Yngwie six-note pattern are good for that. Can you already do that at 180 too, where it’s nice and locked up and the picking / fretting don’t drift, and the attack sounds good, and so on? If so, awesome.

Every time I go to switch strings, my playing slows down, my arm gets “twitchy,”

Don’t do that. Just keep doing the motion you’re doing. There is no reason to change it.

Elbow motion is usually downstroke escape motion. Meaning, the last note on the string needs to be a downstroke in order to move to a new string cleanly. As long as you do that, there is no need for the motion to change. The downstroke goes over the next string automatically because the motion is angled. Here’s what it looks like if you were to play four notes on a string using elbow motion:

Now without video I can’t say for sure that your motion is DSX. There are other motion variants that involve other joints that create a USX motion. If you want to post up a clip we’d be happy to take a look just to confirm you are doing DSX.

If that’s the case, then you need to work on a phrase where the last note on every string is always a downstroke. Here’s the simplest one I can think of: 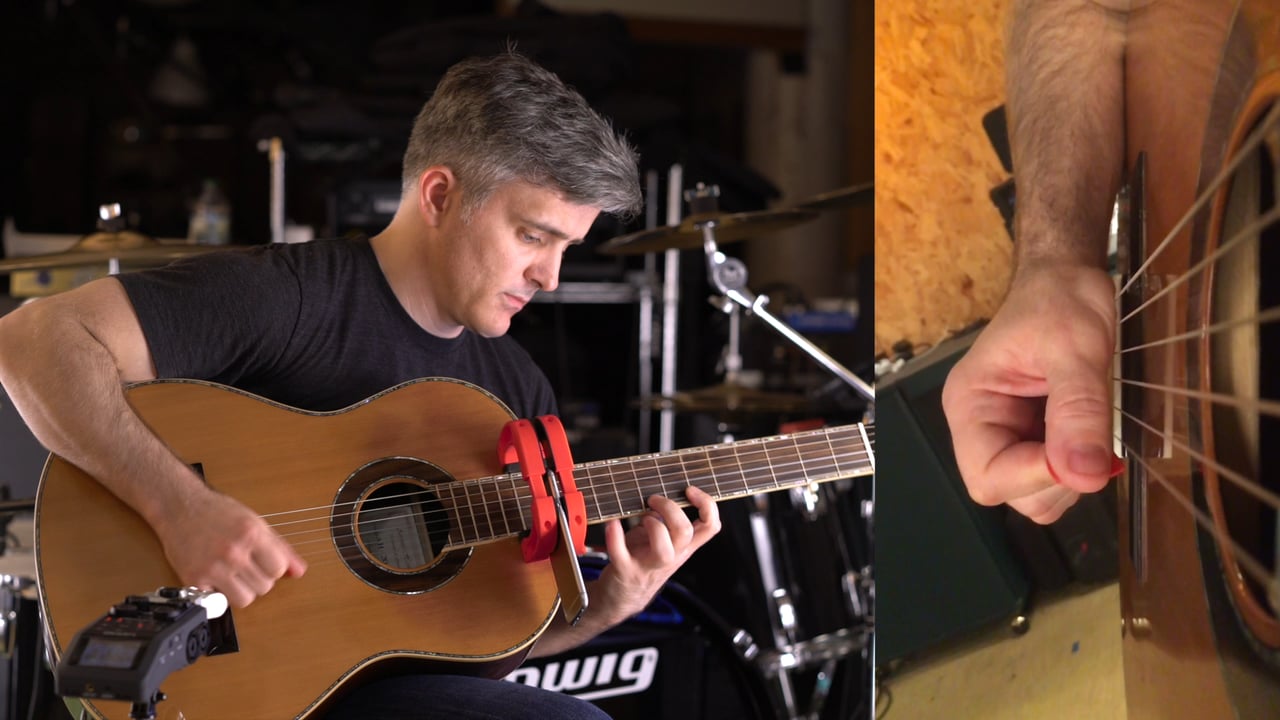 When you do this, you need to NOT change your motion when you move to a new string. If you do, it is intentional, and all in your mind. You don’t want to put hours and hours of practice into the “twitchy” motion you describe. It must be the smooth fast motion that can do the 180.

Think of it like a fun game. You don’t need to do all six strings. You can do three strings, from D to B. Whatever is easiest. Now you try to play that sequence while maintaining the smooth motion. Did you do it? No? Try again. Still twitchy? Player One loses. Stop, put the guitar down, get a drink, come back in a minute. Put in another quarter and try again.

Think of this like riding a bike, or standing up on a surf board. Your goal is to maintain the motion across even one string change without changing it. Don’t let your brain get in the way of this. Just cave man it and don’t worry if it’s clean.

You have the motion, and it’s working. Now you just have to learn how to use it.

The next step from playing a single note on a string is actually playing synchronized left-right hand stuff on one string. Simple repeating patterns like the Yngwie six-note pattern are good for that. Can you already do that at 180 too

LOL, yes that would indeed be extremely fast.
I bet even Troy can’t do that, maybe @milehighshred.
The pattern consists of six notes, but you’re supposed to still play four notes per beat. So the first note falls on the beat every second repetition. You can as well play 6 notes per beat at 120bpm, both are 12 notes per second. I’d recommend bursts of 1-2 repetitions and then increase that by 2 notes gradually as you feel comfortable.

Sorry! Not what I meant. I just reference everything in sixteenth notes for simplicity. Just replace 180 with “the picking speed you mentioned earlier”.

The meter doesn’t actually matter. Nor does the specific speed, really. The first step with all this motor learning stuff is simply developing a motion that is smooth, past the point where you could use an inefficient motion. So somewhere north of 140bpm or 150bpm sixteenth notes most likely. Again, the actual number doesn’t really matter so long as it is beyond the point where you could do something like stringhopping that wasn’t actually smooth.