In praise of the rest stroke

I feel ashamed for my former confusion about the mighty rest stroke, so I had to come clean.

I agree. I am a recent convert to the power of the rest stroke.

Agreed. Strangely, I’ve always used them, but on upstrokes. I am classically trained and in that paradigm we use rest strokes extensively, for tone advantages and accents. Since we have more fingers than thumbs, the rest strokes occur in the upwards direction much more often than the thumb’s downward rest strokes.

Somehow this transferred to my electric playing and may have something to do with me developing an upwards pick slant. The trouble is, I had no idea I was using a slant at all and didn’t capitalize on the ‘escaped’ pick strokes and subsequently never organized my phrases accordingly. This led to lots of inconsistency in my attempts at high speed electric guitar playing.

Cracking the code was eye opening for me, so I’m currently trying to re-engineer my technique. Pretty tough since I’ve been doing it what I now consider ‘wrong’ (i.e. making things too difficult) for over 15 years! I’m trying out the EJ style downwards pick slant, and making my downstrokes bury into the strings as rest strokes is a helpful guide indeed, just as Troy preaches. It’s feeling pretty natural already and I’m looking forward to what’s coming as it feels like ‘home’ for me.

To wrap this reply up (rest strokes, my classical background) @Troy is there ever a chance you’ll diagnose some monster classical player’s technique? I’d LOVE to learn what I’ve been doing wrong in my classical playing all these years. Even though I had training, you seem to be able to pinpoint technique like no one I’ve ever seen. It would be eye opening to see you crack the classical code.

Thanks again for such a fantastic product. I just got my full membership a few days ago. I’ve been watching your youtube videos for years and thought it’s high time I give you the support you deserve.

and making my downstrokes bury into the strings as rest strokes is a helpful guide indeed, just as Troy preaches.

I can’t take credit for the rest stroke observation. That was @Kean who pointed that out, after watching footage we filmed in our lessons. I was doing it, and I knew I was doing it, but I didn’t get the significance of it as a tool for teaching motions. That’s all Kean.

This is a group effort here, folks!

is there ever a chance you’ll diagnose some monster classical player’s technique?

I know Andrew Leonard from school:

Andrew was actually my advisor for the paper I wrote on downward pickslanting that was essentially the first Cracking the Code type thing I did. So he knows exactly what we do here. We keep making plans for him to come in and then we get swamped and sidetracked. So it’s entirely our fault! But we’ll get him here eventually. In the mean time I believe he has a TrueFire course and also teaches privately for those who are interested.

Very cool, thanks Troy! Keep up the great work. What you and the team are doing is absolutely awesome. If I would have known about all these little secrets 15 years ago, who knows…maybe I’d be getting interviewed by you instead of building websites

lol! I guess things work out the way they are supposed to. I’m happy just doing this as a hobby and really excited I’m on my way to effortlessly play all the stuff I used to almost be able to play (while gritting my teeth and holding on for dear life as I muscled through all the string hops I was doing haha)

Thanks again! I’ll spread the word about your products.

One of my go-to advice for folks and a few gifted students is “a chord is technically the fastest thing you can play and the sweep is just one level slower because you are basically breaking it up with rest strokes. So you don’t have to work as hard and therefore you don’t actually have to be scared of it and in a way, it’s easier.”

Half facetious but I’m not really sure where the joke ends. It’s equally applicable to two string sweeps and economy picking. Early on, when I figured this out, I basically ignored all efforts to go and beyond muting strings in all kinds of fashion. A well timed rest stroke was more than plenty and the motion itself was plenty rhythmical that I needed not worry so much about timing.

Probably overly contrarian but hey, what’s learning without a bit of counter-intuitive thinking.

Exactly what are “rest strokes”? Thanks

Apoyando is a method of plucking used in both classical guitar and flamenco guitar known in English as ‘rest stroke’ (though the direct translation of ‘apoyando’ would be “supporting”). Rest stroke gets its name because after plucking the string, the finger rests on the adjacent string after it follows through, giving a slightly rounder, often punchier sound (contrasted with tirando).

In the context of economy picking, let’s say DDuD in 2 nps groups, after the first downstroke, almost instantaneously the pick rests on the next string, raring to go. It has important implications in tone, rhythm, and muting. In fact, it won’t be quite a stretch to say the well executed rest stroke (in this context) is indicative of good command of the particular pick technique.

This improves the tone as well, giving a fullness. It is very evident on a classical guitar but I can tell it’s there on an electric also. Probably one of the many reasons Eric Johnson has such a rich tone. I never realized he did so much of this until seeing the cracking the code videos and became aware of pick slanting in general.

Another semi-related thing I’ll note - this sort of a fast, repeated blues lick that Jimi does a ton (think “Red House”):

I’ve historically always tried to alternate pick, and it’s never sounded or felt very fluid or in the pocket to me (though, my default picking motion has a little bit of an arc to it, which is probably a byproduct of stuff like this).

However, a while ago someone sent me some really good live concert video of Jimi, and there’s a few great close-up shots, including one where he’s playing this lick. And, it’s abundantly clear that he’s NOT playing it as an alternate picked lick, but rather ascending with downstrokes, aka sweeping. I suspect this is a big part of how he gets such a loose, fluid sound on this run.

So, I’ve been trying to break the habit of alternate picking it and sweeping it instead… And I’ve found it gets a LOT easier to do, and hold a “groove” to the playing while still maintaining a loose feel, if you use rest strokes rather than a single unbroken picking motion to play those downstrokes. Maybe it helps you break up the run into more “defined” notes and makes it easier to stay in the pocket, maybe it’s something different about how the notes ring out, I’m not exactly sure, but it was something that was immediately clear to me as I started experimenting, so I thought I’d pass it along.

That’s such a classic that its numerous variations are licks in themselves almost.

I almost always never pick the “bend” but hammer on and then sound the bend. For example, I would downstroke the C on the G string (making a rest stroke on the E on the B string, while the hammer-bend is being played), and the bend functions a time signal- when it hits the target note then I finish the down-down stroke (made possible by the rest-stroke), upstroke the A on the E string, then I am free to start descending via downstroke.

Not that you absolutely must hammer the bend for this to happen, as in most tempos this lick is played you can have two consecutive downstrokes (or a down-up) on the same G string without too much fuss, but like you I like the fluidity of this particular lick when done right, and despite how cliche it is, you can augment it pre lick and post lick that it becomes all open to interpretation.

I’d be curious to see close up footage of this, at tempo and slowed down, since I’m having a hard time picturing what you’re describing. I’d imagine it would have a very different sound - Jimi (and SRV) tend to get a really ferocious sound out of fast repeated versions of this, and I think a lot of that is likely from really digging in on that G string bend.

It’s such a classic blues run these days though, precicely because with practice you can cycle it VERY fast, and add in a lot of variations to give it some real movement.

Right now I’m doing an EJ-hendrix interpretation of Spanish Castle Magic (such a great song) and that lick is basically a poster boy for this song.

Good attemps from all of you to praise the rest stroke…

…but no one will ever love it more than Tommo!!!

Lol! Maybe in time I’ll love it as much as you @tommo haha!

Since I’m in the process of revamping my technique using alot of UWPS, I’m really relying on downward rest strokes. Almost like training wheels…except I probably shouldn’t think of them that way. I notice in a lot of the videos of @Troy playing, even at his top speeds his down strokes often bury into the next string. I think it’s awesome and probably part of his aggressive tone so I’m not shying away from it. The one thing I’m having problems with is that it feels weird to me when I get to my high E string, because there’s nothing to ‘rest’ on. Does anyone else experience this? @kgk you started this thread with mention of rest strokes keeping you on track. Do you ever feel like you wish there was something to lay into when you get to the high E? If so, how have you been compensating? Just curious!

If so, how have you been compensating?

I also find it a bit uncomfortable when I get to the high E with “DWPS”. Whenever possible I try one of these: 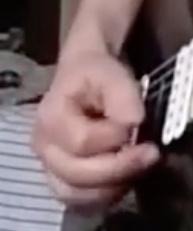 EDIT: if you allow me a bit of shameless self-promotion, the below video at 3:15 is a real-life example of me using rest-downstrokes on the middle strings (with DWPS), and then switching to rest-upstrokes when the same riff is repeated on the two high strings (with UWPS):

if you allow me a bit of shameless self-promotion

Heck yeah! Great playing! Thanks for the video.

Thanks for the tips too, makes sense and I’ll give it a try.

Hi.
I’m a DSX player, and I just tried playing using rest strokes more consciously. I found that it helped my timing and the tone is better too.

Are these the primary advantages of rest strokes? Is there a thread that exists that can tell me more about rest strokes? It just feels better to play this way but I want to know why and what other ppl have to say!!