Howdy:
I have trouble playing the four notes in the pic below. Is there any better picking direction to choose? I play downward pick slanting and pretty sure that I’m making the string hopping by the time I play those four notes. Even though I understand how to fix the string hopping problem on one string, sometimes this problem still occurs when I play multi strings.

Have a good day
Dacheng Jiang

Picking styles are like languages — you cannot say every phrase in every language. In the “USX” picking style, this type of picking sequence is not possible when picking every note, because the only types of string changes that are possible are upstroke string changes: 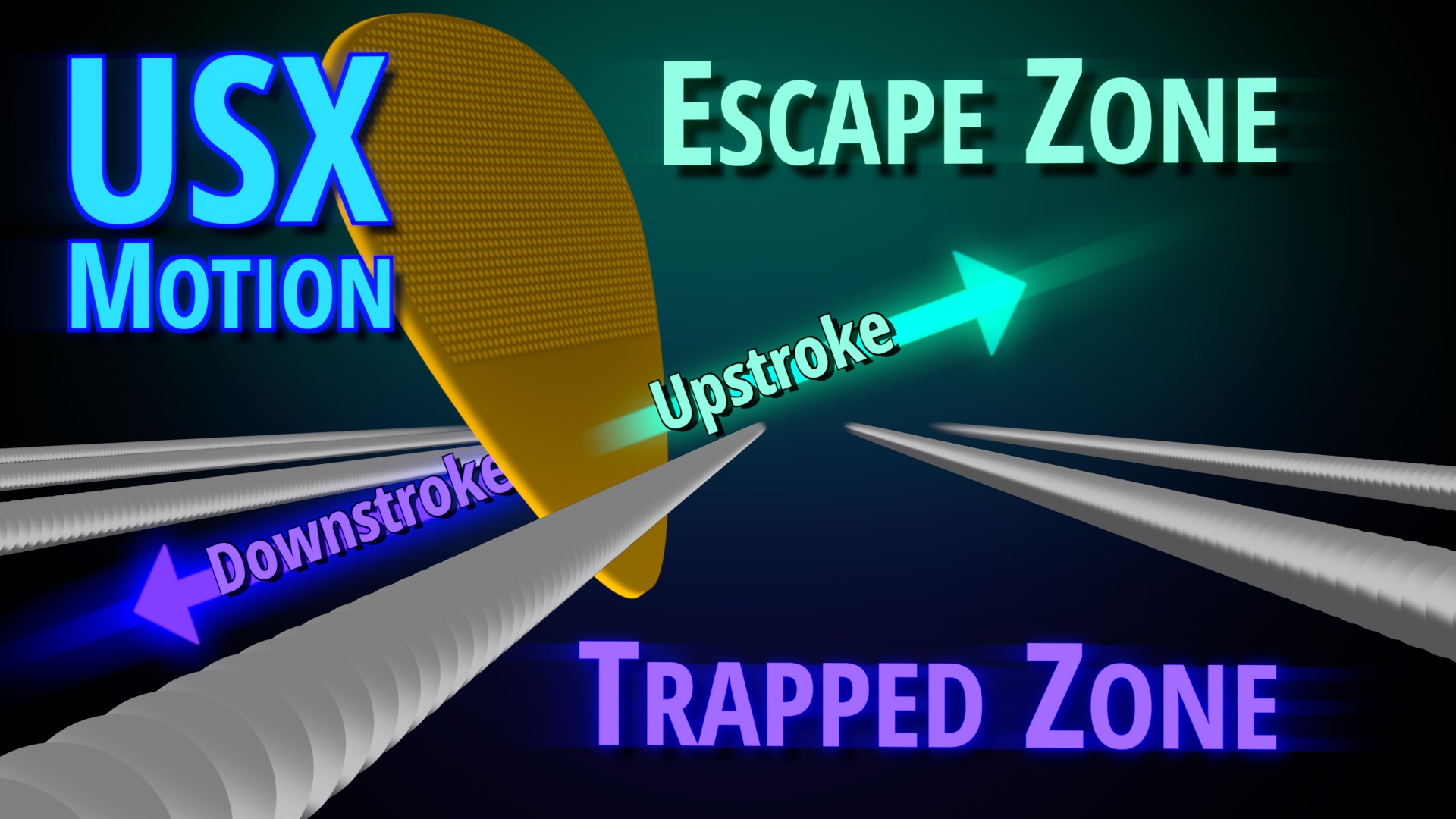 In an upstroke escape or USX picking motion, upstrokes break the plane of the strings and escape, while downstrokes remain trapped. This produces a picking motion which doesn’t actually move side to side at all, but instead traces a diagonal path...

To play a phrase like this, a true USX player would probably use some combination of sweeping, pulloffs, unassisted hammer-ons, or hybrid picking.

However, before you make any changes to what you are doing, you should verify which picking style you are using. Lots of players tell us what they are doing, but when we view their videos, they are not always correct.

To determine your picking style, do not look at the “slant” of the pick. Look at the path of the picking motion. For USX, it must be diagonal, like this:

The best test is a tremolo on a single note. If you can do a fast tremolo, and the motion is diagonal, where the upstrokes are escaping, then you are a USX player. If it does not look like this, then it is not USX.

That’s what I was going to say

Assuming that @Dacheng is indeed using USX (which is to be verified as you say), after the hammer on at the end of bar 2 I’d do down-pluck-down-pluck for the first 4 notes of bar 3, then the remaining 5 notes would be played as

where pluck = middle or ring finger

If you really are making a USX motion, then you can only make upstroke string changes. To make any other type of string change, you would have to change the motion to something else.

I think it needs at least some alternate picking inside or out to keep it even.

Opposite? That is the exact notated picking pattern.

V is down right? and the “n” I don’t have on my keyboard, Thats up?

Am I acually wrong in that? I don’t read tab often

V is up the thing that looks like a 2 legged stool is down.

Not sure if this is true but someone told me it has to do with the areas of a violin bow. The V looks like the top of the bow, the blocky 2 legged stool looks like the bottom of the bow. So up bow, down bow. Sounds believable and after all we (guitarists) did borrow those symbols from violinists.

Edit: I totally understand the confusion since V looks a lot like an arrow point down…

lol oh man, well. I think the inside picking works well. The outside is akward to me as you’re throwing your hand around more. Learn something new every day right

When you describe swiping this way, does that essentially mean you’d pick the first note and sort of glide over the G string (muted), then upstroke on the G string? I’m wondering if I’m misconstruing the concept of swiping or not.

Yes. That’s how I’d handle that string change as I’m primary USX and to me, it feels like the easiest way.

So I’m assuming you’d mute the G string with the flesh of your left-hand index? I think I actually swipe quite a bit without really thinking about it, just essentially trying to force the pick to do what I want.

Yes, usually the left hand index finger will be in a position to mute the strings higher in pitch.

Cool, just checking to make sure there wasn’t some technique I was unaware of or some new discovery Troy made lol