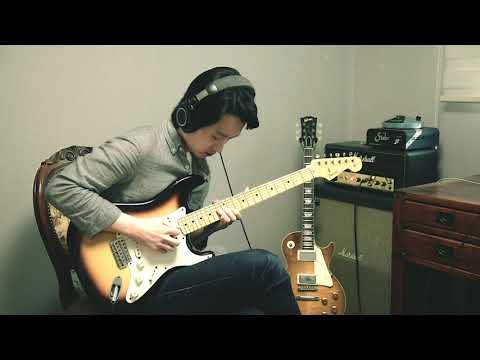 Hope you guys are all well. The time has come to start writing again so the tributes will have to take a back seat indefinitely. I think it’s fair to say there has been nothing better besides EJ to keep me company during the long hiatus. I have learned a lot and it was a very necessary period in my life even if I was scared to walk away from it the first time.

This was fantastic! You are becoming too powerful

At first I didn’t even realize that you essentially have no backing track, it’s just you and the drums!!

Hope you’ll still let us hear some of your stuff also in this new phase! Good luck with the new chapter!

Have a long standing question regarding EJ’s pentatonic runs: does he (do you

) usually pick the descending lines and instead hammer-on the ascending stuff?

Brilliant as always! You continue to amaze and inspire.

Thanks Tommo, and I will try to share as always.

As for your question, I just realize it’s something I never really addressed and you had asked me this before, so apologies!

The descending part has really one skeleton (the down down up atom), but my variations employ skipping two strings, repeating 3s & 4s, and sometimes veering into other boxes up or down. The important thing is the mechanical skeleton stays the same so most of the variation is in the note choice actually (and really heavily relies on what rhythm part or phrase I am going to play next- since the pentatonic run itself isn’t the song).

The ascending part is more varied in the sense that I don’t stick to a strict mechanic like I do descending, so sometimes I do consecutive upstrokes with ring finger hammer ons to quickly sweep up the scale (or line), or even employ the same technical tools as I did in descending (but in reverse). I feel more free to experiment with mechanics and more importantly, note choice and rhythm when I do ascending stuff compared to descending. However I feel more technically solid with the latter.

None of these distinctions were planned in advance, but it is perhaps a result of unbalanced technique, my stubbornness (to a large extent), and just happenstance. I also feel that I make less of a distinction between the two than I used to, but go more on feel and the mood of the song.

I always look forward to your EJ covers! Do you take requests? lol! I’d love to see what you do with Trademark. The solo near the end has been a lifelong bucket list item of mine. I just can’t play it at speed. I’ve worked out 2 or 3 possibilities for the fingerings that conform to the USX ‘rules’, I just can’t keep the speed up. I’m not sure if I’m just playing it a way that makes it too hard or what. I’ve checked various live videos to see what he does and just my luck, he always takes the easy way out on that part and doesn’t shred it like he did on the recording haha!

Ha I just realized how badly I skim-read things on here. I saw your thread and my eyes were drawn to “Eric Johnson Cover”…for some reason I read the first word as Latest and not Last lol! I didn’t even read anything else you wrote, I just hit play on the video. I’ll officially withdraw my request for Trademark

I’ve really enjoyed your covers and I’ll look forward to your originals.

Very good indeed as always! Looking forward to see what you do next.