I took a few months of classical guitar lessons, and I quickly discovered I absolutely hate my nails , so, for now, I’ve stopped - while I can technically play some fun stuff, I dislike the tone my nails produce. I still want to imitate that sound, though.

This, I believe, leaves me with two options - fingerstyle electric, and hybrid.

I’ve been collecting videos and lessons for a while, so I have a few on hybrid - most notably Rick Graham’s hybrid workout. Problem is, most of these focus on using just the middle (and at best ring) to facilitate shreddy-type string change stuff that would otherwise be two-way escaped, like Rick Graham and Marshall Harrison’s style.

I, on the other hand, want to get closer to stuff like Opeth’s Patterns in the Ivy 1, the intro to Nevermore’s The River Dragon Has Come, and in general, classical-style sort of polyphonic playing, but maybe with some ambient delay/reverb stuff.

Is it even worth taking my Giuliani etudes and doing them hybrid-style (pick, middle, ring, pinky) instead of the traditional PIMA?

I know Index + Middle are the most independent fingers, so classical focuses rather hard on IM and IA alternating patterns, and Middle + Ring would probably never get me to the same speed, let alone adding the pinky.

I’ve been goofing around, and I can sort of see the potential of pick + middle + ring, but I’m unclear if it offers any actual advantages over just two-way escape or even economy picking arpeggiated triads. It produces a different sound, sure, and I can sort of do harmonic intervals with two-string skip inbetween.

Compared to fingerstyle classical, and having the thumb play the lowest strings and index middle ring on the highest, I don’t know if it even makes sense to practice this.

Anyone have any experience with this use of hybrid picking?

I tried various hybrid approaches for classical (mostly on “easy” pieces like Romance de Amor), including pick + middle, ring, pinky. Unfortunately, as we can probably expect, I found it really difficult to use ring and pinky well. Some things are possible, but others feel pretty unattainable even if I hammered at them for hours / years.

but with pick + MA a lot is possible. Danny Gatton was a master of this, so it’s worth checking out his approaches and see if they are any help in the classical pieces you are working on

PS: and of course I can’t resist shamelessly advertising my Down - middle -down - up approach for classical tremolo, although I suspect you may have seen it already! I can’t do this as fast as I’d like to, but at least I can finally approach a style I wanted to play for years:

Little addition: actually the pinky in itself was not the source of the problem (apart from the fact that it’s a bit short).

My issues with pick + fingers 2,3,4 were always related to having to use 3 and 4 independently. Plucking a double stop with 3+4 feels totally fine, as they basically lock into one mega-finger. Doing 2-3 or 2-4 combinations also seemed fine for the most part. The problem always arose when the 3-4 combination was used repeatedly.

Hey Tommo - yeah, your adaptation of the classical tremolo was what got me thinking that maybe I can finnagle this whole hybrid picking into getting me the sound I want.

I’ve tried doing pick + 2,3 and I can get it working for 4-string chord arpeggiations, going pick D string ; pick G string; middle B string; ring E string, but adding the pinky makes it a total mess, mostly because I’ve never used it for plucking at all.

I’ll check out the Danny Gatton video over the weekend, see what I can nick from it.

I think maybe working on Pick + 2,3, adding your variation of classical tremolo, and Ichika Nito-like instagram-style tapping with the free fingers may have potential.

I’ve tried doing pick + 2,3 and I can get it working for 4-string chord arpeggiations, going pick D string ; pick G string; middle B string; ring E string, but adding the pinky makes it a total mess, mostly because I’ve never used it for plucking at all.

Yeah, most traditionalists avoid the pinky, for all the reasons you and @tommo are discussing. The independence is a huge issue (if you need to play fast) and it’ shortness makes it tough to reach things without compromising the right hand form that’s typically used. That said, I’ve heard of small subset of traditionalists who have made use of it. Still, I’d go with your approach of just pick m and a. The only place I could see you running into issues is if you were doing fast arpeggios that are approximating a rolling sextuplet that in traditional classical would be played p i m a m i; p i m a m i etc. If the i, m and a fingers are always playing on the three treble strings and the thumb picks any of the bass strings you’d probably have some challenges. Since your pick (plectrum) stroke would take the place of both p and i, you’d have some nasty string skipping. You’d end up in a world where you’d have to do some brief DBX combined with hybrid.

But maybe you wouldn’t even encounter this, as you mention here:

I think that’s largely true. But, there are enough pieces in the repertoire that do require it. It’s almost always going to be on those rolling arpeggios I outlined above. For example the passage here: 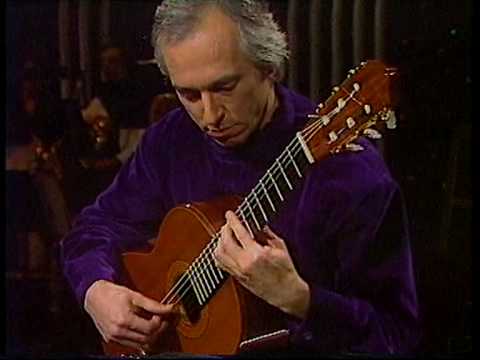 Particularly when the speed really kicks in around 2:30…Granted that’s different than the example I mentioned because it looks like the only bass notes played are always on the D string. But there is definitely stuff in the repertoire where the right hand pattern is identical to this but all three bass notes get used while i m and a just hang out on the treble strings the entire time.

I guess if you don’t want to play stuff that requires it, who cares, right?

TL;DR
I think if you’re just trying to add some classical flavor to electric, pick + m and a will cover you nearly 100%.

P.S. @tommo, you monster, you! You’ve inspired me. Don’t do that!!! I need to be working on my DSX right now and I’ll never make progress there if I’m distracted by playing a classical tremolo on the electric lol! Seriously though, that sounds really really good. Did you have any nails on your right hand when you played that? The tone is nice and even between the pick and fingers and that’s tough to do.

Lol I wish this was the case, but many years practicing Villa Lobos etude 1 tells me otherwise

I actually think it would be a good piece to play with hybrid picking, either Pick + M A or Pick + M A C (hard!!!)

EDIT: I noticed that “move the middle finger out of the hand” is a bit unclear. What I mean by that is, that some people might need to create a little gap between their index and the middle finger to accomodate the distance between the picked string and the plucked string in this particular arpeggio. This is usually done by a mixture of abduction and extension.
Abduction and Adduction (the little muscles you’d use to imitate a scissor with your fingers) are in my opinion the two things that are to be avoided the most when finger or hybrid-picking. They almost always introduce tension, and therefore limit the mobility of the fingers.

I’m interested in hybrid picking (using a pick & middle fingers) from “chicken picking” country styles. But after seeing Tom Quayle’s techniques on YouTube, as applied to a more fusion legato style, I’m VERY interested. I have a feeling this is a technique which developed more in the UK.
The video I saw used a “hybrid” style only sparingly. It was mainly legato, with picking, and the occasional “hybrid” middle finger used to leap to a higher string and change direction.

To me, Gambale’s speed-picking sounds too unarticulated, and the all-picking styles of heavy metal players sound too “stiff” and overly-sharp.
To me the ideal is the legato style of Alan Holdsworth; it’s articulated, yet super-smooth.
Any links, info, or advice would be greatly appreciated.