New David Grier interview is up! 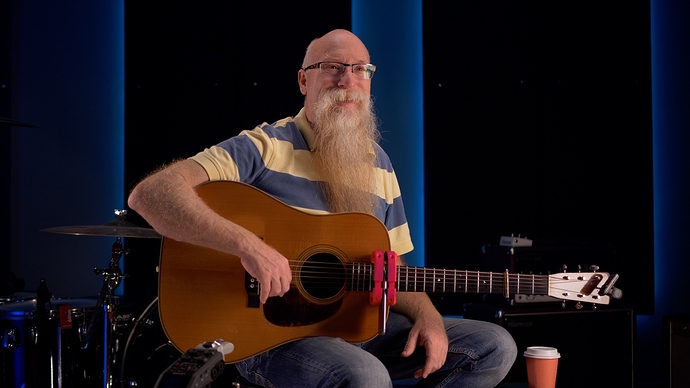 Songwriting and Speed With David Grier

The amazing David Grier returned to Cracking the Code last year for a second meeting, and that interview is finally live on the platform. At just over an hour, it contains 31 musical examples, including a handful of David’s trademark beautiful...

New David Grier is up! So is a good 10+ minute chunk of it on YouTube:

What we learned on the mechanics side from this one is really interesting. No doubt astute observers will have spotted how David’s technique changes when he kicks in to high gear. He introduces both a DSX and a USX mode, by way of slight changes in forearm position, and changes in wrist motion to accompany. DSX and the accompanying upward pickslant is clearly the primary.

This is a textbook example of the “primary pickslant” concept we introduced in Antigravity, although I think it’s now clearer to refer to this a primary pickstroke type, in this case, primary DSX. And that’s just because, as we’ve seen with players like Andy Wood, the pickslant itself can look like all kinds of things, or nothing. But the motion type is a much clearer way of seeing what they’re actually doing, and understanding why they lines they play work the way they do.

You’ll see the USX form emerge on the higher strings in the head to the 295bpm take of Wheel Hoss, where he plays that whole part of the phrase in USX. And of course you’ll also see the Batio-style intermittent swtich between the two forms which generates, essentially, a double escape motion in the process. So there is still double escape motion happening at these higher speeds, and there are definiutely still wrist-only double escape motions happening at these speeds to, as you’ll see every time he does an upstroke string change. So it’s not all single-escape wrist, but rather and Andy Wood style mixture of single and double escape, with a mix of forearm and wrist for those double escape. That’s the most accurate and clearest way to describe what he’s doing.

In this higher gear he’s still unmistakeably David in sound, even as “streamlines”, in his terms his signature arrangements.

Anyone else having repeated stalling/buffering issues with this?

Just watched it and have to say what a warm and generous man David Grier is. Lovely stories about his guitar education and how he refined his technique.
I wont even come close to being as good as him, but it is certainly inspiring to watch

Sorry for the hassle. I have seen some buffering in the past at various times when at home with the Vimeo player. I don’t tend to see it in the office. I’m at home now (like the rest of the world) and I’m not seeing any buffering. Again, I think this just has to do with Vimeo’s servers and capabilities, however that works. If there’s anything we can do, we’d do it.

Were you able to get through it?

The vibe in this was one was definitely friendly and relaxed, and I’m glad that seemed to come across!

Were you able to get through it?

I got just over half way through and decided to have another try today, went and got the guitar and had a go at Waiting on Daddy’s Money instead.

The first bar I’m ok with…

I think of all the Code stuff David is among the most musical and the hardest playing style for me to get a handle on* - it’s like there’s a trio in him all playing at once and each part of the trio has an independent sense of time.

*I don’t mean I can play everything on here, it’s just that there’s parts with DG that I can’t even play even at continental drift sort of speeds because I just can’t get the feel of it into my brain/hands

edit: There’s no mystery to it, I just haven’t listened to nearly enough bluegrass.

Hey @Prlgmnr, what about the buffering issues? Are they better/worse on different attempts?

I’m in the same boat regarding bluegrass, and probably in an even smaller boat (is that a thing?

) when we look at all the other interview material

Seems to be working fine this morning.

I got just over half way through and decided to have another try today, went and got the guitar and had a go at Waiting on Daddy’s Money instead.

Ha, as @Tommo guessed I was really just asking about the streaming speeds!

The polyphony thing that David does is definitely cool, where he’ll hammer onto one string while picking a different one. But you can definitely streamline and just avoid those, and play the more linear or patterny stuff that is less alien.

My gateway to this type of playing was just roll type patterns. If you can do those smoothly in the 120bpm+ range, even while doing nothing more than just holding down a simple C chord and applying various 3- and 4-string patterns to it, I think that leads pretty naturally to eventually playing the more flowery crosspicked stuff that David does.

Over time I noticed that as I did this, I was semi-consciously making up little variations that made things more melodic, like these little syncopated bassline type patterns that i’m doing here on the D string:

Just suggestions. I’m still sort of finding my way with bluegrass as a style and I’ll probably never be a bluegrass player in any real sense, but I’m strating to see what kind of paths a person might take to get there.