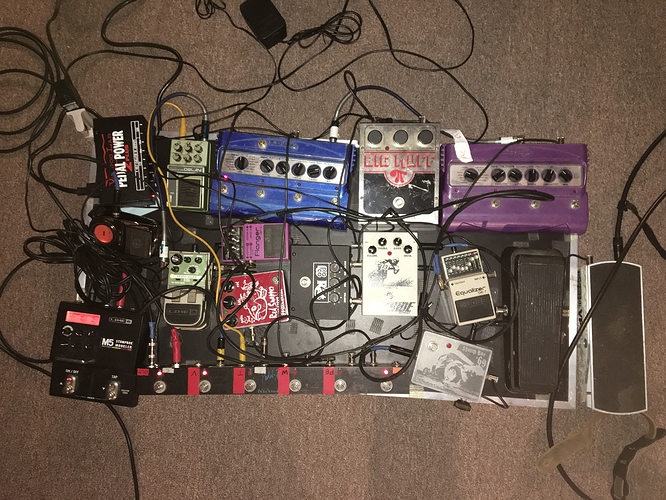 Redoing the old pedalboard – I’m still settling on the setup (for now), so I haven’t got the Dual-Lock out yet.

No buffer – I just can’t do it. I’m keeping the true bypass chain going (unless certain loops are kicked in, of course).

Volume, wah, and distortions are all before the looper. Loops are (for now) Boss EQ + Flanger, big L6 mods, Delays, tuner, and M5. The Planet Waves tuner is supposedly true bypass, but I’m not sure to what level I really trust that, so I just have it on its own.

I didn’t want to burn a loop on the EQ alone, but it really should be before the distortions (so I can use it as a boost going in).

I just kind of used whatever cables were in the boneyard, and the bigger ones are getting in the way (of course). I always liked those George L’s (there are a few on the board), but they start to get a little pricey. The secret with those is to use a little tape to keep the head from unscrewing – I think they caught on and started making plastic caps for them. Ten bucks a cable starts to get a little pricey, though, especially if the setup is still in flux.

I’m not super crazy about the Big Muff (or, maybe it’s just a love/hate relationship or something). I like my Graphic Fuzz a lot better, but that thing is even bigger. The board needs a fuzz for sure, though. I could probably live without the Vintage Rat, too, especially with that Joyride pedal on there. I used to have a Whammy in the bottom right – I’m still on the lookout for another one. And I’m always tempted to do something like put an H9 and M5 on loops and ditch all the delay/mod stuff.

And if anyone’s in the L.A. area with a stash of George L’s or some extra proper pedalboard wires for cheap, PM me.

Going through the Line 6 M5, which is a relatively recent acquisition (thank you, Craigslist!), it’s got all the presets from the MM4 and FM4 – I mean, they’re even in the same order, with the same color (pushing the top left knob changes the mode and the color of the LCD screen – blue is mod, magenta is filter, green is delay, etc.). I’m still comparing the sounds. Does anyone have an opinion on tone differences with these? I might move the M5 to one of the earlier loops so it’s upstream from the delays. I’ve been using it mostly for the spring reverb sound and playing with slap delays.

Not only are those two big pedals (MM/FM) taking up a lot of space, but I’m running them with AC for now, which is kind of a pain – and actually, I’m having to keep the wall warts as far away as possible to keep the noise down (while I’m in “build mode,” anyway…). I think they can actually take DC with a special line adapter for the bigger connector, but they’re still high power.

I really want to add a Whammy, too – that might be a matter of getting one on an external loop or finding one with a true bypass mod and just putting it before the pedalboard, since it would go early in the chain. I had one on my old pedalboard – the ones that you see used (I don’t know what version) really are just way too big. Don’t get me wrong, it’s cool to plug in and go, but I’m already resolved to having the volume pedal off the board.

So I’m thinking about getting an H9 or something. There’s nothing on here to do pitch, although I have an EBS OctaBass which sounds great with just about anything (but it’s not true bypass). I have an Eclipse that I’ve mostly used on mixing projects, but that’s more of something I run after the speaker-mic-pre in the chain. I’m not really trying to do the amp FX loop thing.

I don’t really want to run an amp with channel switching or an FX loop – I’ve never been happy with those. I’m just so much more into the single-ended amps – I’ve A/B’d before, and that’s really where it’s at for me. My vintage tweed Fender is sensitive enough that you can even tell the difference between cables – I mean, it’s really that kind of amp. And I’m not saying that it’s about having “golden ears” to hear the difference – it’s really there, and if you’re riding the edge of that semi-distorted vintage thing, I think we all know it’s very expressive but prone to anything that’s remotely “tone sucking.” So really, where I would go ultimately would be to duplicate a studio approach – miking the amp(s) or cabinet(s) and having the mic pre and Eventide in a rack, and sending that sound, with post processing, to the board or whatever.

This is a deep Rabbit Hole… 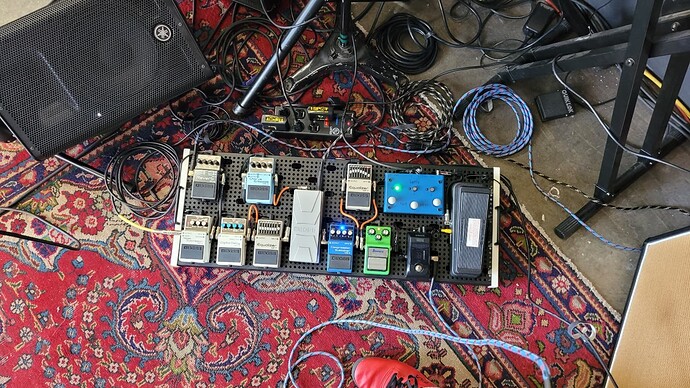 Classic no BS board there man.

@gotmixes that whole 80s swirly rack magic, been in search of a solution myself. Had considered the H9 and or an HX Effects but settled for a tricerachorus and a discovery, looking forward to some inspiration, will take a while for them to reach me which can be frustrating, want to finish the rest of this track but need the chorus for the next section of clean Guitar parts before all hell is unleashed