I’ve always been sort of, well, leery of patterns with repeated notes baked into them, since it seems like sort of a lost opportunity to play even more notes, and more is more, right?

But it occured to me while messing around last night that the Gilbert 6s could easily be played as a pentatonic lick, if you didn’t mind the fact that every third note would be repeated. And, while for maximum effect it should be played even faster (one day, haha), it DOES create kind of a cool shifting pattern at speed: 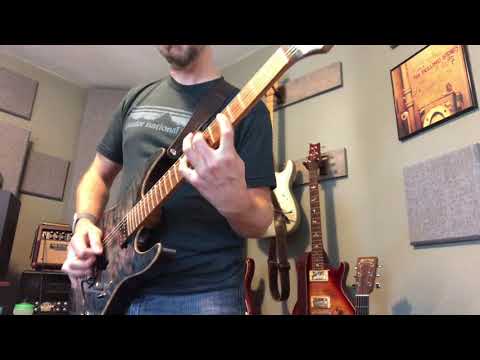 robably a couple bad notes in there, but I just banged that out quickly on my lunch break. My roof is currently being replaced, so apologies for some of the banging at the beginning and end.

…and then reversing that exactly.

USX guys could probably do the same thing pretty easily based on the Yngwie 6s, as well. I suspect a good number of you have already tried this, but just in case, it’s a fun little pattern and a pretty good fretting hand exercise thanks to the stretches.

a pretty good fretting hand exercise thanks to the stretches.

Unless you are a cheater like me, in which case you can order a Jazzmaster mini (22.75 scale) and reduce the stretching

I am finding it’s making less stretchy licks feel easier, but I’ve learned the hard way in the past it’s best to practice this stuff in moderation.

On its own this isn’t a particularly useful lick, I think, but I’m trying to get the hang of shifting this up and down across a couple positions and that might make for some more interesting runs.