Playing bass with fingers and the analogy to alternate picking

Some people play bass with a plectrum, but let’s consider fingers, where it seems like they alternate between the index and ring fingers (I discount the thumb slapping for now). Should I think of bass as being analogous to a DSX motion where index finger is “downstroke” and ring finger is “upstroke?” So, do they strictly alternate between those fingers?

I note that they have an analogy to “sweeping” in the USX sense where they can drag a finger towards the thicker strings, but I presume that this is bad and that one should “never” use the same finger twice in a row?

So if they alternate fingers, this makes me curious: Should I copy them and tap alternately with index and ring fingers?

Finally, if anybody is reading this far, do you have a headless bass to recommend?

I made a thread to see if there was a bass equivalent to CtC, but no replies:

Is there a CTC equivalent for bass? Site Feedback

Not sure if this is the right place to post it (sorry @tommo) but is there something similar to develop right hand technique for bass? Maybe something in the works? I don’t know if the demand for it is high, but I figure the groundwork is there as far as the magnet, analysis, producing the lessons, etc…

My biggest problem is that there’s no direct equivalent from what I saw, especially since the bassists I was looking at use 3 fingers to play fast passages. It seems that you have to find the pattern that works and build it up.

I got an Ibanez EHB1005MS last month and love it! 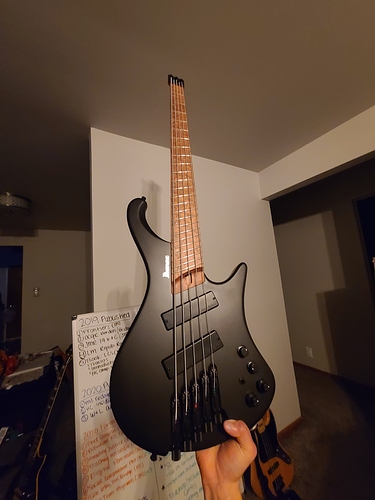 I got an Ibanez EHB1005MS last month and love it!

I think that makes sense, as far as “lowest string” is involved. I play 6 string guitar in standard, but the voicings match a 5 string bass better!

So, do they strictly alternate between those fingers?

Not necessarily. It depends on the player and the material, I would say. (Surprise!)

but I presume that this is bad and that one should “never” use the same finger twice in a row?

I’m sure you can find some schools of thought where that is the case, but I was never taught that way. Some things can only be played with “sweeping”.

A lot of players use three fingers (i m a), by the way!

I know nothing about tapping, I’m afraid.

As for headless basses, I have two. A Hohner Steinberger copy from the 80s (B2A) and another Hohner, “the Jack”. They’re fun to play, no doubt, and pretty well made.

Steinberger XL-2 …IMHO the best bass on the planet. Used bergers are getting rather expensive these days but if you can find a good one well worth it.

Dragging a finger is fine imo. I believe Paco de Lucia did it when decending (sometimes…lol).

If you want to be instrument specific then James Jamerson certainly did it (although he generally use one finger so…).

Getting comfortable with both alternating and dragging would be good.

I don’t think the DSX/USX analogy really translates directly here. The fingers naturally alternate so there is no ‘string hopping’ equivalent (i.e. inefficiency). They also naturally escape. One could say fingers are DSX however they don’t typically strike a note on the way down…so…this is a different beast.

don’t think the DSX/USX analogy really translates directly here. The fingers naturally alternate so there is no ‘string hopping’ equivalent (i.e. inefficiency). They also naturally escape. One could say fingers are DSX however they don’t typically strike a note on the way down…so…this is a different beast.

You make some great points but I can’t let the analogy go just yet, perhaps you can help me here:

I view one finger on bass like only doing “downstrokes.” So that finger has to move really fast! If one uses two fingers, for “downstroke” and “upstroke,” each finger gets to move half as fast, meaning that when the fingers are pushed to their maximum, alternating will be faster (probably almost twice as fast).

Now, I didn’t even know that people can use three fingers, but this will be even faster than two, although this clearly breaks my analogy. The fastest of all, presumably, would be thumb + 3 fingers, and that sounds suspiciously like what a classical guitarist might do if given a bass guitar?

Now I’m wondering if I shouldn’t think plectrum at all and just drop my analogy and pretend that I’m a classical guitarist.

Should I copy them and tap alternately with index and ring fingers?

I’m going back over your original post. Are you talking about ‘tapping’ with alternating fingers or exciting the string (as a pick would)?

I’m going back over your original post. Are you talking about ‘tapping’ with alternating fingers or exciting the string (as a pick would)?

Great question! Both, really. For tapping, it seems that I can use my wrist to drive one finger, pretty quickly (flexion/extension), but it also seems possible to tap with alternating fingers, although it seems a little bit difficult to make them both reliably impact the same string; but perhaps this is a question of practice (and a little bit of wrist movement [deviation]?). For energizing the string, it seems that two fingers works pretty well, as one can energize with the first and tap with the second, etc.

There seems to be a huge amount of stuff that one can be doing here, and I know that my right-hand fingers are a weak part of my overall playing, many modern players have such a strong game both with and without a pick!

In some sense I have recently realized that I’m mostly looking in the past, at guitarists like YJM; while he is still so awesome, he never extended his playing (to my knowledge) to work without a plectrum, like some other players have. I guess a strange analogy is MMA, where the eventual evolution is to be good at jujitsu and Thai boxing, and be bi-modal.

Hopefully at least some of this makes sense!

It all makes sense. It took me number of decades to truly understand that the right hand is the engine…for all styles. My playing has really progressed since getting some semblance of competence with the right hand. I think the advice around the forum to be intuitive, go for the sound you want and deconstruct the mechanical issues when your really stuck is bang on.

So if it sounds good to sweep, then sweeping on the bass is okay. Technique serves to music and not music to technique.

You’re right that most bassists alternate IM. The upstroke/downstroke analogy probably isn’t accurate, as all ‘strokes’ will take the fingers from a higher pitched string to a lower pitched string; they’re all upstrokes, but the second finger gives the first finger the time to reset onto the string for the next stroke.

Re: “I presume this is bad”: There’s a few different common approaches - Some approaches demand strict alternate IM (or MI) picking, even when switching strings where a continuation of the rest stroke would make more sense. Others (in a less codified way) use the continuation of a rest stroke to play the next lower pitched string (Felix Pastorius and Bubby Lewis are good examples of this). Much like USX/DSX, the picking approach will make certain lines/vocab easier/harder to play.

On multi-digit picking: there’s a few other schools here, too:

re: Headless basses: lots of people are liking the new Kiesels for the headless thing.

This is from a longtime CtC lurker and bassist, so there might be some translation to guitar things lost…