I recently started to notice that a lot of the time Yngwie looks like he has his right shoulder raised when playing the guitar: 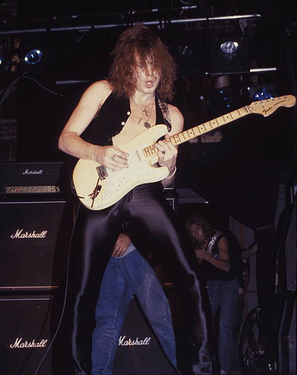 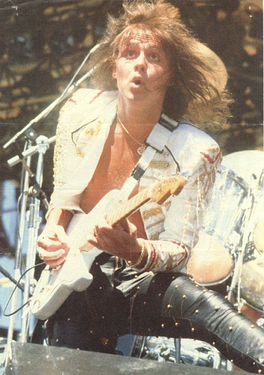 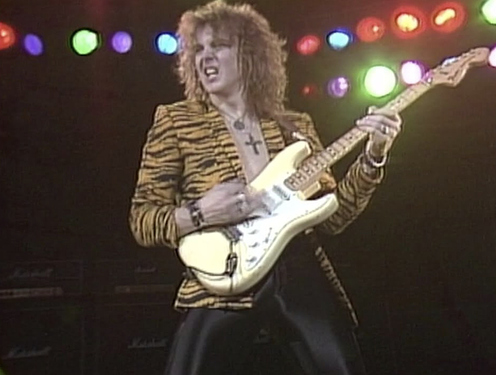 Maybe it’s just the way he is posed but nevertheless I thought I’d give it a go. To do this, I raised my arm placement slightly on the guitar which raised my shoulder.

First thing I noticed was that I could supinate my picking arm a little more and I had to raise my middle, ring and pinky to accommodate this so that they weren’t grazing the strings when I played. I found that compared to my original technique which looked like wrist and a tiny bit of forearm, I was getting a lot more forearm wiggle and playing faster was easier

(Is the forearm mechanic considered to be faster than wrist?)

I thought I’d share this in the hopes that other people could experiment with it and see if they have similar results!

(Is the forearm mechanic considered to be faster than wrist?)

I think that varies from player to player. Shawn Lane used mostly wrist and was definitely faster than Yngwie. Eric Johnson uses mostly wrist and (while I don’t have exact stats) seems not quite as fast as Yngwie. Or maybe they are similar in speed. Not sure. Also, not to conflate, but Yngwie uses a good bit of finger motion too. He actually has several primary motions depending on what licks he’s playing.

I know I’ve heard Troy and others mention that the elbow, for a lot of players, is the fastest mechanic. And indeed some of the fastest players (Batio, Cooley) use an elbow mechanic. But that could just be that since it only goes back and forth in one plane that it’s easier for most people to floor it. They may be capable of getting their wrist to deviate that fast, or their forearm to rotate that quickly, but lack the coordination to make that happen, without putting in enough work. These are fun questions!

Not sure if you’ve seen it, but there is a section in the Primer with several chapters that detail testing various motions to see what you’re inherently fastest at:

Test drive common picking motions with Cracking the Code’s hands-on speed tests! Learning picking motions is a tricky process made all the more complicated by having to operate an actual guitar while you do it. In this section, we simplify the...

Anyway I’ve been working on switching to a forearm rotational mechanic for the past year or so. I’m pleased with my progress but I’m open to trying new things out. I’ll give your observation a go and see what happens!

Yngwie uses a good bit of finger motion too.

Yeah, when I engage finger motion I start to see more forearm motion come into play as well personally

I’ll give your observation a go and see what happens!

So I took a look in the mirror yesterday to try and analyse my motions and shoulder height, surprisingly when I am sitting my right shoulder is already raised noticeably, quite a bit actually

I was having big problems playing standing a few weeks back, my guitar was hanging way lower than when sitting and this caused a big picking angle deviation. I had spent weeks working on my picking sitting down and the picking angle difference when standing meant my motions changed so much I couldn’t pick very well. So I shortened my guitar strap by a few inches and it’s way better. I also try and play standing up for at least 15 minutes every day now.

I’m not sure when I started to raise my shoulder, whether if was a recent thing to improve my picking angle and rotate my pick slightly on the horizontal axis so it’s naturally not as flat when attacking the strings or if I always did it.

I suspect it was recent because I did consciously try to change my pick angle so it’s more like I am edge picking. I just didn’t realise that I was raising my shoulder to do this instead of deviating the wrist.
Interesting.