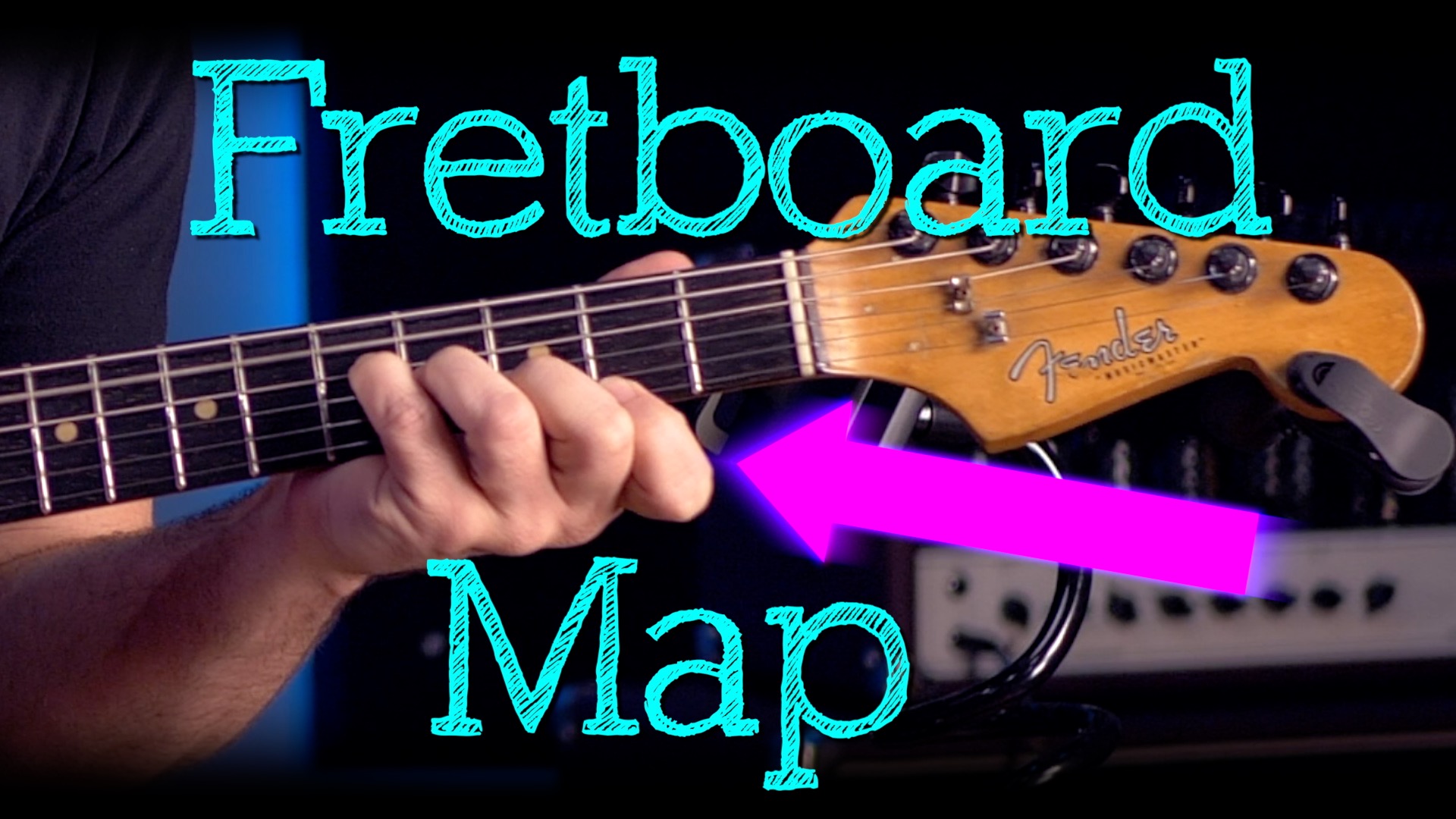 It’s one thing to know about chords and harmony, and another thing to access that knowledge on an actual guitar. Unlike sight-reading approaches, which are designed for quickly locating specific pitches on the fingerboard, guitar improvisation relies...

In our latest video, we tackle one of the biggest challenges for fluent improvisation on the guitar: fretboard navigation.

It’s an intro to a complex mechanical topic, by way of a cool jazzy arpeggio phrase. If you’re experienced with harmony, you may find this helpful in applying it to on-the-fly navigation. And even if you don’t have a strong harmony foundation, you’ll learn a fun phrase and hopefully come away with a better understanding of the topic:

We’re not trying to reinvent the wheel with teaching CAGED, chords and scales, etc. — we know there’s lots of material out there on harmony and theory, and definitely stuff on fretboard mapping as well, though it starts to get more specialized. But the latter topic, by our estimation less well understood, seems like something that could be particularly useful for us to teach.

So…what do you think?

If you have any other ideas for how we can help get the fundamentals of the topic across in an approachable way, let us know, all feedback is appreciated and will help us in putting together future lessons on this sort of thing!

I need to learn more about fretboard mapping

I for one am very interested. If you had some sort of a fret mapping or Harmony course, I’d buy it in a second.

I liked this video and would enjoy more like it. It’s a little beyond where I’m at in terms of fretboard/harmonic knowledge and that’s perfect. I can understand it but will have to do some work to be able to absorb/memorize and use the new knowledge. More in this area would be great, thanks!

This video is so cool. Just recently I thought it’s such a shame that there are no theory lessons here. Fretboard mapping is what I am concerned with most besides pickslanting when it comes to practicing. Maybe you guys could also look a bit into the caged system and how to practice it and how to think of it when doing it. I know that there’s a lot of stuff on Youtube about that too, but you guys have always used amazing animations in terms of picking. I wonder how awesome and incredibly helpful it would be to see something like that related to fretboard mapping.

I agree. It would be great to have more videos on this topic.

I usually navigate the fretboard by thinking of the 7 modes, instead of boxed scale shapes that fit a chord (caged). Since the only chord being played is A7 which is the 5th degree of the D major scale, would it make sense to think of this as an improvisation in A Mixolydian?

For sure, it is A mixolydian. What’s helping you here is knowing that the barre chord “area” has this lick built right into it — or right next to it, in this case. Anywhere on the neck you play this chord, or any variation of it, you can play this phrase immediately because you know where to find it. You’re not worrying about scales or even note names. You’re thinking about phrases, or really, phrase parts which you can tweak in different ways each time you play them. And you can connect them rapidly to other phrase parts because you’re building this mental database of where they are all hidden — like a squirrel burying nuts.

I’d love to learn more about fretboard mapping in the CTC style.

I just wanted to give a shoutout to Troy. I really appreciate branching out into the realm of note selection/what to play. I know the original idea was technique but this is a very welcome addition so thank you and please consider doing more stuff like this.

FYI moved this over from your other thread because we had this one going already — sorry for the switcheroo.

As Brendan said, we don’t necessarily want to reinvent the wheel here because there’s stuff out there on these topics already. But my impression is that there is an audience out there like me, who came up more through pop and rock, and who don’t necessarily know where to begin or that subjects like mapping even really exist. If we can give you a simple statement of what the problem is, why mapping needs to be considered, and give you a “mapping for dummies”-level introduction to how great players solve it, then players go always go and seek out more sophisticated solutions as their interest dictates.

I too found this video really great, arpegs and lines are so important and great playing btw.

What I really liked was the information kind of bridged the gap between theory and hands on. I have a stupid amount of theory in my head but it is not always clear how to translate that to the fretboard. I think some bite size shapes and couple riffs around an interesting chord shape is very helpful.

@Troy you talk about there being methods out there already to do this stuff and that you guys aren’t looking to reinvent the wheel. I’d like to say that personally I studied some of the methods like CAGED, yet I still can’t apply it in a way that consistently sounds good.

There is a big gap between knowing the method and actually making it sound good, that I feel no one explains. Even in the Martin Miller segment, even he doesn’t really know. Yet there is a definite science to it. “Playing this chord tone or sequence of notes over the V chord will ALWAYS sound like this”. If that makes sense.

I think the key is “target notes”. It’s something frank gambale talks about and I’ve heard other players talk about. Making sure to target a specific chord tone to hit when the chord changes instead of mindlessly playing the scale.

I’ve heard targeting the 3rd of the chord as being a “secret”. As that is the note that tells the listener that the chord has changed, and you can hear it even if no chords are playing under you.

One exercise I’ve seen before is to take a chord progression, start simple and pick a simple pentatonic scale to play over the whole thing, but determine what the 3rd is for each chord, and when the chord changes make sure you land on that 3rd. So if the chord is G Major, the 3rd would be B, for C Major, the 3rd is E.

Do the same thing but now target the Root of each chord, then the 5th’s, then 7th’s, then 9ths, etc.

Hi Rich! Yes, a big part of this is learning to speak the language of the musical style you’re improvising in. This means, for example, learning how to, basically, compose lines so that they sound like jazz, where the scale tones are the strong beats, the passing tones are the weak beats, and the resolution or target tones are the downbeats - or near enough that they are syncopated.

We do touch on this in the lesson - I talk about targeting the third a couple points. Did that come across? Other targets work well too though - 1, 3, 5, 7, 9. Really only the 4 doesn’t work unless you’re going for a suspension kind of sound.

In general though I think people kind of know this at some level, even if it’s subconscious. What’s missing a lot of time is the “how”, like how do you actually work through the process of writing these kinds of phrases. Again I think other people have done a lot more work in this area, but we can may do the simplified entry level version of it moving forward just help people along.

Any rule is to break. For example, some jazz-guys play whole-half diminished scale over V7 despite that this scale doesn’t include major 3rd and implies kinda minor sound… though you could consider this as #9.

Hey there Troy and Brendan, et al, in late response to your email, with thanks for posing the questions… I’ll say this…

Understanding that you don’t want to reinvent the wheel, I’ve subscribed these now several years to support the continuation of the decidedly successful breakthroughs-illustrated-via-animation, in depth analysis and documentation of proven picking techniques, and related (e.g. Noa Kageyama, and other sports science experts). So I won’t necessarily discourage you from exploring the topic of fretboard navigation, but it probably won’t be the reason I subscribe.

Disclaimer being, my system marries what you separate out as a “sight-reading approaches” with the practical needs of an improvising jazz guitarist to have everything one needs under one’s fingers in all possible keys. If one opens up a copy of the Charlie Parker Omnibook and tries to recreate one of the improvised solos, one is faced with what led to my own work and discoveries. If I separate the two concerns out in the abstract, I wouldn’t be able to play.

So if you do go down this path, I encourage you to interview improvising musicians of all stripes to ascertain their respective creative upbringings. And I caution against leading questions about the same.

Thanks for the feedback Daniel! Good suggestion about interviewing more improvisers to learn about their creative (as well as technical) approaches.

Extracting insight nuggets from empirical research is our wheelhouse, and there’s probably a way we can give folks some helpful practical takeaways based on what we learn from great musicians, without getting overly deep into the various unified theories for improvisation / fretboard mapping. (Though we’d aim to research and try to distill as much of the existing stuff as we can, too.)

I love the idea of fretboard mapping, and find it very useful if you guys dive into it. I studied harmony for many years and really enjoy it, but there’s a big gap between my knowledge of theory and knowing how to apply it on the fretboard. Thanks again!

Got it, thanks! Any particular questions / subtopics you’d like to see explored in more depth when it comes to this stuff? What would you say has been your biggest challenge so far going from theory to practical applications?