If I use the speed tests regurlarly as an additional exercise to increase flexibility and agility in the picking hand. Do you think it will have a massive impact on all the range of motions?

@Jonway123 are you referring to the tapping tests?

No. The limiting factor is neural and not muscular. In strength training we also train the neural component, to be able to recruit more muscle fibers for bouts of effort, but that’s not the limiting factor for guitar playing. The rate of neuronal firing / speed of propagation is, and that can’t be trained.

The rate of neuronal firing / speed of propagation is, and that can’t be trained.

I see what you are saying, however I would think that the technical execution of the table tapping tests themselves, i.e. the coordination aspect, can be improved a little. That might allow one to reach slightly higher tempos than the initial test.

Whether that will translate in slightly higher picking speed, not sure!

By the way I changed the title and I hope it’s now clearer (maybe a little clickbaity?

) Please let me know if I’m misrepresenting the intent of the thread!

the coordination aspect, can be improved a little

edit: I suppose the exception here is the beginners phase. Where you can do the motion in a tapping test, but when you go to the guitar another motion happens. Suppose burning it in with more table tapping might be beneficial then?

edit: I suppose the exception here is the beginners phase. Where you can do the motion in a tapping test, but when you go to the guitar another motion happens. Suppose burning it in with more table tapping might be beneficial then?

I’ve gotten ‘decent’ at a couple motions at this point. When it was something brand new, I did spend some time away from the guitar doing the motions. Not the table tap tests specifically, but usually while doing something like watching tv I’d work on reverse dart thrower, or forearm rotation. As the motions got more comfortable I could do them faster. I do think that’s a coordination thing though. Getting used to the exact muscles/joints involved without some other motion trying to take over.

It’s worth pointing out (as Troy often does) that getting good at different motions isn’t what most people should go for. Most elite level player we all look up to just has a primary motion. Sure, there are outliers, but the majority just rely on their “bread 'n butter” moton.

For me, it’s fun to learn motions because technique fascinates me. Most people just want to get better at music though lol! In that case, the tried and true advice we hear on here over and over is to first master the motion that comes most natural to you. Once that’s down, you have such a great baseline of what “correct” feels like that it’s often easier to try picking up other motions. You’ll know almost right away if you’re doing the new motion correctly or not because you’ll have a reference point.

What do you mean by “flexibility” and “agility”? Flexibility as in increased range of motion, as lars indicates? Agility as in, ability to play complicated things that involve jumping around between strings? I can’t think of any reason why tapping on a table would improve either of these things.

More generally, at this point you’d really have to convince me that any type of “exercise”, in the gym/workout sense of the term, is actually helpful for getting better at guitar. I just haven’t really seen any good evidence for this. A lot of people say this kind of thing, but as far as evidence, I still need convincing. Injuries and physical therapy are one case where I can certainly see the benefit.

But otherwise, almost everything you do on a guitar requires so little strength and endurance when done correctly that 99 times out of 100, when people come to us with problems, the answer is that they haven’t learned the guitar-specific coordination yet, or they’re simply flat-out doing it wrong.

So, long story short, try to think in terms of problems you can identify. Is there a problem with your technique where you think some physical characteristic like endurance or strength seems to be lacking? If so, that might be a motion efficiency issue that you can fix with better technique. And so on.

More generally, at this point you’d really have to convince me that any type of “exercise”, in the gym/workout sense of the term, is actually helpful for getting better at guitar.

i mean is the pattern 1 4 2(3) 4 basically an exercise for developing your pinky? so is that not the same as what you do in the gym?

what exactly do you mean?

But they are guitar based exercises, not like trying to lift weights in an attempt to increase your elbow technique etc etc.

and in this same thinking i could say prove to me that working out in the gym doesn’t help. and i am not saying it does or it doesn’t, but i would say go workout as it benefits your life.

Thanks for the advice.I am particularly interested in the double escape (clock face) motion and if I do come to a speed barrier,I will immediately have to go back to the drawing board and examine closely with the technique that I am playing and try a different approach such as maybe slightly changing the angle of pronation or supination, or maybe the sequence that I’m playing doesn’t match the picking style.Correct me if I am wrong. I will upload a video as soon as possible. One other question, does the double escape motion apply to a sequence that has a constant one string skip or a two string skip for example : a back and forth motion of the following sequence such as , the A -string , G -string , and the E string. I have a feeling that it is designed for a mixture of alternate picking and string skipping?

The rate of neuronal firing / speed of propagation is, and that can’t be trained.

what do you mean by this exactly? i have never heard this term speed of propagation.

Shortest possible answer to your questions, do this

I will upload a video as soon as possible.

Slightly longer answer: “developing a double escape motion” might be a misleading way to think about it, because it suggests there exists one magical technique that can play all possible combinations of things.

The more practical way to think about it is to develop a vocabulary that involves a lot of different combinations of string changes. Guitar transcriptions of bluegrass standards or classical pieces written for violin / cello often come up as good examples of music that can help develop this kind of vocabulary.

But most importantly, you may first want to check that the simpler stuff (single string tremolo, hand sync etc.) is working well. Hence posting a video is the best way to get started

To add to what Tommo said, you are describing a picking style we call “mixed escape”. Because when you film the motions, you don’t always see double escape motion. As you are pointing out, what if the phrase is only a single escape phrase? Sometimes even players that can do double escape motion don’t actually do it when the phrase doesn’t require it. These variations are mostly subconscious so this is not something you will worry about trying to deliberately “do”.

Instead, to learn the “mixed escape” playing style you adopt one form and use that for everything. You don’t need to think about the escape deliberately, you will learn them as needed for the given phrase based on feedback from errors and feeling of smoothness. However I will note that the most common form of mixed escape is wrist motion, so if you are looking for an arbitrary starting point, I recommend the very common Andy Wood and Al Di Meola form: 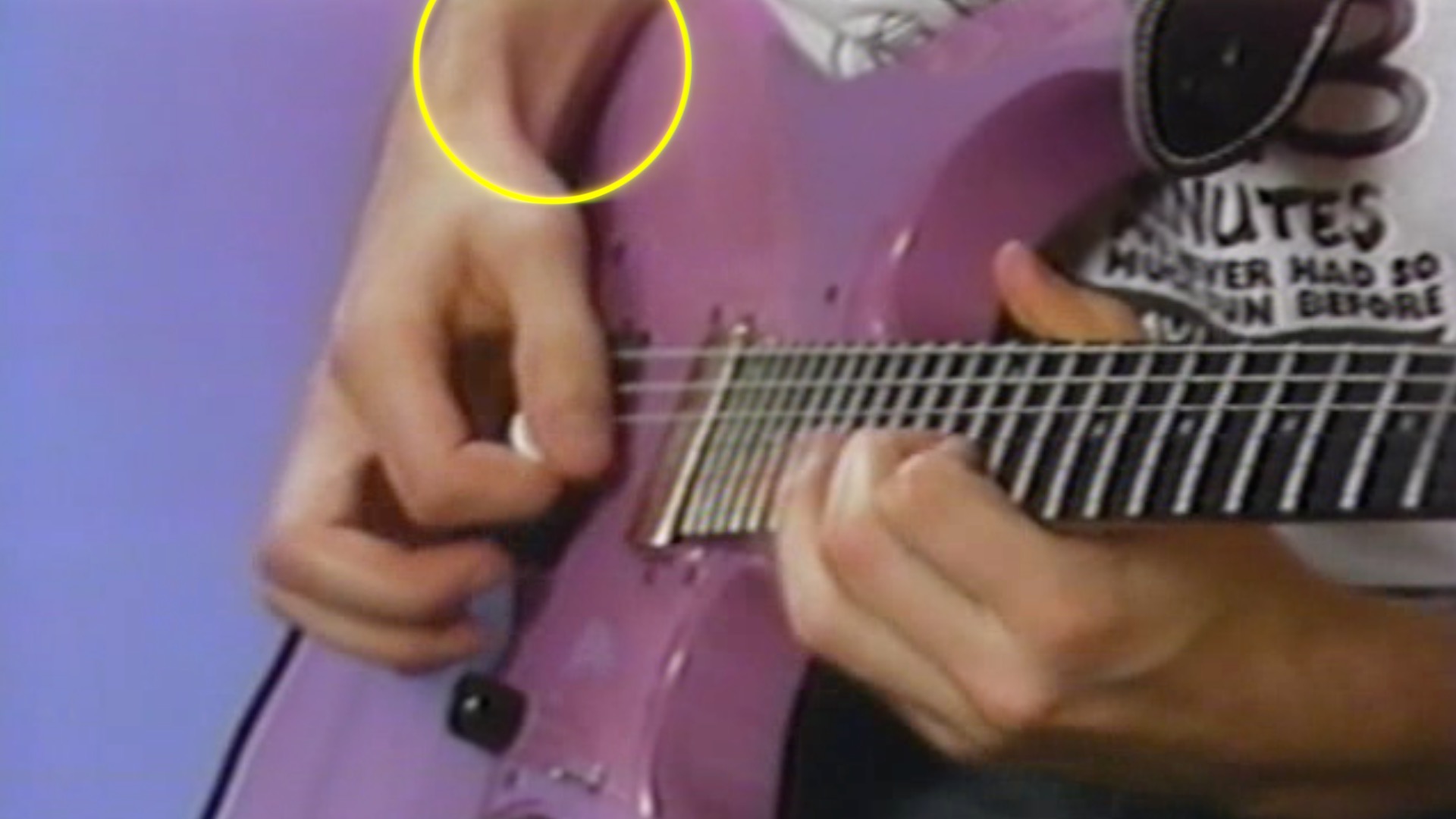 The initial steps are always the same: do table tap tests, do tremolo, etc. There will be no difference in motion feel, speed capability, etc. So don’t worry about that either. The only difference is the repertoire.

Finally, note that as @joebegly is saying, our usual advice is not to try and “choose” the technique you want. Instead, we recommend just going fast with whatever technique works first, no matter what escape it has. Because the most important first step is learning what “fast and easy” feels like. Once you have that, it gets much easier to learn other motions because you have a reference point for what efficient and smooth motion.

On a side note, this is why I think it’s important to ask people why they are asking a question that they post in the forum. Because very often, the question pertains to something they want to do, but turns out to not be that relevant to it. In this case, if the goal is learning mixed escape playing, or really any of the basic playing styles that we cover, there is really no benefit I can think of in using the table tap tests as a training device beyond the initial measurement. The tests are just there to give you a rough approximation of the upper limits, so that you know what is possible and don’t get stuck at the very slow practice speeds of ye olden days.

Let me know if I’m explaining this clearly!

Let me know if I’m explaining this clearly!

crystal clear however if we wear a gold rolex will this increase the speed of the tapping?