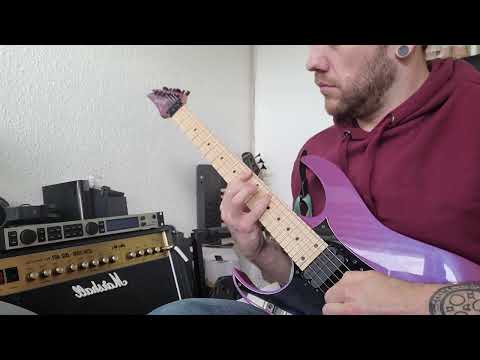 I’d really appreciate it if someone could point out where I’m going wrong with my sweep picking.
It sounds pretty clean to me, and I think I have the basic technique down, but as soon as I speed it up to demisemiquavers at 80bpm it completely falls apart. Missed notes, notes not ringing out correctly.
Does anyone have any advice for me? Does the technique look correct?
Any and all constructive advice appreciated.

For some background, I have played for years and years, but was never any good. Just played riffs really; but I have been taking fortnightly private lessons for the past 8 months and have learned tons; I’m really making a mighty effort to improve. Focussing on getting sweep picking down, as I’m struggling with this a lot more than I did with alternate picking, legato or economy picking.
I always practice with a metronome, and practice for around 90 minutes every day.

Thanks for any help!

I agree, would like to skype chat with him sometime to pick his brain on the exercises, and approach he uses in this area. He seems to have gotten the method down of how to practice in this area cause it shows in his videos.

Second would be your picking hand has too much friction on the strings. I shouldn’t be able to see your picking hand “bounce” off every string. It needs to be a seamless motion from string to string. Slant your pick more so its not digging into the strings as much. Sweep the arpeggio, don’t pick it.

The definition of an arpeggio is the notes of a chord played in succession, either ascending or descending. You’re playing a major chord, but each note individually. The picking for the arpeggio should be the same as the picking as an open chord if you were going to strum it down and up slowly but play each not individually. I highly doubt you pick an open G chord that way.

Thanks for the advice, @CharvelSoCal I do slant some, but I find it sounds a bit scratchy and chirpy if I slant much further. I will definitely play with pick angle tomorrow though, and see if I can find an angle that’s less bouncy!

Also, my tutor avoided the three string sweeps, because he’s having me learn the arpeggios at the same time.
(Done major, minor, maj7, m7, dominant 7)

Have not done any triads yet though, so I will ask about those on Sunday.

You’re probably like 90% of the way there so keep at it!

The only things I’m noticing when I compare your video with what I’m doing is that your picking hand doesn’t seem quite as smooth, looks like it’s fighting the strings a little more.

The other thing is that the notes are bleeding into each other a little bit. I try to touch really lightly with my fretting hand; try to imagine it’s being lazy and really make sure only one finger is pressed down at a time while at the same time keeping a good pick attack 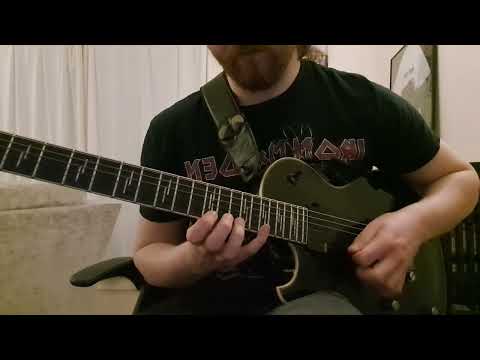 (I’ve practiced loads of sweeping in the past but don’t really use it in day to day playing so apologies for any sloppiness!)

Thanks for the help and video, @Jacklr !

How are you getting those notes to ring so clear, while meeting no visible string resistance?
You’ve got tonnes of clarity, but the strings don’t appear to move at all.

At this point I’m definitely thinking I’m digging in far too much.

Your picking hand looks a bit too stiff, but it’s a little tough to see everything the picking hand is doing there in the video.

There are ways of sweeping with a stiff grip on the pick like that but it involves forearm rotation to change the pickslant more actively, you could also try that way. Jason Richardson seems like he does something like that.

I went ahead and made a video with some close ups of a couple of a different ways I sweep, if you look at my hand you’ll see a number of different joints involved - one you see my thumb is moving, I have a bit of thumb/finger involvement moving across the strings, and I let the pick angle change.

In the palm anchored approach it’s a bit more like what I think you’re doing. I anchor my palm and my arm is moving when tracking the strings - but I’m getting a large chunk of my movement from a combination of forearm rotation - plus a bit of thumb/finger movement for extra range.

When I start a standard sweep shape that has two notes on the low and high strings, I’m usually starting on an upstroke and doing a hammer on, and ending with a hammer-on/pull-off on the second note on the high string. 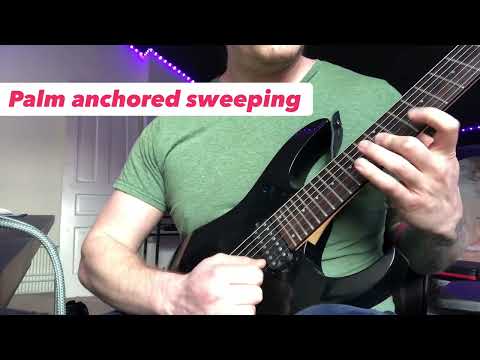 What a great video! I don’t own a shred DVD or video (yes, I am that old) where they give expert tips like you’ve done.

@cmcgee11235 Amazing. Thanks so much for the demo and the advice. Really appreciate it.
Seeing what you’re doing from a variety of angles is mega useful.

From what I can see, I’m definitely digging in too hard, and my picking form is way too rigid.

I’ll give it a shot in today’s practice and probably check in later once I’ve spent some time trying to implement these suggestions.

No problem! Definitely wanna see if it works for you! 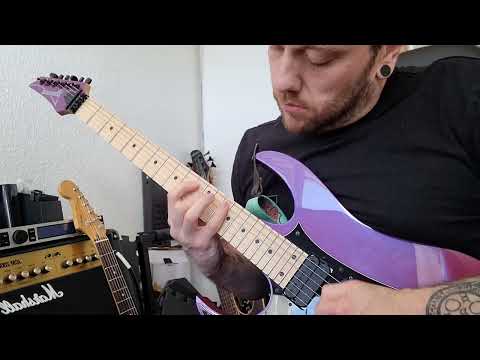 So after 20 minutes of figuring out how to apply what was suggested in this thread by @cmcgee11235 and @Jacklr here are some sextuplets at 100bpm. Much much better. Going to take some practice to speed up, but immediate improvement in my opinion. Much smoother, much less bouncy.

Switched to a less thick pick (1.5mm jazz III XL, from 2mm Andy James Flow) which helped a lot with the bounce.

Nice! Definitely want to get started on a more in depth sweep picking primer so I’m glad this approach is working that fast.

Just a couple of questions:

So after 20 minutes of figuring out how to apply what was suggested in this thread by @cmcgee11235 and @Jacklr here are some sextuplets at 100bpm. Much much better. Going to take some practice to speed up, but immediate improvement in my opinion.

Agreed! Congrats! Even though it’s not 100% ‘there’ yet, that’s amazing progress and now you’ve got what you need to get it to 100% Rock on

@Fossegrim All three really. I’d like to get the technique perfect first and foremost. I’m using my ears to guide me rather than how it feels to do. I know how it should sound, and how it looks, but I don’t know how it should feel, and I’ve struggled to get it to sound how I’d like it to.

I’ve really avoided the three string sweeps because a lot of good sweepers say to avoid them when learning the technique (Dean Lamb, Ben Eller, my tutor, to name 3) because they’re cramped and why put hours and hours into learning how to sweep 3 when you can put the same time into learning to sweep 5 or 6, which is more efficient time-wise.
I don’t have a dog in that race, I just do as I’m told, hahaha.

@Fossegrim All three really. I’d like to get the technique perfect first and foremost. I’m using my ears to guide me rather than how it feels to do. I know how it should sound, and how it looks, but I don’t know how it should feel, and I’ve struggled to get it to sound how I’d like it to.

So sweep picking is a technique, just like economy picking where there is a very wide variance to all three of these aspects, and a range of what many would find acceptable, the trick really is trying to find the one that you do. How it feels is important, but is secondary to how it sounds, although the two are very dependent on each other. My guess, from what you have said so far, is that you are trying to get the type of sweep picking that’s sounds more percussive and more separated or rhythmically controlled , than the type that has smoother with slight bleed.

Another thing to point out is that since you have set up your camera angle in such a way. It is a little hard to fully analyze what your strumming hand is doing.

I’ve really avoided the three string sweeps because a lot of good sweepers say to avoid them when learning the technique (Dean Lamb, Ben Eller, my tutor, to name 3) because they’re cramped and why put hours and hours into learning how to sweep 3 when you can put the same time into learning to sweep 5 or 6, which is more efficient time-wise.
I don’t have a dog in that race, I just do as I’m told, hahaha.

Because they actually can be very useful in developing the technique, and to very gradually and cleanly push your limits. They can also more easily be used to open up more rhythmic deviations than just triplets or sextuplets that are more commonly performed with 5 string arpeggios.

I also used to think that way too, then when I went to college and started taking lessons from a guy named Joe, I began to see the error in this thinking. I realized that while it was easy for me to sweep across 5 strings very fast as kind of a trick, it was hard to rhythmically control sweeping across three, and damn nearly impossible for me to do two string ones (think the break down in the song Rising Force). It forced me to rethink this a bit and take a step back. It all has a place.

Anyway. I’m going to see what I can do to offer my .02 into this and try to touch on some things from my perspective on it, and see if I can throw up a vid and at least a little lick or etude that may help in this.

There’s also a difference in how to approach sweeps ending on a single note on the last string/first string.

If I sweep a minor arp on the 3 high strings, it’s all DWPS with an escape upstroke hitting the B string and then sweeping down on G B E. I fought this for a long time but it’s really the smoothest way to handle it.

However, a diminished sweep gives you the extra note on the G string and you can change pickslant as you would for the 5 string box shapes.

Then the Down Down Hammer/pulloff upstroke pattern for two string sweeps is the building block Jeff Loomis’ miles of machine type cascading runs are built from. But there’s a different kind of you want a double stroke pattern like George Bellas does with pivot tones which he also calls “2 string sweeping”, really involves you hitting adjacent strings while changing pickslant and is effectively sort of rapidly switching economy picking.

Sorry for such a late response. Just so we are on the same page, are you talking about a sweep sound closer to this. I posted a simple 5 string sweep on this thread a while back, and it popped up again which reminded me that I had something on here that might sound close to what you are describing.

How are you with just plain ol’ simple sweeps that descend like this one below (sorry the audio is shitty I just couldn’t bother to do anything but my phone right now): [Sweep lick] Tab: [image]