The correct way to execute the thumb and forefinger technique

The way I have been executing the Yngwie picking technique of using the thumb and forefinger is basically pushing the pick forward and pulling it backward with the forefinger and thumb.

If someone has more info on this or could post some video I would appreciate it. If there is something I’m not doing right when I do it I would like to know.

If this is in reference to the videos you posted the other day, the general gist of it is correct, however Yngwie does it in combination with other motions. The thumb forefinger movement is more a secondary motion and his wrist rotation is the primary, and it’s not as pronounced. He also only really seems to do it for certain things, primarily single string lines, and some what for three string arpeggios. At times yngwie even incorporates forearm movement with a more ridged hand as well. In your video you tended to use it as a primary motion while keeping your hand anchored in place, which may make it pretty ineffective for what you want it to do, because you are only going to be able to pick as fast as you can move it back and forth that way.

What I would do in your case is not focus on finger and thumb movements at all as your primary movement, and find the one that allows you to play the fastest you can the most naturally, and without getting snagged on the strings. Once you do, then you can focus on adding thumb movements as a secondary motion.

Still, that’s going to be more academic for your immediate needs. I’m looking forward to your fast tremolo footage

That’s really going to be the way forward for you. Maybe some day you can come back to the thumb/finger thing but pursuing that ‘just because’ won’t get the immediate results of finding out what you’re naturally fast with and using that.

@joebegly Ha! My old teacher! I was going to bring him up but you beat me to it. If you notice with Joe, again it’s subtle! And not his primary motion, he incorporates just a little or rather just enough of that to get that little bit of extra gas, and that’s how you effectively use it!

I never see Yngwie’s wrist move. I never see it rotate. I have a hard time believing that his primary motion is from the wrist because his wrist seems so still.

There is an excellent Yngwie seminar here at CTC (Volcano) where Troy breaks all that stuff down and shows the rotation etc. I never really noticed it nefore either till I watched the seminar.

There is a LOT going on with Yngwie’s brilliant picking method that also includes the finger/ thumb stuff you are inerested in. Do you have a particular lick you are studying?

Trust me it does. Wrist rotation is his primary movement, with him it’s more of a subtle gyration though, with his ring finger anchored on the pick guard and his pinky over the volume control, and not as visually obvious as when EVH does his fast eruption trem picking. He also doesn’t use a super firm grip on the pick, and is only holds the pick as tight as he absolutely needs to. When Yngwie tries to do all alternate picking across strings, which is something he doesn’t do very often, he uses more large forearm movement. This you can see in the 90’s young guitar videos and some things he put out I believe for guitar world in the earlier naughts.

Finger thumb movement on its own, is not a very efficient technique at all, and has very little power on its own. People who utilize it like yngwie or Eric Johnson are combining it with other motions.

Here look. His wrist is moving all over in this, also with some examples of forearm movement. His thumb and index are the joints that barely move that much: 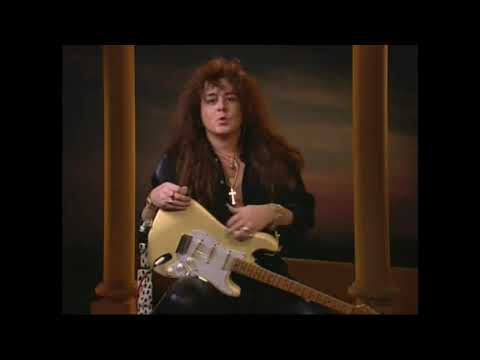 What you may be confusing with thumb and index movement is likely his wrist movements while he is planted on the pick guard. Notice the core of his movement isn’t coming from his first knuckle joints, it’s coming from the joints that connect to the wrist.

The finger and thumb thing he does isn’t his fast primary, meaning when he plays on one string, it’s mainly forearm and wrist blend.
He used the thumb and index motion for certain things, but it’s all blended in together so it’s hard to say specifically how to add it to your arsenal. Most likely used for small sweeps but I’m guessing he just feels it out.

I would go as far as to say he barely uses it. If you take a look at his REH instructional video, it’s all mostly wrist. Any thumb movements he does looks mostly to get different angles on the pick and strings for certain things like sweeping and economy picking.