The ubiquitous metal rhythm "pedal' riff pattern: how do you do it? [Painkiller / Technical Difficulties etc.]

Hi everyone!
Now this question has been bugging me for a good while. It’s a little outside of the direct lines of application of most of what’s in the course material, but as this forum is full of knowledgeable people… I’m sure I’ll get several wildly conflicting answers with great justification why each of them is the only correct one

and that would be great.
Given how ubiquitous the pattern in question is, I figure it’s something worth learning to play efficiently. Also, that makes it probable that everyone has this figured out and it’s just me who hasn’t…

As an example I’ll use the riff from Judas Priest’s Painkiller, but this pattern is literally all over metal music:

I’m talking about the repeated three note groups consisting of one note on a higher string followed by two notes on a lower string. Let’s ignore that there’s other stuff at the end of phrases now; say, we’re only interested in the first 12 notes of each bar.
How do you play them?

I can think of two possible “solutions”:

Straight alternate picking (DUD UDU DUD UDU…)
Pros: straight alternate picking is always easiest to think through
Cons: It sucks that the accented note gets a different pickstroke each time; also, the pickslants have to vary if you want to avoid stringhopping, which sounds too complicated for such a ubiquitous rhythm phrase which should be easy to play.

DUD-sweep-DUD-sweep-…
Using DSX, play the higher note as a downstroke; the first pedal note is a natural upstroke, comfortable due to the DSX; the second pedal note is a downstroke, followed by a sweep to the next downstroke on the start of the next three-note group.
Pros: symmetry; consistent DSX
Cons: high risk of playing the high note twice when switching strings (probably just my incompetence here though); the sweep is in the uncomfortable direction for DSX

Which one makes more sense to you?
Are there other good possibilities that I am missing?

The answer: It depends on your objectives. Strict alternate picking is likely the way most people would play it, regardless of whether you are starting with a down or an up stroke because it tends to emphasize the rhythmic “hits” of the riff a little more. The particular pain killer riff is also slow enough, that most wouldn’t have much difficulty playing it at speed with strict alternate picking regardless of their picking.

Trying to do it with sweeping, to me is clumsy, and really unnecessary, but might be good if you are trying to perfect economy or sweeping. I feel most people would have a harder time with this, and locking it in.

I would definitely recommend downpicking this riff at this tempo! Faster speeds it just depends on what you’re comfortable with.

Yes, the Painkiller example is indeed slow enough to do it without much consideration. My bad. I only meant to take Painkiller as an example because everyone knows the pattern.
However, what if the tempo was higher?

I’m not sure if I’m missing something, but I’d go U-U-D in a cycle, holding DSX. And for U → U, I’d surely be thinking “rest stroke.” Would this work?

I’m not sure if I’m missing something, but I’d go U-U-D in a cycle, holding DSX. And for U → U, I’d surely be thinking “rest stroke.” Would this work?

How about playing the fretted notes with middle finger, a la hybrid picked?

I stumbled across that sort of thing years ago trying to do something with powerchords; hybrid stroke always happens (for me) after an upstroke for maximum speed… Now I’m not sure, but I *think that might be how SWYBRID works… Anyways, say the word and I’ll make you a quick tutorial on it if you’re stuck…

We did an Instagram thingy about this a while ago, in my case I was using alternate picking and (mostly) wrist motions:

All of this really depends on 1. What you can cleanly do, and 2. What kind of sound you want.

For slow tempo’s and a heavy sound, downstroke it all. for medium to fast tempos where downstrokes only start to become unattainable, but you still need a lot of aggressive attack still, alternate picking.

For some of the more exotic methods like adding a sweep, it tends to be a matter if you can do it cleanly in time, and do it in a way that accents the riff, or if it has the sound. Hybrid picking may work fine for executing the riff, but may not have the sound you want for these kinds of riffs.

We did an Instagram thingy about this a while ago, in my case I was using alternate picking and (mostly) wrist motions:

I’m not sure I find the main riff to that song too difficult to play alternate picked since it’s only at 120-126 or so. I think arguable the hardest part of that song is transitioning between the 4’s and 6’s groupings particularly when he does that decending run to finish up the section and you have to jump from a lower set of strings to a higher set in time.

I’ve always sucked at this sort of picking pattern. I don’t play metal much, but I do remember practicing this exact picking pattern before for some reason I can’t remember now.

At the time, I was practicing it with economy picking and I struggled getting it tight enough and also trying to maintain strong articulation with sweeps was another issue.

If I were to practice it now. I’d try start with a downstroke and just alternate pick it. Most likely just using the wrist. Although my primary is forearm and wrist, I think this would be more straightforward with wrist only.

I was using alternate picking

I no longer can define what “alternate picking” is any more!

Is it “alternate sides of the pick hit strings?” Indeed, I concluded that alternate picking is frequently impossible without a good double-escaped motion to clean up 1nps situations. So, by the above, do you mean you used a double-escape motion?

So, by the above, do you mean you used a double-escape motion?

Not exactly! If you look at the video again you’ll notice troy added some USX/DSX annotations. So I basically moved from one type of single escape to the other, by using one double escaped pickstroke at the required switching point. At least if I remember correctly

How would one go about making sure to avoid stringhopping while doing all this jumping between the different escapes? I’m not that far ahead in the studies, but I can do both DSX and USX lines to some extent with little tension (rather more limited by the left hand/hand sync, but not by tremolo or string switching speed). However, this kind of line makes me tired pretty quickly, which suggests that the motions are inefficient. Any ideas?

I guess I’m always a little surprised how many people have problems with picking patterns like these.

I guess I’m always a little surprised how many people have problems with picking patterns like these.

Everybody will have a problem at a high-enough speed, and problems will actually show up well before then if somebody threw out a requirement for the maximum permitted deviation from the written rhythm.

But what is so interesting to me is that there are so many solutions to such a simple problem, ranging from mine (arguably the simplest) to some that are quite sophisticated. This is the major fun of the CtC forum, seeing what other people consider “intuitive.”

But what is so interesting to me is that there are so many solutions to such a simple problem, ranging from mine (arguably the simplest) to some that are quite sophisticated. This is the major fun of the CtC forum, seeing what other people consider “intuitive.”

That’s only if you can actually play it that way, and do so while emphasizing the right hits on the rhythm with the drummer.

That said I really think there is a maximum speed in which licks like this sound good. Anything after starts to become incoherent, loses impact, and detracts from what it’s supposed to convey.

Sorry if anyone else said this exact thing but… This is for sure up to you. I saw Richie Faulkner explain this riff and he said he does ud on e string d on a string repeat. He also played it all down strokes and said “oh, well they sound exactly the same” he just prefers the economy of alternating his picking. The patter is whatever works for you really.

He also played it all down strokes and said “oh, well they sound exactly the same” he just prefers the economy of alternating his picking.

I work to make upstrokes and downstrokes indistinguishable, just for these reasons, given that I often can’t choose which one I am “forced”to use for a given note. In fact, I’m trying to get better with HO/PO to better hide “escape hatches” that might be necessary to make a piece work!

For such metal riffs, I would use all downstrokes or straight alternate picking, depending on your ability.

If you’ve got the picking speed of James Hetfield, play all downstrokes all the time.

If not, play alternate picking: DUD, UDU, repeat, rock out.

I gave this riff a shot but I have to say it’s pretty hard to get good consistency. I would suggest looking at @tommo s video for a much more elegant execution. My switch to DSX is super obvious and has never been really smooth. I also think there are swipes in there. Occasionally it sounds ok though and it doesn’t feel like as much work as it looks like. 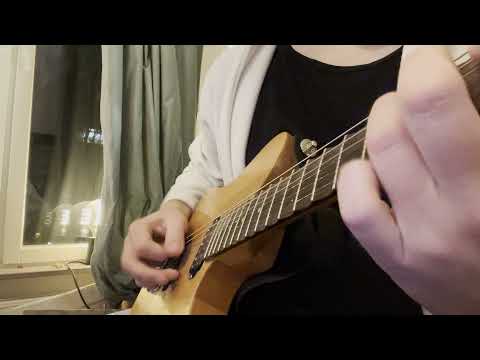 I would say alternate picking this is a good way to go as it is easy to get rhythmically confused with sweeping. At least in my experience.