Thumb (top, not heel) as anchor?

I use a technique called “thumb-muting”, where the tip of the thumb is resting on the strings below the one you are picking (when playing the low E string i switch to standard palm muting). 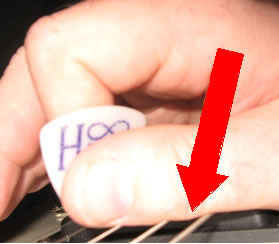 In the pickslanting primer, the only comparable pickers are the Grier Wrist motion types and they always use the heel of the Thumb as the main anchorpoint.
Same is true for wrist pickers like Andy. The thumb is very close to the strings but its not their anchor.

I sometimes wonder if i am in a dead end with this habit.
Can you point me towards an interview or a player who Troy analysed who does the same thing? I d like to find out more about my motions and how to optimize them for the technique but nobody really seems to do this.

Hey @J.P.Amboss, I know you have been around for a long time - but I have done a ton of technique critiques in the part year-ish so apologies if I forgot

Did we already go through our typical critique steps, where you start by showing us your fast tremolo on one string, then we try to figure out what is your currently best motion etc etc? I feel like muting only comes after we established these fundamentals.

Ah yes, the “thumb muting” technique. I used the same technique for a few years, but eventually had to give it up because it wasn’t compatible with the kind of music I wanted to play among other issues.

I found that, while my motion was somewhat DSX, anchoring with my thumb made it hard to get a clean escape on the downstroke, so I felt a bit trapped, especially at higher speeds.

I also found that this motion didn’t work well on the lower register strings since I had no further strings to anchor on, so my picking motion on the low E was super janky. Based on your description, it sounds like you use a different motion entirely at that point.

I also called it my “thumb-muting” technique, so I’m wondering if we both got that name from somewhere, or just came up with it ourselves. Still, I use the motion occasionally (like for sweeping), but it’s not my primary motion anymore.

Hi Tommo! True, i have been on the board for a while, watched almost all of the content and made some progress. I was always hestiant to post something, though, because i basically thought i just need to apply the information i already have and also because i am just not very confident about my playing.
But for the sake of education i am going to leap over my shadow now and post some sloppy clips:

First of all, here is a short tremolo-picked melody which i play using the side of the thumb as an anchor. Nothing else is really anchored exept the top of the thumb.

I know its cell-phone-quality but i think its audible that there are issues especially after stringchanges. For some reason, i sometimes manage to keep playing 16th notes but if you play it at half speed you notice, that there are triplets in some spaces, which i think i instinctively use so i can avoid being trapped. Strangely, in some other instances, i seems to manage to play the 16th notes and use an USX motion somehow. But all in all its a bit of a mess, and as a result i tense up more and more the longer i try and the dynamic and speed changes.

This is the same thing from the front perspective. Same issue here, the picking isnt consistent and there are unintentional triplets thrown in, to help with the stringchanges.

The next one is honestly a bit brutal to me: I wanted to include this as an example that i “can make it work” (the thumb anchor thing) on the lower strings. But watching it in half speed i realise that i am merely more consistent with the triplets here. Before every stringswitch there is a triplet. And here i was thinking i nail that riff…

If you are wondering what happens when i have no string to anchor to - when i play rythm stuff on the low e-string, i switch to a standard wrist anchor point and have some USX motion. Of all the things i play, this feels the most comfy and is clean but for whatever reason, when i try to do this on another string it feels godawful and i switch to my thumb anchor. This is what low e-string stuff looks like:

Lastly, it will get a bit painful but we will make it through together. This is what happens when i attempt to to shreddy stuff.

This mess consists of three things:

As you can see, i use economy/directional picking whenever possible and i also mess up every lick in various ways which would need too long to type out but the most obvious things are:

So this is where i am. I dont expect any magical pills but i apparently really need to change something because what you hear has been my plateau for the last 10 years or so. There are occasional phases when it works out better and i think “yeah i can make this work with another year of practice”, but when i hear recordings like that i suspect that i am fooling myself.

So where do i go from here? I feel like my only options are a) relearning my messed up technique, stop using the thumb as an anchorpoint; b) find some example from a guy who does the directional picking thumb-anchor thing right and learn from them.

Anyway, thanks for reading and for the great content you produce!! Have a great day!

Hey @J.P.Amboss, thanks for the extensive examples and very interesting motions!

Motion-wise, my first impression from the tremolo clip is that your core motion is forearm rotation, however you do it from a fairly unusual setup (which would be more common to elbow players). Nothing wrong with that if it works!

The riffing on the low strings sounds great and looks more like a standard setup for wrist-forearm USX. This should work great for Yngwie and Eric Johnson stuff, and more generally USX-economy stuff so I’d try to do more of that!

The last clip with the scale fragments is a bit puzzling because you seem to do a mishmash of motions, and a mix of alternate and up/down sweeps that causes you to change your hand setup quite drastically in the middle of a phrase.
The upward sweeps in particular are not very common among forearm players, maybe those are responsible for tripping you up?

If you are indeed a wrist-forearm player I would guess that you will make a lot of progress (at least initially) by ditching the upward sweeps and focusing more on the gypsy/EJ/Yngwie system mentioned above.

In any case, your case is very interesting and quite unusual! I’ll double check with Troy if I missed or misinterpreted something

I personally know where i picked up the term. There is a creator of online-guitar lessons who teaches this method exclusively. I took those lessons a decade ago and kinda stuck with the basics of the technique.

How did your transition away from this go? Was it just some weeks of weird feels or where you back to “base1” ? Because flawed as my leadplaying with thumbmuting is, it still feels a million times better than trying to adopt a different position.

There is a creator of online-guitar lessons who teaches this method exclusively.

This is a he-who-should-not-be-named type situation right?

I can give you a more name-able reference in Gambale. His form looks more like this. Lots of thumb scraping along when he sweeps and probably aids in the muting. It’s also there to a lesser extent during alternate, but then he also seems to have a small amount of finger motion in his pure alternate as well so the pick and fingers are lifting away a little.

Obviously in Frank’s case he isn’t doing tons of pure alternate except for those 2nps lines that he likes, and he has those down cold. For more shreddy pure alternate scale type stuff it’s possible his motion would work for that, it’s not in his vocabulary so we don’t really know.

Thanks for the analysis, Tommo!

You are right, i was talking about triplets the whole time, sry this is a translation issue. The german expression for thre notes in one beat is “triolisch” and to me that sounds closer to triads, so i always mix that up.

I will follow your advice and try to apply the gypsy wrist/forarm motion of my rythm stuff to my scalar playing for some weeks. This is going to be a pretty wild experiment for me, because i never really attempted to do anything else than my sweep-picking mishmash. I tried to just incorporate CtC wisdom.
If i could just choose a picking technique in the “guitar-player-selection-screen”, it would def be the Gypsy USX thing, as i am a huge Yngwie fan.

He is even featured in the video. Staring critically from the picture hanging beside the door.

P.S If anybody who picks the same way sees this, reach out to me, we can form a club.

This is a he-who-should-not-be-named type situation right?

I’ll try to keep the drama in where it belongs, though.

You are right, i remember watching this a while ago! I will experiment for some time with changing some basics of my picking, like Tommo suggested, but in the unlikely case that i give up frustrated if i dont become YJM-nr.2 after three weeks, i will definitly do a Gamblae-close reading!

Thanks for taking the time!

You are right, i remember watching this a while ago! I will experiment for some time with changing some basics of my picking, like Tommo suggested, but in the unlikely case that i give up frustrated if i dont become YJM-nr.2 after three weeks, i will definitly do a Gamblae-close reading!

Indeed do not waste too much time on this. If you see that things are not clicking in a few days / weeks, let’s reassess and try a different strategy!