Hello, i have a dean vendetta xm… Realizing now it may have beena mistake… Anyways, the intonation saddle screws are popping out with the pressure of the strings on them… Not sure what to do to fix other than buy a new bridge or chalk the whole thing… I thought lower tuning for less string tension, but they pop out under the slightest pressure… Ruining my intonation… Any suggestions?

Do you have any photos of the bridge? Is it a standard Gibson style bridge? 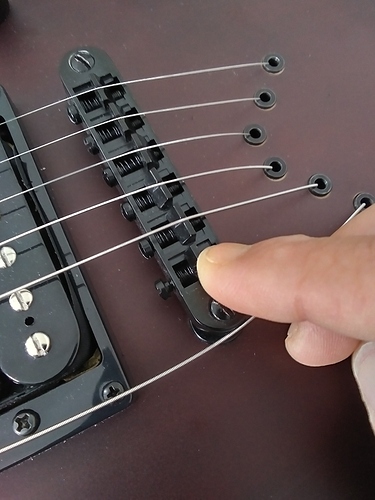 20210510_114552_HDR2448×3264 2.52 MB
I don’t know how well you can see it. But the saddle screw pops out towards the headstock along with the saddle. Screwing up my intonation. I tried lower tunings to maybe relieve the pressure on the saddle but even the slightest pressure pops it out. I don’t know whether there is a quick fix, I tried looking for a bridge, or just chalk the whole thing and buy something else anyway. Any advice or help would be great. It’s doing it for the first three Saddles and somewhat on the 4th. From low-e to high. Slightest amount of pressure and it pops out.
1 Like
Monty May 11, 2021, 1:05pm #4

I looked for a Dean Vendetta XM bridge and they seem few and far between LOL. So I thought either a quick fix or chalk the whole thing and get something better.

Try rotating the bridge 180°, perhaps? (In other words, so the springs on the saddles are facing the string end.)

I will give that a try actually. I mean it sounds like a viable option. Right now I’m at work. But isn’t each saddle cut for each string in particular? I may be wrong about that LOL. But regardless I’ll give that a shot. Thank you for your advice. I’ll let you know the results as soon as I get a chance to do it

But isn’t each saddle cut for each string in particular?

I’m not sure but I don’t think so. The nut, yes, but not the bridge saddles. How did it go?

You may want to check if there is a metal retainer clip fastening the other saddles into place, preventing them from popping up like that. It could be that the low E saddle needs to be secured by that (if it’s in there).

Saddles for TOM style bridges can be notched for the specific strings, so I would take a look at the sizes of the notches before I go switching out the saddles.

I haven’t quite had time to do it yet. My job is very demanding LOL. I have a baby in the house right now. One of my buddies brought his boys over. I did go ahead and rotate the bridge a hundred eighty degrees a minute ago. But he’s leaving with the baby later so I’ll set it up and give it a try and see what it sounds like. Thanks for the advice. I’ll let you know later today how it turns out

As far as I know Dean Vendetta is cheaply made. I didn’t see no retainer Clips on the bridge anywhere. I didn’t switch the Saddles out but I did flip the bridge a hundred eighty degrees. But I haven’t had time to set it up yet. I’ll see what it sounds like like that and if the saddle notches are an issue maybe I can switch out the entire Saddles down the line

Small update. I flipped the bridge and it seemed to work out nicely so far. I just did a quick eyeball setup. I need to adjust relief and Action a little bit more. The Saddles do appear to be made of a malleable type of metal. So where the low E saddle is now down at the high e, there is a big Groove in it. With ridges from the string winding. I got torch tip cleaners that I could smooth it out, but would steel wool be good to polish it with? Sort of the only things I have on shorthand LOL.

Why not reverse the saddles too, so the groove sizes match the strings?

Either way, cleaning them up is a good idea. If you have a little bit of sandpaper, you could wrap it around a string and give it a few scrapes to smooth the ridges out. Otherwise I guess I’d go for the torch tip cleaners before the steel wool. Seems a little more precise.

Edit: Was your relief already in need of adjustment? If not, you shouldn’t need to mess with it. Just set the action and intonation. The action should be pretty close already unless you moved the height adjusters when you pulled the bridge off.

Right after I posted that update I thought the exact same thing LOL. So before the strings were on the saddles long enough to do any damage, I’ve loosened them and took them off the saddles. That thought occurred to me too, why don’t I just switch the saddles? LOL. So that will be today’s mission LOL. To reposition the Saddles accordingly LOL. Thank you all so much for your help. I think this is going to do the trick. I hate that I had to do it at all. Seems like I shouldn’t have had to.

The bridge in this photo definitely looks backwards. The ‘weight’ of the string tension should be carried by the head of the screw, and the springs are there to keep the saddles in place while adjusting with no tension. So the screw heads should be facing the string inlet holes. There also seems to be tapers on the saddles, with 3 facing one way, and 3 the other, which is weird. It might be the camera angle, but I’d think you’d want the taper facing the string inlet holes and the flat facing the fretboard. Probably not a big deal, but it might effect tuning stability, since the string can more easily slide over the taper.

Stewmac disagrees about the screw direction:

The intonation adjustment screws on a Tune-o-matic bridge should face the neck and pickups, not the tailpiece. If they’re reversed, the adjustment screw heads may interfere with the strings coming off the saddles. When this happens, it alters the string angle and can cause rattling or other problems.

In practice, as long as the tailpiece side of the string doesn’t touch the screws, it really shouldn’t matter. The saddles should be able to withstand the lateral force of the string tension on the saddle. Usually there’s some kind of clip on the inside or outside of the bridge that prevents them popping out. It may be missing or deformed in this case. FWIW, the pictures I’ve seen from Dean show the screws on the neck side.

The ramp on the saddles should face the tailpiece so that the intonation and tone aren’t affected by the vibrating string touching the saddle along its length. Tuning stability doesn’t play a part here because the strings should be free to slide in either direction, toward the neck or toward the tailpiece. Sometimes people intentionally reverse the saddles if they run out of range for intonation. By reversing the saddle you can add a a few extra mm to the speaking length if necessary.

The real problem here is probably a missing internal clip and/or, similar to so many other problems caused by cheap bridges and tuning machines, that the bridge and saddles are almost certainly made of pot-metal, which is too easily deformable for sustained use in this application, leading to stripped screw holes and rough notches.

Monty, you can probably get away with what you’re doing already (reversing the bridge). Whenever you change your strings, double-check your notches and clean them up if necessary.

I appreciate everyone’s advice. I might need to explain it a little better lol. I’m going to attempt to make a small video in try to upload it. That way I can show you all what’s happening. Because you are correct the heads of the screws should face the neck and Pickups. But there’s an issue with that. In the saddles on the top three strings have to face the bevel towards the string eyelets on the body. Because if you think about it you tighten the string and it goes forward towards the neck. If the bevel was just like the 3 bottom strings, the string winding would grind the hell out of the saddle more than it already does. But actually I have to take the Saddles off and put the springs on the opposite side because I can’t reach into Nation with it in the way. When I do that I’ll try to make a video and explain what’s happening. I get that the heads of the screws might affect the string coming off the saddles at the string eyelet side but with this issue I have no other choice. The screws are not stripped, but it’s so cheaply made there’s nothing keeping them in place except the saddle. No retainer clips. Nothing like that. I think I’m just going to try to do what I’m doing now, and maybe upgrade to a Jackson or something. I don’t like this Dean configuration. Atleast on the Vendetta

In the saddles on the top three strings have to face the bevel towards the string eyelets on the body. Because if you think about it you tighten the string and it goes forward towards the neck. If the bevel was just like the 3 bottom strings, the string winding would grind the hell out of the saddle more than it already does.

Ideally it shouldn’t grind in either direction. Otherwise it would grind them just as hard when you loosen the strings. That’s not what that bevel is for.

But it sounds like you have a handle on it, and I don’t mean to be pedantic. I look forward to your video.

Fascinating. I only have one guitar with a tune-o-matic bridge, and the screws face the tail piece. Might have done that myself, but they aren’t even remotely close to interfering with the strings. The saddles are flipped between the bottom and top 3 strings, which surprised me, but it sounds like it doesn’t make a huge difference. I guess I got a bit confused by the springs, my understanding was that the screws are typically held in place so that they don’t move when rotating, figured that the springs were added because nothing was holding them in place. Thanks for the insights.

I tried to make a video and post it but apparently can’t do that. LOL