In my case, I think the answer is a resounding CHUMP!

How badly I long to be able to tremolo pick!
I do other things relatively well and it’s really frustrating that I’m so weak in this particular area.

In this refreshingly brief video you will see:

Example 1 -
This is how I’ve been tremolo picking for years. I can sort of get the job done this way but I’m not by any means proud of it. Maybe this is sort of related to the MAB approach? I only recently found out about him but was interested to see someone else with the weird wrist flexion.
This is about the max speed I can get out of this, and changing strings is pretty hard to do.
I’d love to find a better way.

I’ve been thinking that a more closed fist approach with less anchoring might serve me better…mostly because I see a lot of people do it that way. Which leads me to:

Example 2–
This is me trying to use the new technique. As you can see/hear it sounds terrible (unless you like 95% pick noise and chirp) and also I can’t do it very well at all. I’m sort of anchoring myself with the side of my thumb against the low E string. I feel like I need to anchor somewhere but that’s about the only place I can contact the guitar and still be able to move. It’s not comfortable for my thumb either.
Is there anything at all about this technique that’s worth working on? Or what else can I try?

Here’s the video containing both examples:

Hi! Thanks for posting, and thanks for signing up for our stuff. Good eye on the wrist flexion example — you are not only using a “flexed” wrist as your posture, but the actual picking motion itself is also wrist flexion and extension. The second example looks like you’re shooting for elbow motion, is that the case?

In general, I would resist thinking of “tremolo picking” as a motion. It’s a musical technique, but the motions you use for it can be used for any other kind of picking. Is there some other picking motion you use when you’re not doing tremolo and what does that look like? Or is the same motion, just slower?

Of these two examples, the first one sounds the smoothest. In the second one, you’re not fully leaving the string, which is why the notes sound a little chopped off. This is partly because you’re using so much edge picking that the pick almost entirely fills the gap between the strings. Your approach angle is super high, like 90 degrees, so the pick is basically coming in perpendicular.

I’d keep experimenting with the second motion, but I’d do it sitting down with a lower approach angle, as we describe in this checklist: 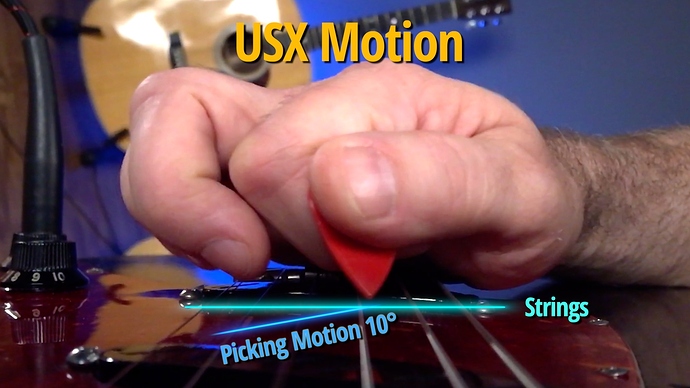 Let’s run through a quick checklist of all the moving parts so you can be sure your setup is the right one for this important first lesson on wrist motion. Do you have an average, non-injured range of motion in your wrist? Can you can knock on a door...

This is about wrist motion, but the approach angle concepts are similar. This will give you much less edge picking, so you’ll have more “room” in between the strings and you won’t be hitting the string and cutting off the sound unintentionally.

The second issue in both of these examples is guitar shake. That usually happens when you involve other muscles or motions unintentionally, like upper arm or shoulder movement. Being more aware that this is happening is the first step. But I don’t like to think about “stopping” unintended motion. Instead, I like to think about zeroing in better on the motion I want, seeing if I can tell by feel when I’m doing that motion and only that motion, and leaving the other joints relaxed. In other words, I want to “do” the good motion, not “stop” the bad one. Repeated attempts maybe filming yourself to see if just the joint you want is moving. But the key is feel. You have to be able to learn what that target motion feels like when only that motion is activated, because you won’t always have a mirror or video to consult with. And those things can become a crutch if you use them too much, to the extent that you can only do the technique while looking in a mirror.

Another thing you can try is working on some of the motions we just uploaded this weeked in the new tutorials on forearm motion. We tried to provide lots of details on positioning and grip there, so that you are as close as possible to where you need to be. There are some good visual references in there to what the motions should look like when you get them, and I’ve tried to give you as much of a sense of what they feel like as well.

So experimentation is the name of the game here. Thanks for posting and keep us updated!

Hey Troy, thanks for the amazingly quick and equally amazingly detailed reply:)

I know you suggested that people watch the entire Primer before posting, but I couldn’t help myself…sorry.
So far I’ve only gotten through the wrist motion chapters, but I’m kinda blazing through the videos as often as I can. I really appreciate the detailed exposé of all the different pick grips and techniques etc.
I can tell you one particular thing I learned here that I would never have figured out on my own—for players like myself who have a supinated arm position, holding the pick with your second finger brings the pick closer to the strings and feels more comfortable. I don’t play like that because early on someone probably told me it was wrong- but I always knew that Eddie holds his pick that way, and now I know at least two good reasons why. I can’t immediately play well with that grip, but it definitely does feel comfortable.

Anyway, in answer to your question – I do use this same flexed wrist position for other stuff when I need to play fast and precise. I’m sure it’s limiting in some way, but it’s what I got good at somehow. I never intentionally planned on playing that way, but I just looked at myself one day and noticed that’s what I do. So I guess it’s what my hand does most naturally. I can actually do the Paul Gilbert lick kinda decently using this technique, as shown here:

…although slowed down, the rhythm is shockingly erratic.

For more normal, slower type of playing, I use a more conventional technique…pretty supinated like Steve Morse but with a regular pad-angle grip and my other fingers just flapping around. Nothing weird looking, just standard alternate picking that’s not terribly efficient but gets the job done. Looking forward to dialing that in now with the help of the Primer!

Thanks again for all this awesome content you have here. Your playing is phenomenal, and being able to watch it in slo-mo with all the detailed narration is every bit as inspiring as all the great concerts that I went to as a kid…standing in the front row just a few feet away from Yngwie or Schenker etc.

Cool clip! Thanks for filming that. It looks like you’re doing a downstroke escape motion there, with the flexed wrist orientation. Which is interesting, I don’t think we’ve seen that particular combination in people we’ve filmed. Michael Angelo Batio is a downstroke escape player with a flexed orientation but we’re still not 100% sure what the motion is. Could be similar to yours, or perhaps elbow.

I also think you’re swiping the upstroke, meaning, hitting the lower string on the way over it. I don’t have a problem with that per se as long as it sounds good. The rhythmic pause when going back to the upper string is of more concern. It’s not erratic rhythm, it’s just that one particular spot — same spot every repetition.

As you try out more options, try not to think of yourself as a “naturally supinated player” if only for psychological reasons. You probably just play that way because that’s what you learned, and not likely for any other immutable reason. I’m sure you can straighten out your wrist and play just fine with less supination too if you like. And doing so may give you some ideas about how to make more flexed arrangements work better as well, if you like. Learning to feel what particular motions feel like when done right is the entire name of the game in smoothing them out, cleaning them up, and making them permanent over time.

Again, the forearm-wrist family of motions might be a good place to start because there are aspects that may feel familiar in terms of the arm position. Amd that will give you some good experience trying out a straighter wrist orientation, getting the bridge anchor happening, and having access to muting when you want it.