I don’t think this dreaded sequence needs much of an introduction.

Shawn Lane did it with a mix of legato and picking, MAB did it with pure picking, Yngwie and Paul Gilbert did it with legato/sweeping and legato/alternate picking (respectively).

How do you play it? Is anyone here super efficient with this with pure alternate picking? The hit rate for this sequence seems super low in general and it seems many people avoid it because it instantly sounds awful if you get it wrong. Like a car crash as Troy said in Antigravity, just an absolute mess.

NB: I’m talking about the above version with no MAB-style five note pickup. Just the raw, unfiltered classical sequence that many people claim is “overused” but that literally no one seems to be able to play.

Unlisted Rusty Cooley version that Troy shared a ways back 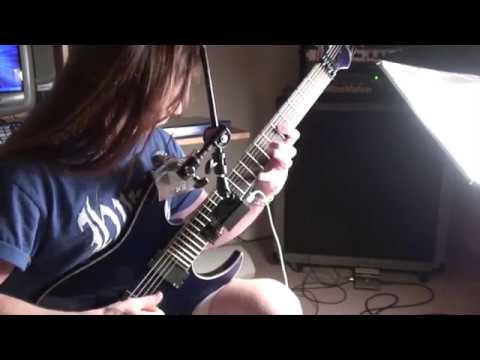 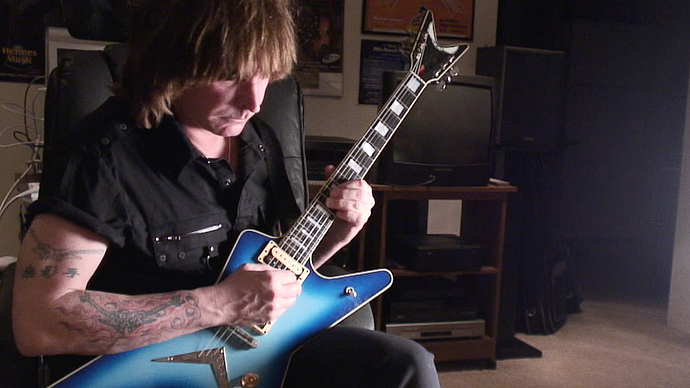 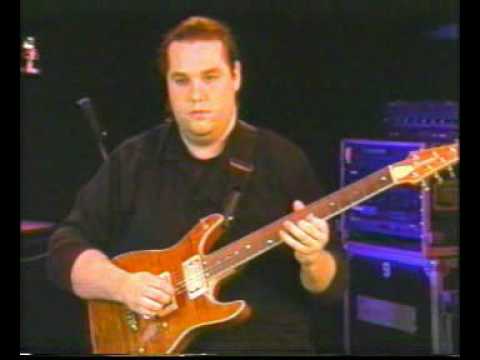 The tab book for Power Licks says he starts it on an upstroke and alternates from there, but I’m not sure that’s correct: 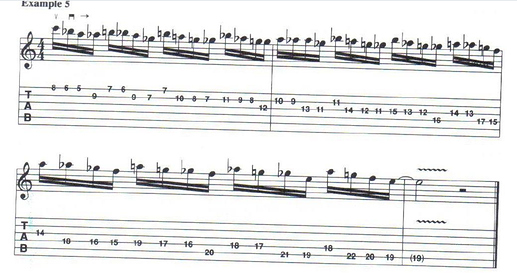 This looks cool, I can give it a shot later!

We have this in the EVH lesson / Instagram update:

This is 200bpm, and I’m starting on a downstroke so this is what I sometimes think of the “inside” version of the line. In reality it’s both inside and outside picking, but what I mean is that when you descend starting on a downstroke, the moment when you have one note on a string is always inside picking. This is the pickier of the two ways of doing it because you’re more likely to feel it if you get stuck in the strings.

Among players we’ve filmed, Michael Angelo Batio is the boss at this. All the notes are picked here, and it’s the “inside” version again: 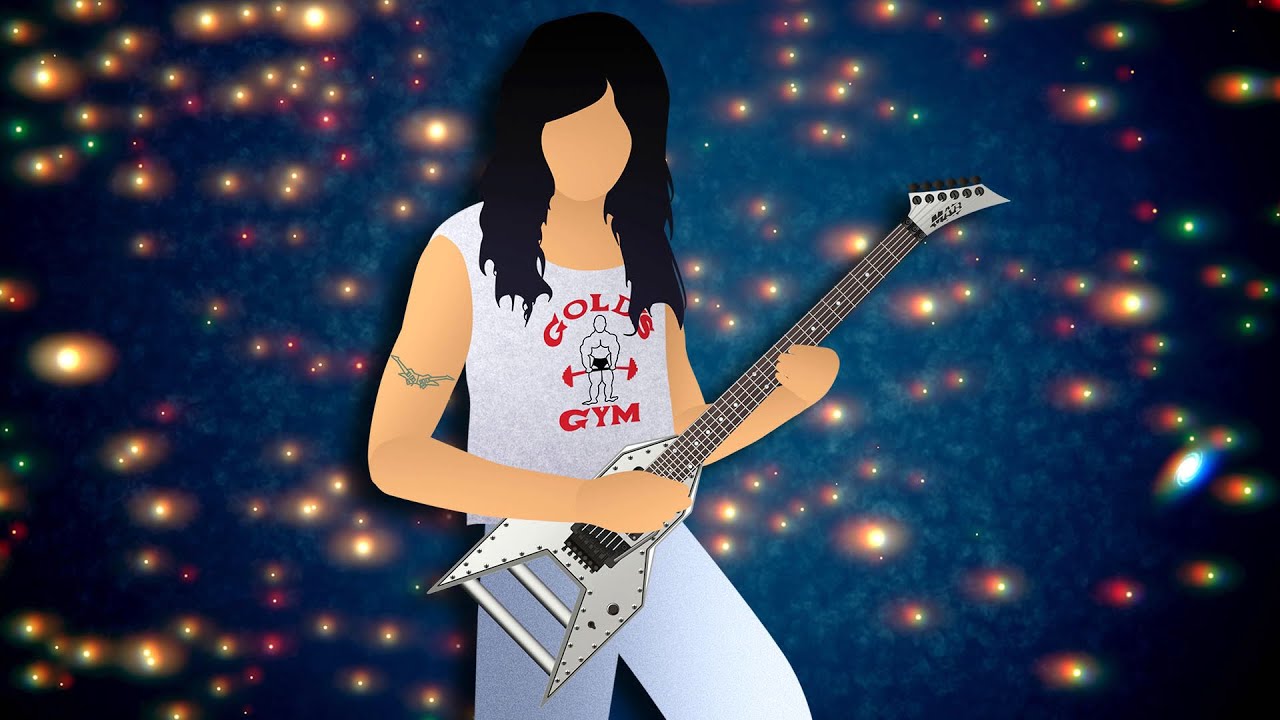 I would note that Shawn Lane doesn’t appear to have played this phrase literally. I know he demonstrates it as such slowly, but when he speeds up he leaves out a note in the first repetition so it’s only three notes. As usual, it’s his own off-kilter version with mixes of odds and evens, and that sounds cool. That’s his sound.

Thank you Troy, very helpful to see you play that. I remember reading that about the Lane version (I think it was a discussion between you and Tom).

So if I’m understanding this correctly, the asc and desc fours are best started on a downstroke for the traditional every-pickstroke-in-its-place version, but started on an upstroke for a swiping sound?

The reason I ask is that in the Antigravity seminar you mention that Batio’s circular fours is reliant upon swiping for descending outside string changes. If we take away the five-note pickup, it’s ostensibly descending fours on an upstroke for that pattern.

It’s a little different in that the circular fours chunked in groups of sixteenth notes doesn’t match with the descending fours exactly, because the meter shifts in the brain just slightly with the addition of the five-note pickup to the desc. fours (see below, hope I’m making myself clear here it’s a little confusing): 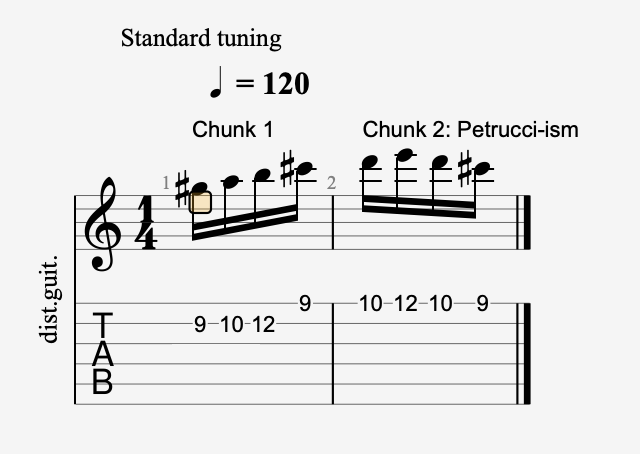 So I’m assuming that’s why Batio starts on a downstroke for his circular fours.

When Mike plays it descending he uses swiping. He just uses one picking motion for the whole thing and doesn’t change it. So some pickstrokes will collide. It’s super not noticeable, especially if you get your left hand muting down.

You can sometimes hear the swiping on the descending version, but even then it’s very precise, only occuring on certain notes. Here’s an acoustic version of the descending / swiping approach, see if you can hear the little “clicks” when he swipes: 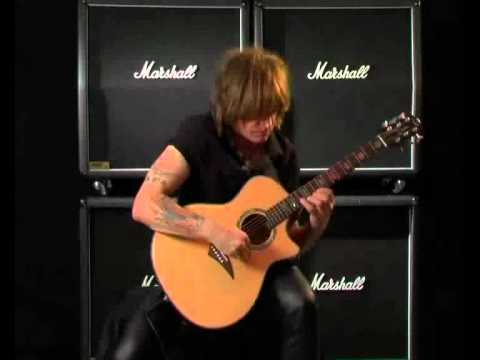 When Mike plays it ascending, he starts on an upstroke, which is the inside version, and doesn’t swipe. It’s technically “cleaner” but in reality he sounds awesome both ways.

In general, I think the best way to approach this phrase with any kind of alternate picking is try to get it fast and smooth first without thinking too much about the picking motion involved, and without trying to “do” anything specific to get over the strings. As Mike’s approaches show us, even if you just had one simple picking motion at your disposal, and it was fast and smooth, and your hand synchronization was good, you would at most have two tiny noises in every 12-note (one string pair) iteration of the pattern, and it just wouldn’t be that audible.

If you can at least get the pure alternate motion to be fast and smooth, even if you hear some small noise in there, you can always slow down and try to fix that. But if you can’t get that far at first, then fussing over complicated motions is only slowing down your progress.

When Mike plays it ascending, he starts on an upstroke, which is the inside version, and doesn’t swipe. It’s technically “cleaner” but in reality he sounds awesome both ways.

Interesting. So he switched during the interview for this take to a downstroke? I’m not sure I follow here. Does he arbitrarily change things without knowing? 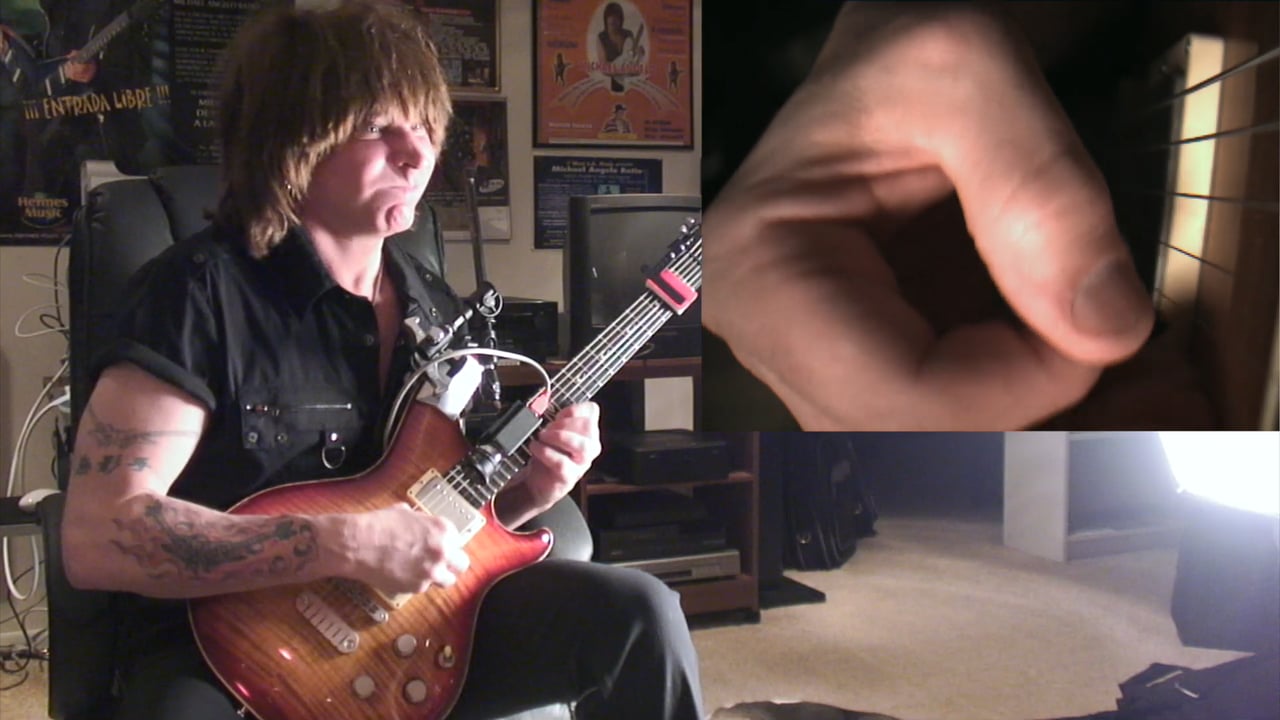 About 5 minute warm-up, don’t think I’ve done anything fretting wise that seems similar, so the “middle” pattern might feel the hardest? Also doubling up the start and end note is a bit trippy. I’ll post again when I’m warmer and feel the accents better.

Is this what you had in mind, or did you want like a full scale across multiple strings / positions?

Nah, just the chunk I posted. Full scale is unnecessary because once you get the two string version you have the rest.

That looks good and sounds good. Seems like you’re starting on a downstroke? For me that feels easier.

How about upstroke? My hand tenses up when I try that version.

Yeah downstroke, I can only imagine that there’s no way I can start on an upstroke, I never do that lol.

Check out the tablature, all the pickstrokes are notated. Each grouping of fours starts on an upstroke. There is a five-note sequence at the beginning of the lick as a pickup which is what is confusing you.

Does he arbitrarily change things without knowing?

It’s not arbitrary, per se. These phrases are completely memorized and he plays them the same way every time. This is the way most fast technique works. He has memorized the ascending one as the “inside” version where he starts on an upstroke. And the descending one is the “outside” version and he uses swiping.

Check out the tablature, all the pickstrokes are notated. Each grouping of fours starts on an upstroke. There is a five-note sequence at the beginning of the lick as a pickup which is what is confusing you.

Lol, my mistake. Completely missed that one. All set now, thanks.

I think I remember one of the old Batio improv blog posts where you mentioned the difficulty of notating the phrases because the bars bleed together. I’m guessing this has something to do with that?

In the 5 mins of trying I can get the descending to what sounds like upwards of 160.
I have a pinched nerve in the neck so my fretting hand is a bit sloppy therefore changed the notes to make it more comfortable.
I don’t think I ever play ascending 4s so my fretting hand isn’t playing the game. When I’m match-fit again I’ll see if I can incorporate that. I might be swiping, I might airball some of the notes, but this sequence is a killer! 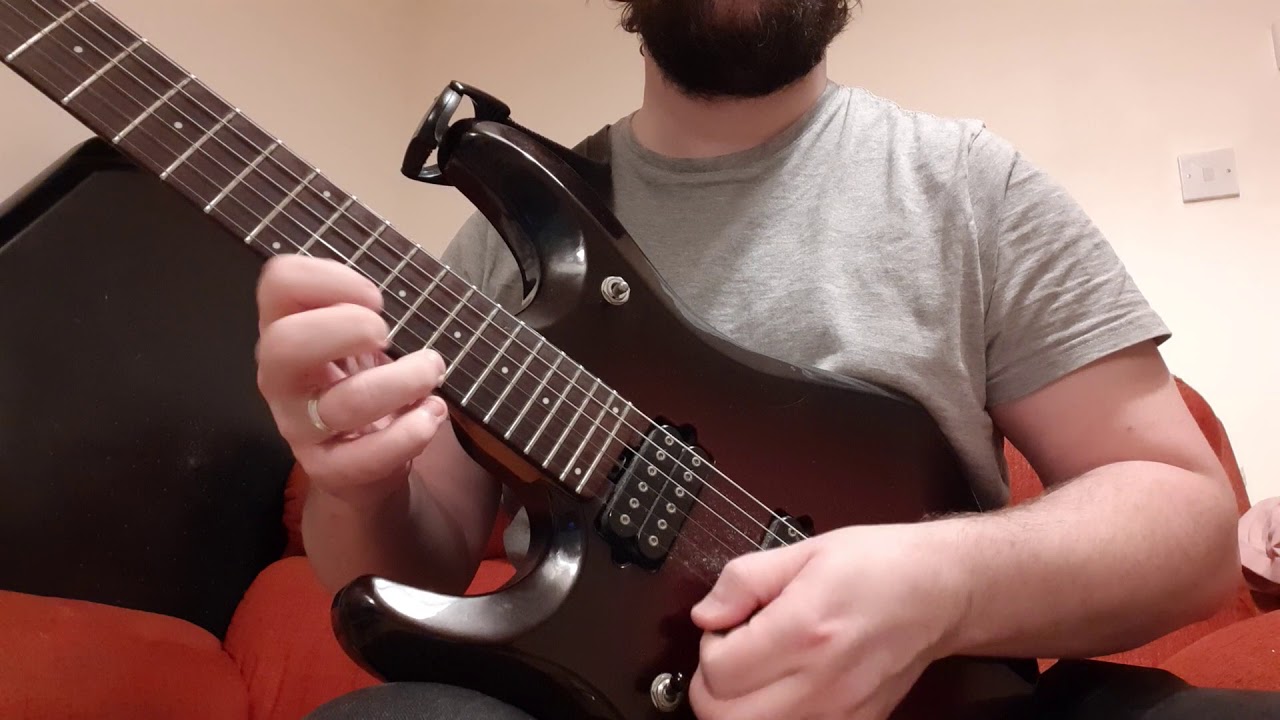 This sounds great. If there are errors, they’re small in relation to the big picture of smoothness, synchronization, speed, etc. This is a great starting point. 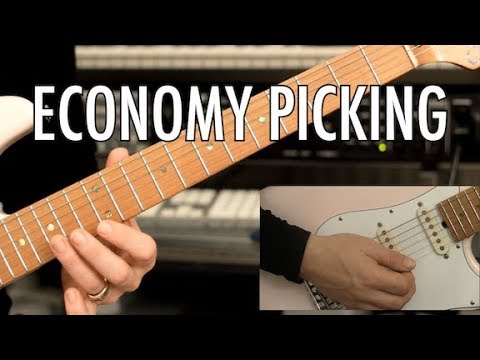 Rick is such a beast! Almost makes me angry!

I took another attempt and ‘gunned it’ after some practice seeing as my fretting hand seemed more awake today! A step above yesterday I think, bit hand synch issues are more audible. 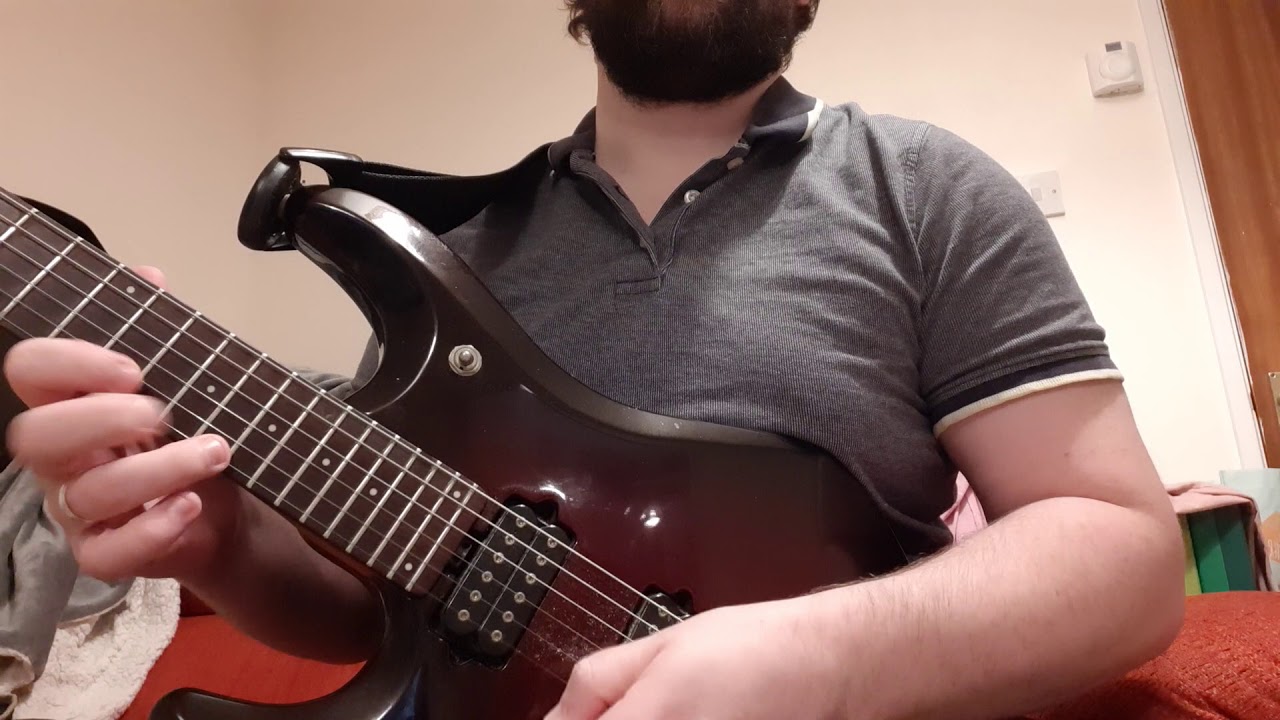 Trying to up the speed and clean it up, sorry for the horror movie background noise lol.

Seeing you play your JPM makes me want to set mine up and play it! Great feeling guitar.

Fiendish! Do still find the repeated top note off-putting? I had a go earlier and got some really good ones that were pushing my limit, but this feels like such twister for my fretting hand as well as my picking… aaaaaggh!

It was off-putting at first, but not as bad as the “feel” of the second pattern. It helped me to chunk from downpick to downpick on the beat. When I was going slower I would do 5 notes, then 9 notes, then finally 13 (which would have the doubled note). When I sped up I omitted the 5 note chunk and just did 9 and 13.

I posted this in another 4s thread:

The sole note on the first string that starts the 3rd set of four notes is the problem, at least for me. I have to either change pick slant to catch this note or precede it with a pulloff on the second string that give the pick time to loop around for the requisite upstroke, both of which “breaks the rule”. I played around with eliminating that note and this is what I came up with. It shifts up to the problem note on the second string and the cycle repeats. It preserves DWP and, oddly, moves up the neck as it descends (and vice versa). 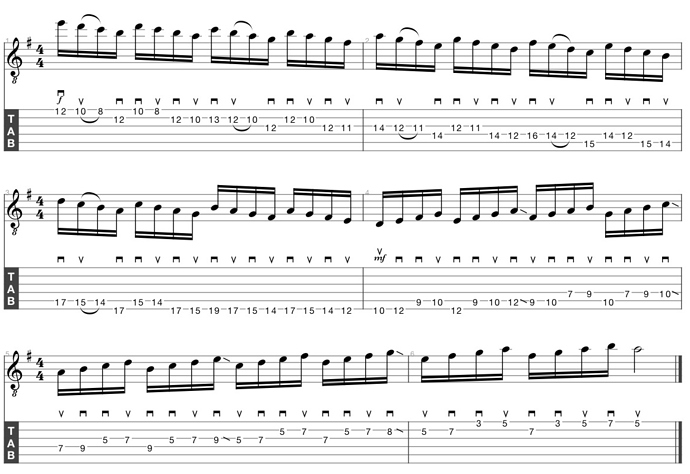