Up, down, all around - picking in a nutshell

If we were to summarize, it seems that the bulk of investigation and insight on this amazing website breaks down into four areas: DWPS, UWPS, 2WPS and 2BX (by that last one I mean double escape; got the right acronym…?)

Is it also fair to say that the majority of elite players in the interview section (and, I’d speculate, in the larger world of professional guitar) are specializing in one, perhaps two, of these methods (though a session player like Andy Wood has high-level competency in all four)?

[I’m going somewhere with this, but with your help I need first to establish that I’ve got my bearings in terms of the birdseye view…]

The CtC team have tried to move away from “pickslanting” as being the object of attention, instead shifting focus to types of escaping strokes and the movements which generate them.

So, for example, “Downward Pickslanting (DWPS)” has been supplanted by the concept of “Upstroke Escape (USX)”.

Also, the idea of “2-Way Pickslanting” has been largely supplanted by the ideas of studying the movements which generate 2-way escapes. The original idea the team had about a single movement operating in particular plane, and then the rotation of that plane to generate the escape just isn’t really how it’s done by most players.

Also, the idea of counting “2-way escaping” or whatever the team want to call it now seems like double-counting to me. It would seem to me that it would more naturally be thought of as being able to do escaping upstrokes and escaping downstrokes, and having some facility to change between them or use them in combination.

As for a double-escape abbreviation, I’ve been using DBX, though I don’t know how correct that is as of present terminology.

I hear. I’m all for precise wording. But it still boils down to four escapes (down, up, two-way [mostly down or mostly up], and double). So are we saying that most of the interview subjects can be described as sticking with one or maybe two of these…?

I guess if you think all of Chemistry is just people talking about the periodic table, then sure! But you still have to combine those things into other things that are useful, and then learn how they work. And a million other details.

Yes we’ve been using DBX motion for “double escape”. We actually started using the term because people on the forum started using it. So path of least resistance: 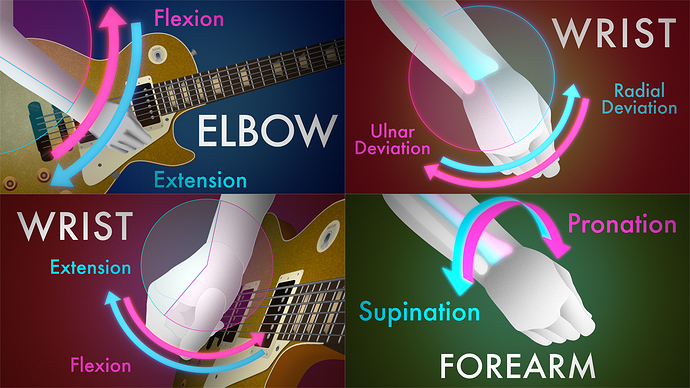 Picking motion is the core of your technique, and it’s the sum of a number of different moving parts. In this section, we’ll learn how to recognize these motions and understand the differences between them. In Core Concepts, we cover fundamentals...

In fact, the best way may be to not think of it at all, and just try to make a motion that feels smooth. It seems clear that’s what most of the players we’ve interviewed did, who largely got there by feel.

Re: using different motions, this is very common. Eddie Van Halen has like four picking techniques. He’s great at everything. And some of them are the same type of escape motion, just done with different physical joint motions.

David Grier and Molly Tuttle can both play entire phrases without touching the guitar at all except for a forearm anchor on the body. No bridge, no finger anchor, nothing. And these motions aren’t even the ones they’re really known for.