Here’s an interesting example of fast picking from Eddie…still a nice exercise. My friend Bill gave me his take on what he believes are the picking directions that Eddie likely used based on reviewing video footage of Eddie playing this lick. Took me a while to get it down and it still takes a good deal of warm-up for me to play this one to speed, but I love it.

Here is a clip of me playing the entire solo with some other riffs from the song which include this little guitar/drum duet:

Video not playing back for me? Maybe incorrect link or set to “private” or something.

I think I have it fixed now…

This is another example of DWPS from Eddie…also another example of him picking every note at fast speeds. Most people assume that Eddie never picked all notes in a given fast sequence…He does most often use Clapton licks and their attendant picking directions, and he does mix picked notes with hammers and pulls…in this solo (which I think has a lot of Holdsworth influence with the long legato passages) he does a lot of hammers and pulls, but that killer guitar/drum riff is damn fast and clean picking! Maybe it’s not Yngwie or Gilbert, but as close as Eddie gets!

Seriously?! I always thought this started on a down stroke as it’s the perfect set up for pure alternate downward pick slanting, I’d figured that was probably how Eddie had come up with it. Didn’t realise there was an economy string change in there. Oh well… lolz…

Yep, you can see him use this pattern live on the US Festival footage and on the many clips of him playing it on the relatively recent Roth reunion tours.

Hmm. I don’t trust my judgement on watching people’s picking movements that much but this really looks like a downstroke start to me:

You are a master! I just play this riff with legato and by feeling, not playing it rhythmically accurate with sextuplets.

Hmm. I don’t trust my judgement on watching people’s picking movements that much but this really looks like a downstroke start to me:

Slowed down to 0.25x on YouTube’s full site… I gotta agree, that looks like a downstroke to me, too.

Yeah, it looks like there’s only two sets of six pick strokes each bar for thirteen notes so I suspect either the second or third note of each bar is a hammer on. Also it looks to me like each note that ends the bar and each seventh note is clearing the strings on an upstroke so I think there may be swiping going on to start each next string with an upstroke. Not a chance of me hearing the swiping click if it’s there though.

Yeah, it looks like there’s only two sets of six pick strokes each bar for thirteen notes so I suspect either the second or third note of each bar is a hammer on.

I was actually wondering that, too, if the second note in the pattern was hammered on rather than picked, but I couldn’t be sure. If he IS hitting the second note with an upstroke, it’s comparatively subtle - the downstrokes are very pronounced, especially on the low E, whereas the upstrokes are not.

It’s awfully tough to tell, though - it’s grainy, zoomed-in cell phone footage, and there’s a TON of natural reverb from the stadium, and the whole thing seems to be distorting the camera mic.

This video shows the escaping upstrokes a lot better when Eddie turns towards the camera just after 3:29:

Still not great quality but watch it at 0.75x speed and it certainly looks like the upstrokes are sounding the last note.

It’d be nice to see footage of this song from the first time round, I know there’s at least one video of this song but it’s not great for viewing Eddie’s playing. Wonder if there’s any sat in a vault somewhere?

Seriously?! I always thought this started on a down stroke as it’s the perfect set up for pure alternate downward pick slanting, I’d figured that was probably how Eddie had come up with it. Didn’t realise there was an economy string change in there. Oh well… lolz…

I love this song, always have. The solo is one of my favorite of his, and he really does a great job on it live here. I never knew how he did that upper fret lick. I see it’s a wide stretch thingy like in “Beat It”. I’d almost prefer not to know.

Anyway, the truth about the scale part is that it’s just a vanilla ascending six-note scale fragment, straight up the scale. He sometimes plays it with strict alternate, starting on a downstroke, i.e. dud-udu. You’ll see that in the upper octave in the first YT clip.

But in a couple cases here, he goes down-hammer-hammer, and then does dudu on the next string even though he’s fretting only three notes on that string. In other words, the pickstrokes do not line up specifically with any particular fretted note. He wants to do those four fast picking movements on the string, ending on the upstroke, because that’s how he feels it, so he just puts another pickstroke in there. Maybe certain pickstrokes line up in certain takes, and others in other takes. It varies. We’ve seen this in players we have filmed. It’s a thing people do, again mostly by feel. It is what it is: four pickstrokes on a string without a specific connection to the fretted notes.

If you want to practice dhh-dudu with synchronization, you can write plenty of phrases that will fit that, picked note for fretted note. Or you could even modify this song to add in a passing tone and make it match up. That’s up to you.

In my opinion, he picked all of the notes of the synchronized riff on the ‘1984’ recording and on the live versions from the US Festival. There might be instances on the later reunion tours where he gave himself a break and didn’t pick all the notes and did the Down-Hammer-Hammer thing, but I don’t think that was how he generally intended to play that riff. As I look at the above clips from the reunion tours, I see an Upstroke for the first note and as near as I can tell and in my opinion he plays the riff with the pickstrokes that I have indicated.

Here is my transcription of the whole solo from the album as I play it in the clip I posted above: 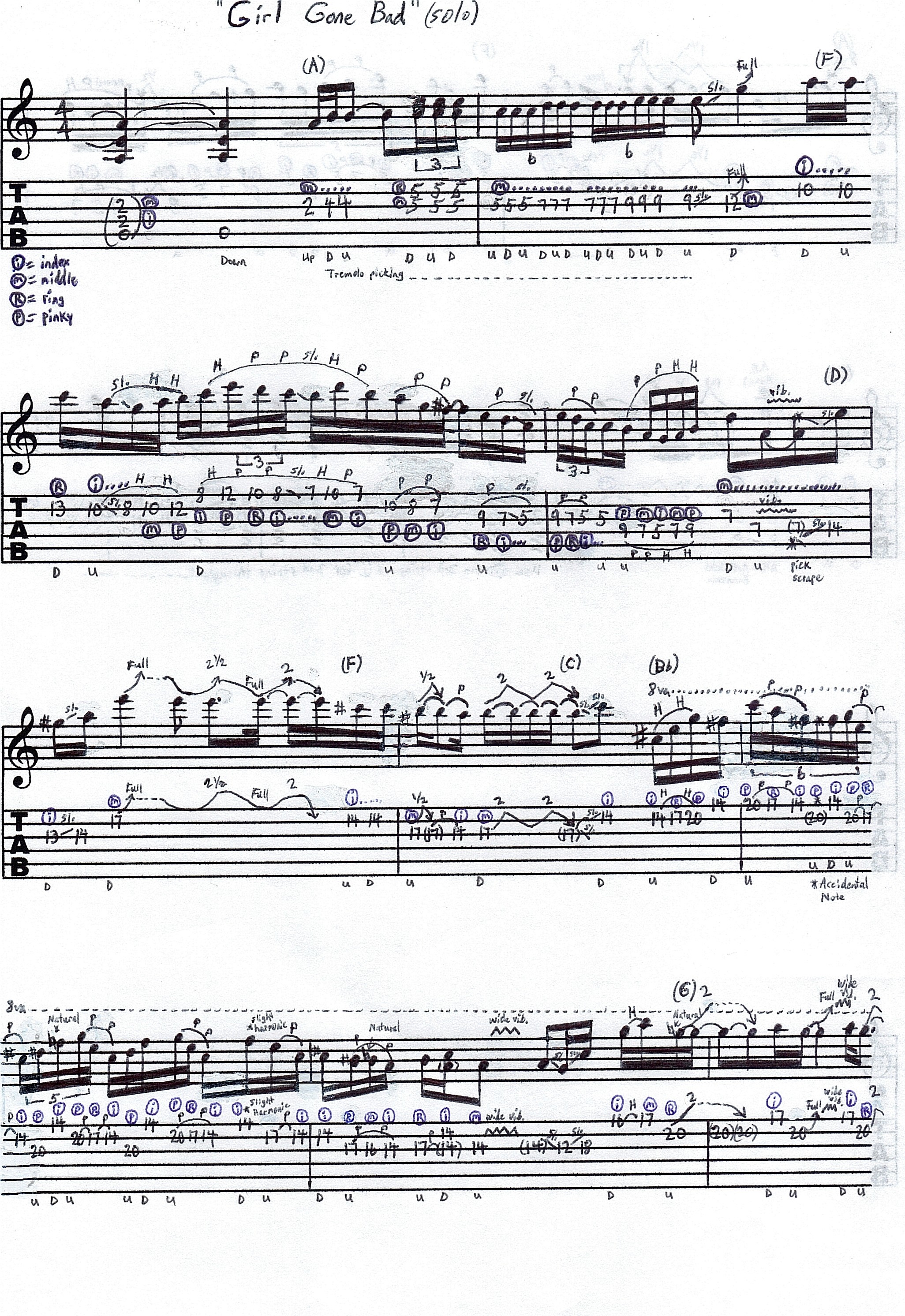 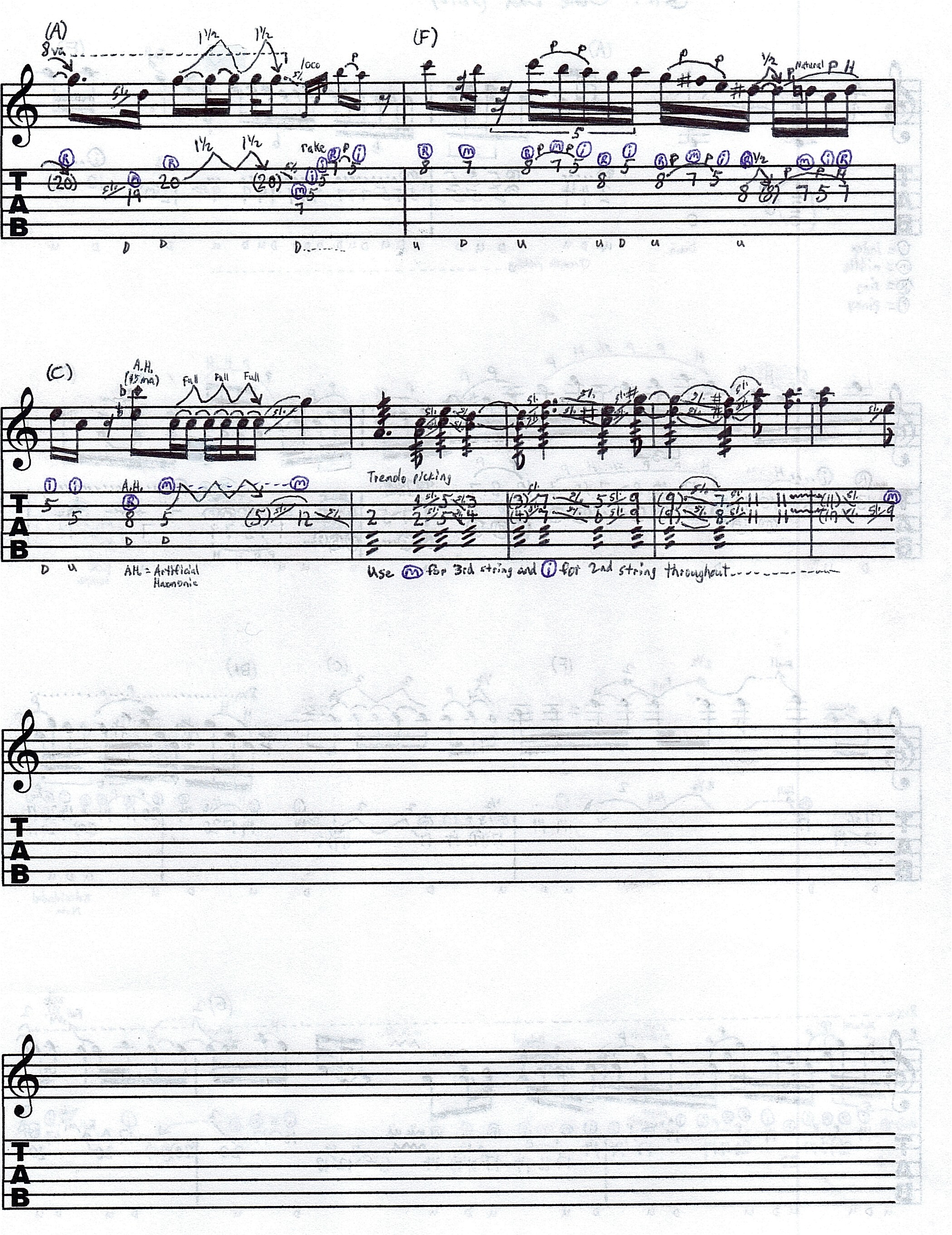 I just realised!!! You’re the guy on the Metropoulos who figured out Eddie’s tuning offsets! I have no idea how you did that, but you are a genius dude.

Here’s a clip where Eddie is playing the lead parts really well…especially for the latter stages of his career. This was after his wrist surgery and the difference is night and day:

Also, here is a link to a thread on the MetroAmp forum where my friend Bill breaks down the picking on several licks in the solo and he points out the Clapton picking…VERY helpful in understanding how Eddie actually played things.
http://forum.metropoulos.net/viewtopic.php?f=49&t=44277&sid=272e63e16328b3a4c8b747296127e9ca

I just love that lick…mostly because it shows Ed’s facility with alternate picking like he demonstrated in the Steven Rosen interview, but also because it is a great exercise. It goes against what the overwhelming majority of transcribers and players assume about Ed…i.e. that he doesn’t pick every note fast and clean. He does do so on occasion!

I start it on a downstroke so the 4 notes on the string leave you with an upstroke at the end facilitating a clean string change. Where you have:
UDUD-DUDUDU-DUD
in your first post it then becomes:
DUDU-DUDUDU-DUD.
This was why I thought it was strict alternate picking starting on a downstroke as it gives an equal number of notes per string for efficient alternate picking string changes. Those 4 notes on string are really helpful for this sort of thing.

That makes sense…the nice thing about starting with an Upstroke is that I basically can swipe with two Downstrokes as I switch from the low E to the A and from the A to D. There is a certain sound and feel that I can get from this that feels right to me. But as Troy says, it is of little consequence if it works well for any given player with either choice

Not sure if it’s a mistype there or confusion about terminology. You mean a sweep for the two down strokes? A swipe would result in a down then upstroke where the down would play two strings at the same time the second string being ‘dead’. Apologies for being pedantic if you did just mistype but it clarifies it for anyone who doesn’t understand the terminology. Troy explains it here:

Here’s a slow-motion version of the 2012 Chicago clip. The audio sync was off, which is common on fan-filmed footage so I adjusted a few frames so everything lines up:

This sounds like six notes, straight up the scale to me. We don’t really have the angle to determine completely what’s going on picking-wise, but there are six hand movements, not seven. Whether one of those is legato with the hand going over the top of the string, it’s possible, since we’ve seen it from other angles.

My guess with this lick, from all the clips that have been posted, is that Eddie simply intends to play these as six-note scale fragments with no repeated notes. Sometimes he throws in legato, sometimes maybe he doesn’t. Sometimes some notes get doubled because he displaced a pickstroke to the higher string. (It’s a thing - ‘displacement’. That’s what I call it!) Sometimes they don’t. It is what it is. Either we’re imagining things or what’s happening is exactly what’s happening.

To be ultra clear, I think Ed has great picking technique. I don’t care that there is some slight variation here and there when it comes to DiMeola-style scale playing. He always sounds great. Nobody can listen to “Spanish Fly” on the album, with its aggression and snap and clarity, and think otherwise. or “Hang 'Em High”. Or the “I’m The One” shuffle. Or the “Little Guitars” tremolo. You can go on and on with this, song after song. Anyone who thinks Ed has no right hand clearly isn’t listening!