What has Steve Vai become?

I have always admired Steve Vai, but him getting into NFT, and after seeing this I just don’t know any more if I get what he is doing. This just seems so gaudy that it turns me off. And I get it, but the way it looks is just to much for me. Plenty of EDM artists use many different electronic pieces of gear to live play pieces of ambiance or different EDM styles, but this is just so silly looking to me. And this is coming from a huge Steve Vai fan that literally sees Passion and Warfare as the best instrumental album of all time. I have listened to it probably 1000 or more times. 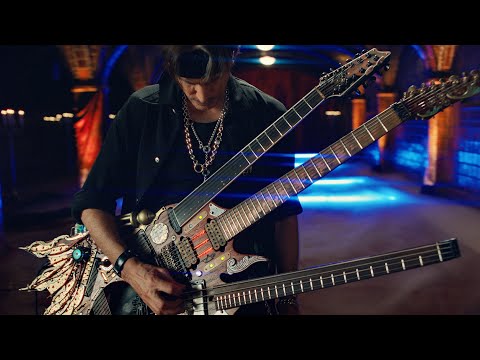 Like all of Steve’s stuff, I thought it was great. He’s really courageous - constantly pushing the boundaries of what an instrumental rock guitarist is “supposed to be”. I don’t know, I just really enjoyed it. hehehe just a different angle of Steve I guess.

If I closed my eyes I would probably enjoy it, to bad I am not blind. 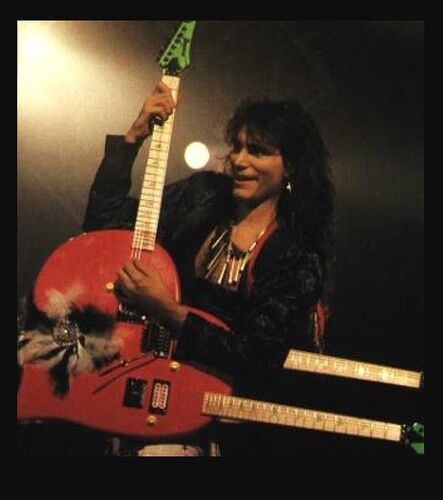 But thats not near as over the top as this hydra guitar. That is one slab of wood in the shape of a heart. And he is much younger here, so he gets a pass.

I actually thought this was really cool. Nice melodies and sounds and I have a lot of respect for the ideas he comes up with, even if they do appear batsh1t crazy haha

Honest suggestion, just don’t watch the videos, just listen to the music and then judge based on that - if you straight up don’t enjoy the track, then it wouldn’t have mattered if he had stood there with a Jem/Pia.

If you like the song, then you may watch again and appreciate what he is doing technically, even if it looks silly.

I know plenty of people that like his music, but can’t stand watching him because of his facial expressions!

In fairness though, im not sure if this is a miming playthrough or multiple edit affair (I nees to re-watch) - I’m skeptical of a lot of guitar vids these days, but thats another topic entirely

@crenfb91 already said it lol. Sorry, I started writing this half hour ago and didn’t see it!

But the whole premise behind it is the visual, otherwise it would look more like the heart shaped guitar the other guy commented.

Out of the heart-shaped and the Hydra, I know which one I’d choose!

But thats not near as over the top as this hydra guitar.

I think he is just having fun and Ibanez will build him whatever he wants.

But then I dont want to get to into it, but the NFT thing.

Man - Steve Vai has always been the most extra guitarist around, from the transcendental meditation stuff in a makeshift pyramid in his basement, “meditating” on a chord resulting in him needing hand surgery, Frank Zappa’s autobiography goes into some pretty weird sexual fetishes and eccentric behavior he had when touring with him. I’m not sure why you’d expect him not to have an insane hydra guitar in a misty dungeon.

As far as the NFT thing - I mean, idk seems gimmicky and he could have just sold downloadable content without the extra step, I guess I get the idea of having it “verifiable” to give the buyer the feeling of scarcity. I think it’s all a symptom of trying to return the money to the music industry that was lost as a result of the onset of file sharing, but NFTs can’t really solve that problem.

But the whole premise behind it is the visual, otherwise it would look more like the heart shaped guitar the other guy commented.

That was the thing that kind of impressed me, though. I don’t know if I agree the whole premise is visual.

Try listening to this with the video minimized. I expected somethiing pretty gimmicky, with a bass, freteless, and fretted guitar combined into a single instrument, but for me I guess the test here is, “is it just a gimmick, or is Vai able to do something with the instrument that’s actually kind of musically interesting?” And, with the video minimized, it’s actually a pretty cool track. It doesn’t come across as “look at me, and all these necks on my guitar!” when you just listen to it, so much as “listen to this thing I’m doing that involves playing bass, guitar, and fretless more or less all at once!”

Believe me, I think Vai often gets way too far down that Zappa rabbit hole… but this actually works as music, I think, if you just don’t watch the act of him creating it. I liked this way more than I expected to.

NFTs are dumb (and an environmental disaster), but it’s not like he’s the first musician to get into that game, either.

Eh, I dunno. If I close my eyes the track itself doesn’t do much for me—instrumental music in general doesn’t—but it’s fascinating to watch a one-man band play it.

NFTs are dumb (and an environmental disaster)

I’m still very much confused by NFTs, but it seems like a great way to launder money…

I was showing the Teeth of the Hydra video to a friend recently and ended up admitting, yeh that guitar is a bit silly and thinking about it, it’s a probably just a marketing tool to get people to click on his vids. But it’s fine, Steve was an apprentice of Zappa who always did what he wanted, no matter how weird it was and still made sure everyone got paid.

The new music is great. I had my Google nest, or whatever its called, on in the kitchen the other day it was playing random Vai stuff for me, Greenish Blues came on and I recognised and loved it but thought it was an old Vai song that I’d forgotten about. When I looked to see what it was I was shocked it was from the new album.

Not heard about his NFT thing, but I don’t really care.

I’m just happy he’s still around, making music and doing whatever he wants.

What’s an NFT? I’ve not heard this before

What’s an NFT? I’ve not heard this before

It’s very similar to crypto currency in a way or digital assets. It best to just Google for a rundown, because it can get complex, and the legalities are sometimes questionable.