What picks does John Petrucci actually use?

This won’t be one of my usual long posts. I recently tried out each of John Petrucci’s signature picks from Dunlop. While they won’t unseat the Eric Johnson Jazz III as my favourite pick, I do like the JP Trinity and JP Flow designs for some things.

I’m just a little curious. Petrucci has 4/5 different signature picks. Which one does he actually use? Or, if he uses each design, what does he favour each design for?

Long ranty answer: Though I can’t speak for present day, on Rock Discipline he plugged the black Jazz III. If it was good enough to meet his needs during that period of Dream Theater output, I’m inclined to think anything that has come after has been more about business than performance. I mean, I’ve certainly gone through a few different favorite picks over the years myself, but I never departed a pick that let me play like John Petrucci in his prime.

Yeah I’m aware of that.

Interesting. I haven’t bought Jazz III in a long time. I remember disliking the Red back in the day because they were glossier than the Black. My current crop of black Jazz III XLs are still more “matte” but I can’t remember how long ago I bought them. Nowadays I’m mostly into the Ultex Sharp picks, and to a lesser degree, rediscovering heavy celluloid. And I don’t know if Tortex has changed too, or if it’s just my ears (or hours on Ultex picks), but every Tortex pick I tried in the last 2 years or so has sounded really dull to me. And the ink seems to smudge more than I remember. And why won’t those kids get off my lawn!

I have some old jazz iii reds I bought way back, maybe 2008. They aren’t different as far as I can tell from the regular black ones and are just as glossy. That being said, for as long as I have been playing guitar, (early 90’s) I don’t seem to remember them (red or black) ever being matte like the grey nylon picks were.

I still have a few Jazz IIIs from when I was a teenager, definitely from before 2005.

The reds are matte like the current EJ Jazz III, but with the standard profile. They wear smooth and they get really grimy with use. I actually prefer the EJs.

The blacks are much less glossy. The surface is almost textured. They have some kind of fibrous material as part of the plastic. They’re impossible to bend by hand and they wear totally smooth. The current blacks really aren’t similar, nor is any current Jazz III I am aware of.

I don’t seem to remember them (red or black) ever being matte like the grey nylon picks were.

They didn’t have an obvious geometric pattern embossed on them, they were just sort of slightly “rough”. Posted some picks of a gently used one below. The tip looks smoother than the rest, but this pick may even be completely unused. Jazz III’s I used for any significant length of time I tended to put unmistakeable wear on the edge of the tip.

In the pics below (taken under an LED desk lamp) it could be mistaken for a layer of dust, but it’s definitely texture of the pick material itself. I think the earliest I ever bought Jazz IIIs was 2004, but this could be newer. Probably older than 2009 though. 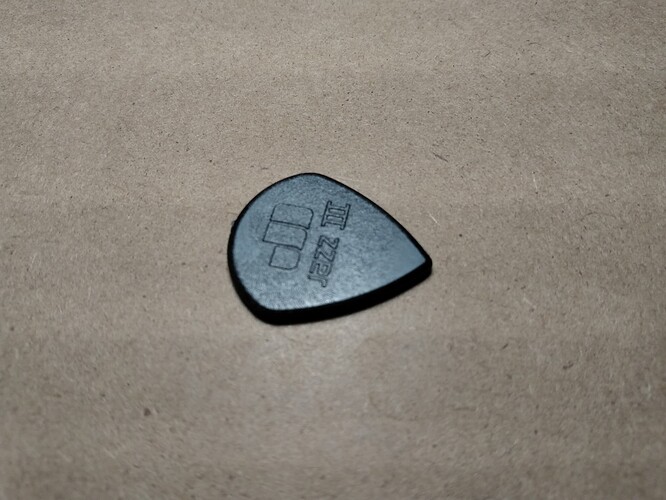 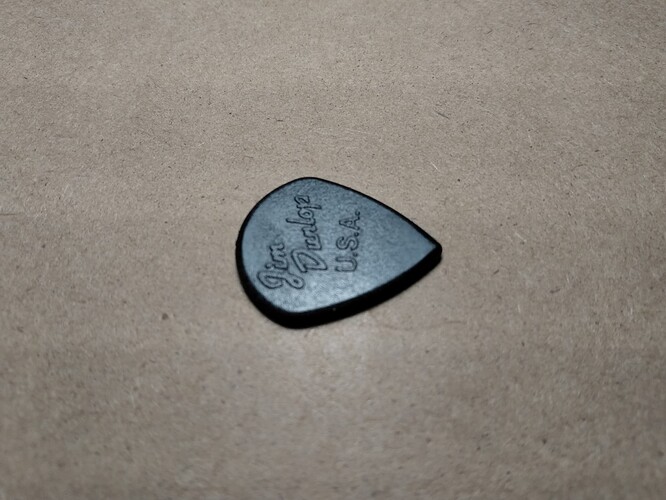 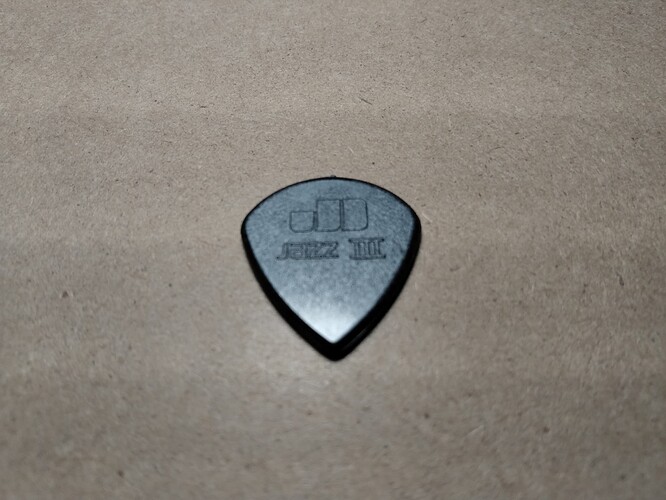 I appreciate the original jazz III for being one of my first steps into small pointy picks, but I definitely moved away due to QC issues and changes.

I remember emailing Dunlop and giving them feedback on a pack of the black jazz IIIs that were pretty badly made (early 2000s). It looks like they were manufactured with two sides that are then joined together (imagine an Oreo without the cream), and the joint was offset enough that the edges were catching horribly on the strings. Being nylon, they would take forever to wear in, which made them kinda useless. A rep for Dunlop apologized, asked for my address, and sent me like 30+ picks (maybe more, like a DVD sized package). All the ones that were sent not only seemed to be pretty much even with regards to the two sides of the Oreo, but the tips seemed to be smoothed over, as if a heat source was applied (the normally matte material seemed glossy). I recall them not even being in their usual retail packaging.

I eventually just jumped ship to their tortex line of jazz IIIs since they wear much better and overall have a tone I like more, but that package I was sent had the best “original” jazz IIIs I’ve played.

My long story was a setup for an answer to your question: I wouldn’t be surprised if Dunlop had a set of “nicer” production picks available at the time specifically for people like JP, and maybe still do. Maybe that additional attention to detail is what led to their line of signature picks.

Apologies if this was a non-answer, just bringing up the possibility that it’s not a consumer-available pick. Hell, maybe it’s just a small batch of picks from multiple eras / models that he’s taken the time (pun somewhat intended) to wear in just the way he likes.

Sorry your thread is coming up dry @Tom_Gilroy. Could be Marketing but the way he goes on about the Trinity here makes me think he’d prefer them

It is enough to convince me to grab a pack

if nothing else they seem like a great value since they would take 3x as long to wear as a normal pick.

I have no real idea what he uses, but he seems to currently be pushing this new 1.4mm thick model in Ultex, where it seems to be three Jazz III picks chained together with bevels from a Flow. (I have randomly chosen the 2.0mm Flow as my default pick, and it’s fine, but I’m not JP. Then again, perhaps Troy is my hero, because he can use any pick—well, as long as it’s red.) 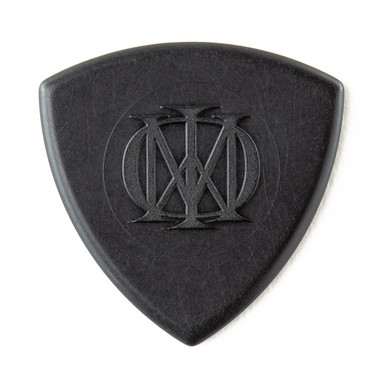 From picks to pedals and every accessory in between, Dunlop Manufacturing has been creating world-class gear for musicians for over 50 years. We consistently create the best selling picks and analog electronics, and carry a large line of accessories...

Every few years I order a variety of different picks (designs, gauges, materials, etc) and try them out. This time around, I tried all of the Petrucci signature picks and a few others.

I don’t like the JP Jazz III variations much (compared to other Jazz IIIs) but I like the JP Flow and Trinity designs for certain things. I just find it a little odd that he has 4/5 different signature picks.

Yeah. It is enough to make you wonder if they are just putting his name on certain varieties to help with sales. I found a video very similar to the Trinity one I posted where he was raving about his Flow model in the same fashion.

I don’t really mind if his name is being used to sell picks he doesn’t use. There are genuine differences in profile, gauge and materials. Dunlop aren’t just using his name on standard picks and selling them at a higher price. I just think there should be some transparency about what artists actually use.

I’d also appreciate it if somebody had a signature Jazz III which was the material of the old black Jazz IIIs but with the profile that’s used in the EJ and standard ultex versions.

I am not a JP pick expert by any stretch of the imagination, so this might be wrong, but there seem to be some themes:

I don’t know how far back one can trace his signature models, but there seem to be themes of his that I have copied. Then again, I look at Paul Gilbert with a non-rigid pick and wonder if it’s just taste.

Well we do know for a fact that he did use the standard jazz 3 for a good number of years before his signature picks, so you really can’t go wrong using that. Unless there’s some sort extra something in his recent playing that you feel boils down to pick choice, I would just use whatever you like and works for you.

My curiosity isn’t so much about Petrucci’s playing, etc. I enjoy early-mid Dream Theater and I respect his playing tremendously, but I’m not very concerned with imitating him.

It just seems so strange to me that he has so many signature picks, I can’t help but wonder.

He’s had a lot of redundant signature everything in the last 8 years. 4 different sets of pickups, guitars etc… sometimes all concurrently.

I started trying out new picks last year and ultimately chose the JP Trinity, and not because JP endorsed it but it was just better than all the rest. It has the tip geometry of the Dunlop Flow (a great pick if you haven’t tried it), the size of a Jazz III, and the triangle shape ensures that you can’t grab it the wrong way. It hooks into the first joint of my index finger which keeps it from spinning around, my biggest problem with other picks. Three tips means you’ll lose it before it wears out.
They’re too expensive, but still worth it IMHO.

For fun I just ordered six 1.4mm Trinity picks to compare with my usual 2.0mm Flow.