Hello, Everyone! I hope you are all doing well!

I thought it would be fun to share this Vinnie Moore Mind’s Eye Era retrospective lesson I did for my YouTube channel. I play a bunch of Vinnie runs and pull out some of my Vinnie magazines and albums from that era. It was fun making this!

His playing during the Mind’s Eye had a huge impact one me.

Great history lesson! I’ve always been a fan of Vinnie Moore, Al Di Meola and Paul Gilbert, but I hadn’t connected the dots until now.

My picking form looks like Vinnie’s, I might start working on his concepts a bit more seriously.

Thank you so much, @BillHoudini!

Yes…Di Meola, Vinnie and Gilbert all share the same basic approach when they play their faster alternate picked lines. All three are great and amazing players! I love their playing.

Love your playing! Vinnie was/is one of my favorites of the era as well. I too pick from my elbow and I am wondering if you have had similar problems that i have.

First, the tennis elbow that occasionally flares up. But more importantly for me, when I play the sextuplet lick in Shadows of Yesterday, I will call it the second part of the verse fills. The tempo is right in between what I can do easily with my wrist, but too slow for my elbow to play it well in tempo. Do you find that there are tempos that give you fits?

It’s awesome to hear you play his stuff, especially the Vicious Rumours stuff, one of my all time favorite records of the era.

Thanks so much @shredhead7! I never had any problem playing licks at different tempos. My technique is a bit different at slow, medium and fast speeds. At medium speeds I use a blend of elbow and a more rotational motion but I am not really aware of it when I am playing so much. I just bounce between the two motions. I just always think of a line more in terms of a phrase and that always helped me feel the motions. I hope that helps and good luck with your playing!

Thanks for the quick reply. I would love to see how you play the verse on NNY. That is the riff that I have been working on, trying to develop a wrist technique to cover that in between speed. That riff in particular is right where it is hard for me.

I can play Frevo Resgado from Friday Night in San Francisco, but I can’t play the head to a 134bpm song. So frustrating.

When I get a chance I will listen to it, @shredhead7! I love the whole Friday Night in San Francisco album…a huge inspiration to me!

I enjoyed your video very much, both the commentary and the playing. Please make more!! And of course your playing is so clean I could wear it to a job interview

PS: are you familiar with some of his later stuff like Meltdown, The Maze, Defying Gravity and Aerial Visions?

Vinnie kept evolving in very interesting directions, and listening to his music makes me feel like I am in the middle of a mysterious and fascinating adventure. Ok enough with the cheesiness, but I just love the guy what can I say

Hello, @tommo Thank you so much…I really appreciate it!

I love all of Vinnie’s work…he is such a great player! I have all the albums by him that you mentioned.

The Page-Rhoads triplet lick was the first sequence I ever learned…I still play it!

Anyway, I was blown away by this guy, but when I went to see him, I was one of like 5 or 6 people there… Right up front, I stood watching him… He was totally incredible and could pull off all of the stuff on the record live… I never saw anyone that technically excellent.

I remember thinking this guy is so awesome, why is there only like 6 people here??? He deserved better…

Vinnie is world class artist, he would be a rock star in a more mainstream band.

thanks again for this retrospective.

Your playing is exemplary as always.

I was always fascinated by Minds Eye . Some of the picking runs in particular
really puzzled me - such as this one: 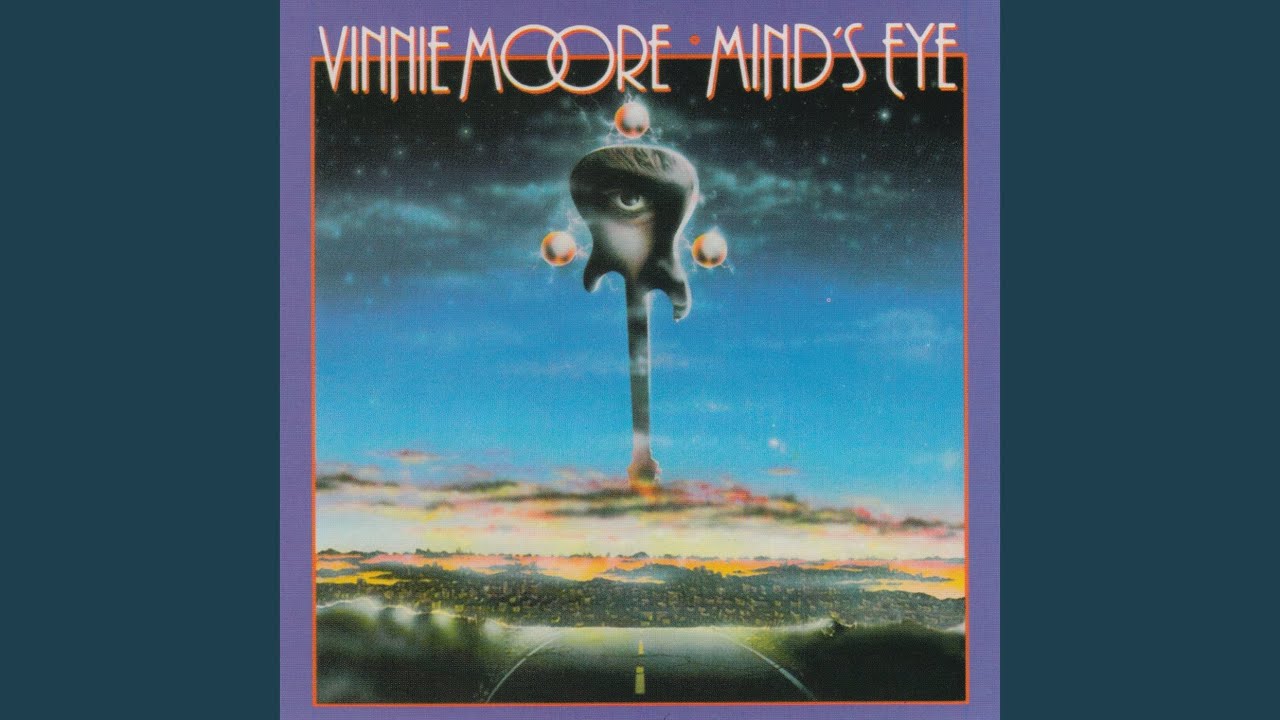 I have a number of questions about Vinnie:

(a) to me the long alternate picking lines present on Minds eye (as in the example above) and the legato lines began disappearing on subsequent albums - would you know why?

(b) Vinnie seemed to me to completely abandon the shred style in favour of a more blues/ country/ rock type of style. Again does anyone know why? 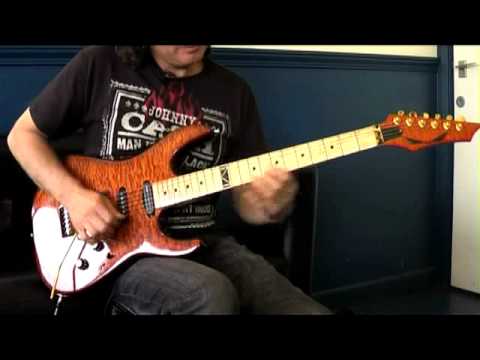 There are two main reasons.

Mind you that he can play everything he did back then, he’s just a bit less accurate and he might have a very off night every now and then. We’re humans though and that’s natural. He wrote some very demanding guitar parts, you need to be on top of your game to play them consistently night in and night out.

Source: I’m a Vinnie Moore fanboy and I’ve researched stuff about his playing because my natural picking motion looks a lot like his.

Source: I’m a Vinnie Moore fanboy and I’ve researched stuff about his playing because my natural picking motion looks a lot like his.

Hey Bill! Another Vinnie fanboy here as you know

I didn’t know about his injury! I’m surprised because I recall reading an interview where he stated that he never had any pain or issues coming from the elbow picking - but maybe that was before the injury. Do you recall where you read about this - and when the injury happened?

Something very clear that changed in his playing is that he started to introduce a lot of hybrid picking and more rock/bluesy stuff from the Meltdown record onwards. I wonder if it’s the hybrid thing that actually led to his more recent hand setup - because I would imagine that his “old” hand position would not make it easy to add in the middle and ring finger plucks.

I often wondered if there was an injury issue!

I think we all agree on how amazing Vinnie is! LOL I remember spending AGES trying to work out those Minds eye licks - still can’t play them!
I know @tommo has this stuff down too- have seen a clip of him sailing through some legato!

I have a fascination with players changing and why - goes back to my early Yngwie study and why things started changing in his playing,

I know @tommo has this stuff down too- have seen a clip of him sailing through some legato!

You are thinking of my Thinking Machine or Beyond the Door covers? I made up some similar-sounding legato lines because for the life of me I couldn’t figure out the real thing. And this was after plenty of time spent googling tabs, slowing down and looping records, etc. I think Vinnie was just wiggling his fingers really fast on his favourite patterns - just “letting it loose” - and I doubt he remembers what he did.

At some point I realised only 3 people in the world, myself included, might care if I’m not copying the runs 100%

EDIT: because at the end of the day, 99% of a musical line is in the target tones (IMO)!

There isn’t any online evidence that Vinnie Moore has sustained a specific hand related injury.

However, elbow injuries are the most common overuse injuries in this body area, they’re long lasting and not very easy to recover from.

I’ve studied his old vs new videos quite a lot since I came across CTC and I can surely tell that something has changed quite a lot in his movements throught the years. From pure elbow mechanics he transitioned to hybrid picking and wrist mechanics, while opting for legato in previously alt.picked sequences. If the result was better than before, I would argue that it was a stylistic choice for optimal results, but it clearly hasn’t.

Of course he’s still a world class guitar player, but he hits softer, he’s not as consistent and he plays a more laid back catalogue in his live performances.

Funnily enough, I know a few people who played/toured with him and they have given me similar feedback.

I’m not his personal doctor or his best friend, so take all that with a lot of salt.

Thank you so much, @Interestedoz ! i am glad you enjoyed it! His playing has changed so much from what is was…still an awesome player, although I really miss his 80s playing a lot! I think like the others have mentioned he just lost interest in that style. I don’t know anything about an injury…I remember reading an interview where he was asked if he ever had an injury and he said that he never had any type of injury picking with an elbow mechanic. He said he just doesn’t practice playing like that anymore with a lot of technique. He said he just prefers writing and recording songs with his time instead of practicing a lot. I sure love his 80s style like the all of you! His first two records were as good as it gets for me

He said he just doesn’t practice playing like that anymore with a lot of technique. He said he just prefers writing and recording songs with his time instead of practicing a lot.

Good point! Maybe the level of practising required to play Minds Eye note for note live is not something he wants to do anymore. I wouldn’t know what it would take to keep that level of chops up as I can’t play the songs! lol
It is interesting that 3 of my favourite players don’t really replicate their early alternate picking much these days : Yngwie, Vinnie, Paul Gilbert.

Is it just too much work? What do people think?

I think Paul Gilbert once remarked that he thought alternate picking was like keeping exotic fish as pets… High maintenance. I study with Anton Oparin and he told me after 4-5 days of not practicing diligently his abilities diminish. This is a guy who can skip 4 strings or so with pure alternate picking at 170-180 BPM.

In general, alternate picking is a very challenging technique.

No real source on the below, but interesting if true:

“In winter of 1986, Racer X recorded their sophomore album, Second Heat , with compositions relying more on harmonized and dueling guitar solos. In order to perform these songs live, Paul and Bruce would often practice for 8 hours a day due to the technically demanding nature of the lead parts.”

Bruce Allan Bouillet (/buːiːˈeɪ/; born February 3, 1965, in Memphis, TN) is a guitarist who played in the bands Racer X, The Scream, DC-10, and Epidemic. Bruce Bouillet was born on a naval base in Memphis, Tennessee, and relocated to Vincennes, Indiana at a very young age. His father, a bluegrass player, exposed him early on to country and bluegrass music. At age 12, Bouillet saw Judas Priest open for KISS on the Unleashed in the East Tour, thinking they were a religious band, and immediately co...