Floyd Rose has a new guitar that trains you to pick by forcing a shallow pick depth, because of the raised body under the strings… interesting
sure the Frank Gambale Ibanez had a similar thing

or you could just chop the plectrums really small so there is less to dig in ? !

Unfortunately I think that this is based on the usual myth “small movements (and/or small amount of pick) = good technique/speed”, so I’d advise anyone against it.

The last few years of CTC investigations showed pretty clearly that it is possible to play very fast and clean with quite a lot of pick on the string.

Also, being able to vary the pick depth is essential for dynamics/accenting.

I remember the speed pick - I probably still have one hidden away in a drawer somewhere - was intended to do the same thing. I didn’t really give it a lot of practice but I just liked the round nature of the point - someone should just make a pick with a round point like that - minus the lip to catch the string as a penalty. I think that would fit my picking ‘style’ better. This is the same thing I guess - intended to train you to consistent depth. I saw Tim Pierce talking with Floyd Rose about the design. I’m just glad he decided to do away with that routed out headstock. Was never a fan of that his first go around. Have to at least respect a guy that never stops trying to come up with new creative ideas and acts on them. I have a lot of ideas too - I just don’t do anything with them.

I do know that guitarists have a natural tendency against anything ‘gimmicky’ - that will work against him. It looks like a nice guitar - depending on price point.

The stylus pick enforces shallow penetration of the string but Floyd apparently enforces that AND very little angular deviation from the plane of the strings. I suspect that I could not play that guitar because restricting the latter is likely a bad idea. Also, won’t it look like a mess (er, “relic”) before long due to paint being smashed off?

Because of scratching, probably not being able to play a normal guitar and something that was not mentioned before, what about finger-/hybridpicking?

Floyd sent us one. Super nice guy. Teemu’s visiting today as well so he and I are playing it. We’ll film some thoughts for the YouTubeses.

Teemu’s visiting today as well so he and I are playing it.

Ok now you just want to make us envious

Please ask Floyd how many foot pounds of torque a customer should put on the string retaining screws and why they don’t make a Floyd Rose branded torque wrench that is perfect. I have called them before to ask and their support spouts nonsense like “not too tight,” but I know Floyd would know as HE IS THE MAN!

Teemu’s visiting today as well so he and I are playing it. We’ll film some thoughts for the YouTubeses.

Very cool news. Looking forwards to seeing any footage from this!

Have any of you guys tried this? It is called RunBarr!

If someone in the states can have a go and do a review that would great!!! That’s the website to buy it wtih different sizes! http://ezrollguitar.ipower.com/ezrollguitar/id51.html

The only thing that I would do with this RunnBar I would get it set it in a bit of angle like that: " \ " so when I change strings my picking hand gets angled." on the higher strings my hand goes towards the head-stock and on the lower strings goes more towards the bridge…

This is essentially doing a similar thing to what a ramp does on a bass for fingerstyle bass players. Is it necessary, no. But it might help someone out there. But that guitar it gonna look like shit in a year from pick wear on the body where the strings are. Probably should have been a pickguard, a metal pickguard because hitting those with a pick or fingernail is like instant nails on a chalkboard feeling.
Another option that works a bit is a guitar with a prominent middle pickup. I didn’t want to mess with the setup on my RG550 Genesis because it was so perfect stock and the middle pickup was quite high. I hit it quite frequently when I first got it but over time my picking adapted to not dig in as much.

Ha. When we were editing this, I actually looked up what “can” be said. Turns out there are apparently guidelines for this that aren’t super obvious. No profanity in the first 30 seconds of the video, but certain kinds ok elsewhere. No profanity in titles or poster images. I never knew that.

Oz Noy said he was “just fucking around” in one of the clips we posted, but it was so good-natured and brief I left it in and I didn’t think anyone would care. I don’t think they did.

I just watched the YT video where Troy and Teemu take the Floyd Rose Speed Guide axe for a test drive. I have also seen it demoed on other channels (Tim Pierce) and have been thinking about this.

In my experience, the depth of the pick really does matter on the attack of a particular string but not so much on the follow-through, whether that means a rest stroke or an escape. I can see where smaller motions on rest strokes escapes and might make sense - but for me at least - it’s more about not getting buried on the attack - unless that’s what I’m going for.

It sounds like you may be conflating pick attack and pick motion. My apologies if I’m misunderstanding. To me, pick “attack” just refers to how much pick hits the string, not how far the pick moves away from the string either before or after it hits it. That’s the picking motion itself.

As far as attack, even though this is not something we have really talked about, when you look at footage we’ve filmed, I do appear to use a relatively small amount of it regardless of the type of picking motion I’m using. Big motions or small motions, wrist or forearm, the attack is uniformly pretty small. I do this by feel, probably like everybody does.

In fact, it’s significantly less than the Speed Guide itself, which is interesting. Because when I play the Speed Guide-equipped guitar, and I feel like I’m hitting the body, it turns out that it’s not because I’m using any more pick on the string than probably other players do. You can see this very clearly in the slow motion shots. The attack is often tiny. Instead, it’s because the motion continues past the string. And again, that’s a whole different thing.

For dwps economy type playing, like Gypsy lines or EJ lines, and especially with wrist/forearm motions, I really feel like I need more motion “runway” below the string to make them work. I feel like the rest stroke requires this to place more pick on the resting string, in order to truly come to a rest and stop — or at least to slow it down for timing purposes, which is what I think the rest stroke does.

And it’s not just me. If you check out this awesome Albert Lee clip for example, you can see how much meat he gets on the rest strokes, which is significant: 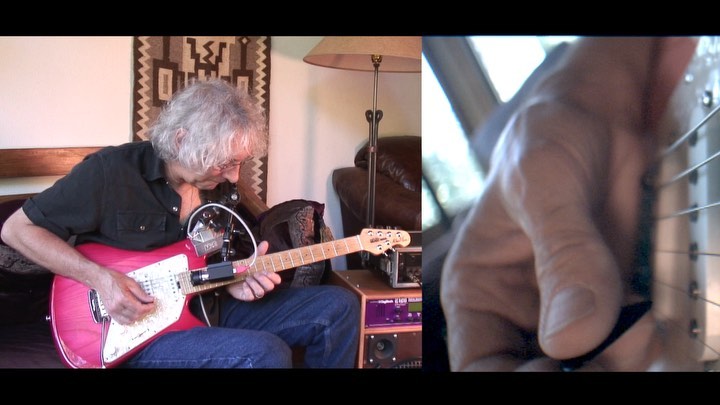 529 Likes, 7 Comments - Cracking the Code (@crackingthecodeguitar) on Instagram: “We'll always be grateful to the amazing Albert Lee ( @official_albert_lee ) for giving us such a…”

I don’t know, but I’d guess he’d be hitting the Speed Guide as well. Whether he could adapt, and whether that change would be positive, I can’t say. Again, I really tried to check myself in the test drive of this guitar because there are unknowns and they should be represented as such, not as one guy’s opinion or impression.

What Floyd could have done that makes much more sense is a heat-sink like design with one fin under each string.

Floyd’s current design is obviously flawed because it basically breaks rest strokes. Instead, I wish he could sell me a torque wrench to tighten the strings…

Can’t comment on the interview as I’ll watch it during the weekend, but what an intro jam?!

Thanks for the free content Troy, never taken for granted.

I have a Runbarr on my Tele. Kind of hard to judge it. It does prevent you from digging in too hard, and in that sense I think it helps. But it makes it harder to do pickslanting. Plus, hearing your pick tapping on the plastic can be kind of annoying. Nevertheless, it’s only $20 so worth trying for those interested.

It sounds like you may be conflating pick attack and pick motion.

Thanks for the clarification! I think we are saying the same thing - you’re just saying it more clearly.

Interesting to note the need for more “runway” in some approaches.

Troy - quick summary from me:

I’ve been trying (intermittently) to sort out my picking for the last couple of years since I discovered you and realised I was making the same mistakes as you were back in the day, but I never got past them. I’ve been working to correct 30 years of incorrect technique and made some progress with USX (versus the awful version of crosspicking I had come up with myself and got frustrated with the errors that slipped in as soon as I sped up), but I’ve still been sounding inconsistent and catching incorrect strings a lot - not consistently, but sounded staccato and just ‘rough’ when I tried to speed up at all (even 16ths at 120 - I’m out of techical practice for a bunch of reasons).

Then I’ve watched this this morning, and realised I’d never really thought about pick depth! Just tried playing along, being really aware of the pick depth, and I sound so much smoother! It’s not as if this is a ‘fixed’ problem (in fact, I’ve always played 3 pickup strats and moved the middle pickup as much into the body as possible to avoid catching the pick on the pickup poles, so that says something!), but I feel I can see a road forwards. Obviously changing this aged 48 is difficult, but at least I feel like there is a solution.