For ages I’ve heard players say “move your fingers as little as possible. Keep them as close the fretboard as possible.”

I’ve heard this mantra for 30+ years from numerous players. Both local guys and world-class players in videos and interviews.

I can understand the logic - just like I understood ‘start slow and speed up. You’ll get it.’ As we now know - that isn’t even close to the whole story.

I have nothing but respect for both these guys, but part of me keeps thinking “This is a waste of time.” So…

Do people find these exercises (and others like them) helpful and worth the time?

have you ever seen yamandu costa? 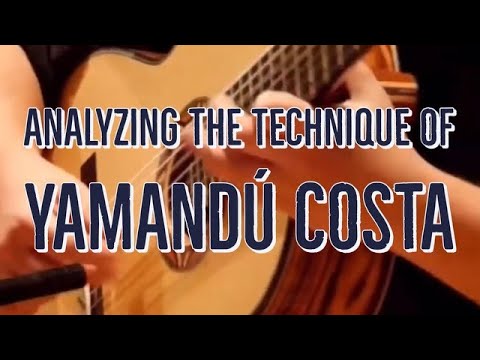 How come? I don’t have an opinion either way, just curious

Fingers are not independent in an anatomical sense and no amount of these exercises can change that. You’re not learning finger independence by practicing these exercises, you’re learning highly specific, non-transferrable coordinations which involve carefully balancing tension in opposing muscle groups.

Also, the usual presentation of economy of motion is based in the idea that making movements smaller makes them faster, but this simply isn’t true. Small doesn’t make fast, fast makes small. Starting small and trying to speed up results in movements which are too small to be functional.

EDIT: Also, not to boast, pat myself on the back, or to put either Bernth or Paul down, but I am much, much faster than either of them. Woopley-bloop nonsense fast.

My gut has always told me finger independence is mostly nonsense. Watch Eric Johnson’s pinky. It’s all over the place. Sometimes curled up so the tip is below/behind the fretboard.

As far as anatomy goes, the fingers share tendons, muscles and also nerves.

As for being quicker than Bernth…are you certain? Paul Davids is no shredder…but Bernth has some insane velocity.

As for being quicker than Bernth…are you certain?

Would you feel the same if instead of finger independence it was just phrased as optimal fret hand positioning? Because I don’t really see it as “training my pinky to only come this far off the fretboard…” but rather having my hand in this position allows my fingers to be closer to fretting

Not to the same extent.

Optimal fretting hand posture is context dependent and no exercise (or set of exercises) covers every possibility. You’re better off learning in those contexts, or with coordinations that are actually transferable to those contexts.

Also, it must absolutely be stressed that the terminology we use is important. It forms an unconscious bias in students about how things are “supposed to be.”

Focusing on optimising your fretting hand positioning and fretting mechanics is an incredibly worthwhile pursuit. Focusing on developing “finger independence” and “economy of motion” leads people to misunderstand what it is that they should actually be trying to achieve, because the very conception of these ideas are flawed.

Do people find these exercises (and others like them) helpful and worth the time?

On a similar note, I recently noticed that Yngwie sixes felt easier and were a little bit faster than my other single string licks because my index finger naturally remained planted on the fretboard instead of lifting slightly. I’m trying to train keeping the index planted into my other licks and have definitely noticed a difference when it gets going but it’s still a work in progress at the moment

Just wait until you play on an acoustic type guitar you will be trying to contort your fretting hand to get your soundhole to shut up the ringing of the other strings that you aren’t hitting.

That really needs to be made official CTC verbage. love it!

Wanted to add that imo one of the most harmful facets of finger exercises for the improviser or composer is that you start to build muscle memory for things that have no musical meaning to you.

This was a very real rut I had to get out of (TBH not sure if I successfully have!) because I used to do various drills and scale/arpeggio work all day.

About 20 years ago I was playing with a great musician and teacher and I said “when I solo it just sounds like I’m running scales and arpeggios” and he said “I hear a lot of my students say that. Then I ask them what they’ve been practicing, and they say ‘well…scales and arpeggios.’”

I know the following sounds dramatic but sometimes I wish I had never practiced scales as much as I did. In retrospect I think the way I did it really created distance between my melodic ears and what comes out on the guitar. (Knowing how to play scales and where the notes of every scale are is basically essential - being able to fluently blaze up and down the neck for every scale is a party trick or something cute for a video…)

Sorry for digressing as I know the topic is physically mechanical exercises, but similar principles apply IMO.

So, more specifically, I agree with @Tom_Gilroy 's premise here - I’ve sometimes had students be almost insistent that either I give them ‘general’ exercises, and/or that they have them as part of their practice routine, and it’s often been a hard sell that I want them to work on things that are much more specific to their goals and current strengths and weaknesses. Honestly I think part of it is just wanting something kind of mindless to sit and do to feel productive and to be able to say “I practiced.”

This isn’t a knock against any specific exercise, just the concept of ‘general’ exercises that aren’t trying to solve a musical problem. I give students tons of exercises, but I give them in response to whatever difficulty they are having with the actual thing we’re trying to play.

Wanted to add that imo one of the most harmful facets of finger exercises for the improviser or composer is that you start to build muscle memory for things that have no musical meaning to you.

I totally agree with this, and it’s a trap I certainly fell into when I was younger too.

I know the following sounds dramatic but sometimes I wish I had never practiced scales as much as I did. In retrospect I think the way I did it really created distance between my melodic ears and what comes out on the guitar.

I’ve definitely had this happen too.

I wouldn’t say that I wish I hadn’t practiced scales, intervals, etc as much as I have, but I wish I had done it differently, with much more emphasis on internalising the tonic and singing along with my playing.

This isn’t a knock against any specific exercise, just the concept of ‘general’ exercises that aren’t trying to solve a musical problem.

I try to avoid practicing or teaching “exercises” in the conventional sense. I try to think in terms of “rudiments,” like a drummer. By this I mean short, rhythmic coordinations which are clearly transferrable to different musical contexts. The goal is always to use high-value, transferrable coordinations to develop musical vocabularly as soon as possible.

I also struggled (still struggle) with this but ive made some peace with it. In my practice time growing up, I definitely enjoyed sitting down and working on licks, exercises, whatever you want to call it. But I really enjoyed that physical aspect and that physical challenge. I dont consider that time a big loss. Maybe Im just rationalizing, but ive accepted a good chunk of being a guitar player is the built in spectacle of it. Watching a really good guitar player rip is largely an awesome musical experience but theres a spectacle to it as well; a wow factor if you will, where at least personally I forget about the musicality of a solo for a second. And this is coming from someone who really doesnt like crazy tapping or sweeping. Obviously the musical notes and choices are in play, but ive accepted the spectacle aspect of it. Also, to counter mindless noodling, i love watching movies to relax, so ill practice high value material like a song or part of a solo while watching a movie. And when movie music comes on, I will try to play along with that or build something to add. Movie scores are insanely musical so I feel like thats good practice outside of the technical stuff. I still sometimes feel too like my playing is just running scales or whatever and when this happens, I listen/learn more pop music and go back to learning songs from guys who do more with less like Slash or SRV if that makes sense.

When I started playing, perhaps the best thing my instructor did for me was show me Box 1 of the A Minor Pentatonic - and then showed me how to improvise over chords. It was almost literally day one, lesson one.

I never really ran scales or arpeggios the way many do/did. It was a very different thing. I was a bit of a late starter at 18.

Within a few months I was comping chords behind him and taking the odd chorus during brunch at a local restaurant on Sunday mornings for $50 a gig. Talk about trial by fire.

Now, I very much skipped most of the traditional scale and arpeggio practice. At the time, I had no idea and didn’t care. I was playing music…and I was hooked.

Never did finger independence exercises(I found them boring) but some people swear by them.

there are so many different kind of phrases that require such a wide range of fretting hand work that it just seems kinda silly. i mean wouldnt this just happen naturally during the infancy of learning some new phrase/arpeggio in the first few days of learning something by playing it with slow flow to learn the fingerings and their motions as well as the picking strokes involved?

of course i have been playing for so long that i dont know how hard it might be for a real beginner.

maybe think of it like this when you type do you think about the distance your fingers are coming up before striking the key or does it just happen? I honestly don’t know if when you consciously made an effort to make it as short of distance as possible if you would see it developing into the fast motion when you wont be able to think about it as it happens more subconsciously. almost like when players play ultra fast they don’t use the same picking motions as they do slowly.

however i will say this i think certain things work for some people, watch joe stump play and he does this kind of thing when he solos. his fingers are insanely close to the fretboard during ultra fast runs. so the only person that can find out if it works for them is to try it out for yourself. but again does he do it consciously or does this just happen subconsciously because the tempo is just so fast that maybe this is what is required of natural body mechanics to accomplish such a steep tempo.

Also, it must absolutely be stressed that the terminology we use is important. It forms an unconscious bias in students about how things are “supposed to be.”

This is well said. Agreed.

I used to do them as a beginner, but then recently, as I got into playing intermediately fast speeds (140+ bpm 16ths), I realized that your hands did exactly that by themselves. The fretting hand movement gets optimized and you end up with fingers close to the fret board without having to do any wacky exercises to get there (from my personal experience).