If C major is the scale for a C chord (the I chord in the key of C), then why does F sound terrible over a CMaj7 chord?

If C major is the right scale for a C chord (the I chord in the key of C), then why does the note F sound terrible over a CMaj7 chord?

Because F is a fourth. It won’t sound terrible, but it’s not a perfect match either.
The other way around it will sound fine though - C is a fifth to F.

Depending on the voicing of the C chord being played (like a conventional first position open C chord),

it will sound ‘bad’ because it’s clashing with the E that’s part of the C chord (2nd fret of D string). That’s a minor second and it’s in a low register. Typically that type of dissonance is less jarring when it’s in a higher register.

I think this sounds really nice:

Well imo if you put the 4th on a higher register it sounds good! Like if you are trying it in a chord on guitar it might sound crowded and dissonant. But if you play a good voicing on a piano it’s very usable

Also, just to make the final observation I think you need to complete this, when you go from C major to Cmaj7, you’re incorporating a B note into a C chord. Playing the 4th, F, in that context creates a tritone, which is an extremely dissonant interval that BEGS to be resolved.

Complicating matters, the typical way that tritone would resolve would be the higher pitch going up a step and the lower going down, which would imply a resolution to F#, which is totally unrelated to C.

Here is my take as well The F creates a minor second interval against the third of C which is E if E is played in the chord. You do not want to sit on this but it could be used as a passing tone to go back to E. such as a C Sus4 chord CFG that goes to the C Major Chord CEG basically showing it resolves down.
Minor seconds will show up in the Major scale at intervals 3 and 4 and 7 and 8 and these will want to resolve down for 4 or up for 7. Check out Thelonius Monk if you want to hear this kind of dissonance though. This is why pentatonics are favored. They do not include half steps.

Complicating matters, the typical way that tritone would resolve would be the higher pitch going up a step and the lower going down, which would imply a resolution to F#, which is totally unrelated to C.

Isn’t that contextual though? In the key of C major, the most common tritone occurrence happens in a G7 chord to a C major chord. The B and F (of the G7) are the tritone. They naturally are going to resolve to a C and E, respectively. Depending how the notes in the chord are voiced, the resolution will be either inward to a major third, or outward, to a minor 6th. That’s if we stay in C though.

To me, what gets interesting in this type of voice leading is that since tritones can resolve outward or inward, you could use it a sneaky modulation technique. Consider this: 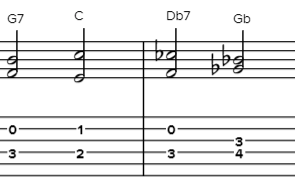 In both measures the tritone contains the same ‘pitches’ but I’ve projected them as an augmented 4th and diminished 5th, respectively. Our ears accept both resolutions. That means, if you get creative, you could use this as an abrupt modulation technique where you go from C major to Gb major. Sort of reminds me of some of the stuff I saw in college theory classes when we analyzed things from the romantic period.

And the question might come from an assumption that if a note and chord are in the same scale then they’ll sound good together, and that’s definitely not true. A scale isn’t a group of notes that sound good together no matter what.

As for 4th over major or major seventh, and tritones not resolving, there are a lot of cool uses for that type of sound, same with half steps in the same chord. I meant to just type up a quick response to the question here and maybe give a quick audio example, then I wound up spending all morning goofing with that little clip above. To me, for the most part it does not sound dissonant or unresolved, but different ears hear things differently. I think it absolutely sounds less stable than more conventional harmony/intervals, but it’s also the kind of thing you’ll hear in film scores and even synth/string parts in soft pop music at times. :

That means, if you get creative, you could use this as an abrupt modulation technique where you go from C major to Gb major. Sort of reminds me of some of the stuff I saw in college theory classes when we analyzed things from the romantic period.

It definitely IS contextual. F#/Gb, same difference, though I suppose I’m getting sloppy with my enharmonic naming conventions and Gb is the theoretically more accurate name - I think you’d need to be careful about how you voiced the chord you resolve to if you wanted to make this work, if you go from a tritone with the 3rd fret of the D, 4th fret of the G to a big 2nd fret bar chord it sounds kind of weird to me, but even moving the root up an octave and resolving onto the Gb on the 4th fret sounds a lot more coherent to me.

Absolutely. Pretty strict traditional voice leading would need to be considered to ‘sell’ this to the listener. This sounds fine and only the tritone notes change: 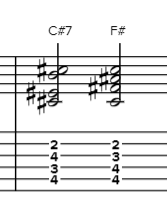 F#/Gb, same difference, though I suppose I’m getting sloppy with my enharmonic naming conventions

Nah, you weren’t sloppy at all. I just chose Gb arbitrarily. In fact, in the above screenshot I even “respelled” the chord as an F#. Isn’t theory fun?

Sadly, it kind of is.

Dissonance. The 3 of the one in a major scale doesn’t get along with the one of the fourth. They hate each other! Take that damn E out of the C chord and they’ll get on much better! In some cases.

I think they sound good together :

@JakeEstner If you stack the chords just right they sound nice. In a constant structure deharmonized C diad rhythm played in 11/17 an F note sounds amazing over the 3 inversion C over its b6th.

Hey @millionrainbows, F is the character note in C major. Sitting on it breaks down a sense of progression in context because it represents the seventh in the related dominant’s tritone. It sounds unstable, not necessarily bad.

On a contrasting note, the major scale associated with the IV, lydian, is considered “the most consonant scale” by Berklee theory, and is sometimes substituted. It has a #4 interval in it, and yet is “most consonant,” and there are no “avoid” notes, despite the presence of a tritone. Which is to say, probably best to hesitate before normatively labeling sounds. Happy Friday.

I think that if one hangs on the fourth long enough on a relatively static vamp, we start to hear a “sus chord-ish” superimposition. Fun! Cheers, D

I think they sound great together. The major 7th is the tone that clashes, but if you revoice that chord so you can get a nice big add4 sort of thing ringing out, maybe like this:

I mean, one, instant Joe Satriani, but two, that sounds awesome, to me.

I mean, one, instant Joe Satriani, but two, that sounds awesome, to me.

Definitely. To the point many of us have made, this type of dissonance sounds ‘better’ when it’s not in the low register. That’s why I like your above voicing. I personally love dissonance in chords. Straight up triads make me yawn. When its in a low register, a minor second just sounds like mud, no matter what the harmonic context (i.e. resolution etc.).

Straight up triads make me yawn. When its in a low register, a minor second just sounds like mud, no matter what the harmonic context (i.e. resolution etc.).

Increasingly tangentally related - as you go lower, even triads can start to sound a little more dissonant, somehow, which has always sort of impressed me. Once you get down to seven string range, something like an A chord inverted over the C# on the low B (B-E-A, fretted 2-5-4) sounds, well… unexpected.