JustDave70 technique critique - speed, grip, and what motion to work on?

Okay, so I’ve just read another thread, cuz the title really jumped out at me.

Help me, I just can't do it Technique Critique

Hello, Someone told me to post in here. I have been practicing trying to do EJ Pentatonic 6’s like every day for several months. I can’t get it faster. I can do tremolo on one note much faster than i can do it when i have to change strings. I don’t know what’s wrong. I have watched every single second of the primer, and the wrist motion deep dive, and went through the check list, tried all sorts of grips and picks. Nothing changes that i cannot keep picking fast if i have to change strings. Or …

So maybe I’m trying to bite off more than I can chew. The past several months I have been desperately trying all kinds of programs and lessons on playing faster, with very little success. Reading that post, I see that I have been trying to run before I can walk. I have the same trouble with hand sync when I play faster than 120, and months of experimenting and drilling has only gotten me moderate success, one lick at a time, getting up to 130 or 135, but only once or twice in about 30 tries, and I can never repeat it the next day.
A lot of the replies to the above suggest trying to do less; like getting a pattern going on one string, sticking with it for a while, then adding a string change, but only one note on the new string. Get that working, then add more notes on the new string. I’m trying to force myself to do 3nps scalar runs, and they crap out too soon. I get to 120-ish and my hands seem to seize up: I can’t force them to go any quicker. But I know there is potential for greatness, because I can noodle sloppily much quicker than 120. See the video : 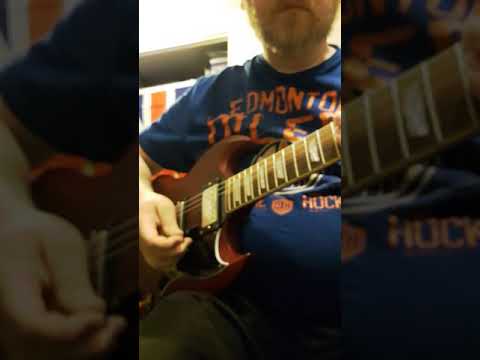 Damn, it’s a little longer than I wanted, but you can see at the end the convoluted system I have to deal with, lol. Put it in the can to stand up, balance it, use the mirror to make sure I can see my pick hand. Ugh!

This tells me a few things, not the least of which is that I can play fast with my left hand, and I can pick fairly quickly. And, I have a long way to go to achieve synchronization. But there is hope.

I guess the question now becomes, what should I be working on first? There is so much I want to accomplish with the guitar, but doing it all at once has proven futile.

Lastly, can anyone tell me what motions and slanting (if any) I am using? I know trailing edge grip, but I’m not to sure of what else is going on there.

The video is a little blurry and the lighting a little dim, but this is what I see:

This means you need to play things that switch strings after a downstroke, at least for fast stuff! Looking at your video it seems this is not always the case, so I would suggest trying some of you phrases (4 nps chromatic for instance) starting on an upstroke. I think this is part of the problem, ie, it’s not all a hand synch problem.

3 nps scales are only possible with some sort of “what was formerly known as 2WPS”, so skip those for now. Your fast motion looks good! You only need to taylor your phrases to it, so to speak.

Hey guys!
I’m definitely a trailing-edge gripper, maybe with a hint of uwps ( I rest stroke on upstrokes and see a bit of space after a downstroke - plus, I tend to naturally play economy on my upstroke (descending) scale passages, but have to really think about it in order to play economy on downstrokes - ascending)

I’ve just gotten to the forearm motion videos, where we finally pick up our guitar and start trying things. I’m a little confused. Am I supposed to be trying to learn the leading edge grip in addition to all the subtle variations of wrist and forearm movements - exactly as described in the videos? Or should I be trying to make all this work with my trailing edge grip, upward pickslant? @Troy does say find what works for you, after all.

Also, I seem to be in a weird zone as far as my speed picking goes. What I mean is, I’m not yet proficient enough with any new movements to see an increase in tempo, but at the same time, my hands seem to have ‘forgotten’ how they used to play fast. Even my single c note tremolo drill is slower than usual. And forget about my 4nps chromatic scales, like in the chapter 6 video on tracking. I can barely do it cleanly at any speed, fast or slow. I used to top 200 bpm easily. My motions new and old are just choppy and uncoordinated. I’m hoping this is a natural side effect of learning a new motion which will eventually sort itself out and let me rip up and down like I’ve always wanted to. Otherwise, this big step backwards really sucks!

Damn, I talk a lot. Hard to explain things when I’m not sure what’s actually happening.

Sorry for the brevity but this stood out for me:

do you mean 200bpm 16th notes? Then that is the picking motion we would like to see!

Same here! Especially since he mentions uwps/dsx. That has me curious, because assuming we start on a downstroke, even numbers of notes per string, like the 4nps chromatic exercise, is a REAL pain in this setup. You’d have to start on an upstroke for the string changes to work out correctly. I always had a hell of a time with 4nps chromatic because my default picking motion was DSX (or even trapped) as I used a prominent UWPS. I string hopped like crazy to slop my way through 16ths at 160 bmp on chromatic 4nps.

Please tell us more @JustDave70! If you were doing anything at 200bpm and it was 16ths, that’s a huge indicator that what you were doing was correct and you should run with that.

Hi @JustDave70 FYI I merged your other topic in here, I think it might be confusing to be discussing the same video in two places at once. And the original embed you shared above seems to be working fine, so I removed the duplicate YouTube clips.

Awesome, Brendan! That works great. I’m still new to the whole forum thing, so thanks for cleaning everything up.

i play with DSX and the 4nps chromatic exercise works just fine. Just start on the second or forth note on the first string, and that is your chunk accent for each string.

Hey man - i know this goes against the advice usuallly in this forum, because here, they usually say, try it fast FIRST, and the whole 'do it slow first" thing is kind of frowned upon…but i think in this case, you actually should follow that age old annoying ass advice we all hate to hear, and actually slow down. You have a fast picking motion. so, you found that, that isn’t the problem/. But you have no hand sync or articulation at all here, the two hands basically aren’t even playing the same thing. You gotta work up the hand synch to be able to play what you’re playing here. it’s great that you have that fast picking motion, so you might not have a “mechanical problem” like we all do around these parts. You just need to slow it down and actually learn the part in rhythm, with both hands in sync. I suck though, so, just my worthless two cents.

That’s an interesting solution. Feels weird to me but I can see how once you get used to it that it works. That does not appear to be @JustDave70 is doing though.

A lot of the replies to the above suggest trying to do less; like getting a pattern going on one string, sticking with it for a while, then adding a string change, but only one note on the new string.

i don’t think he’s doing that, i think hes trying to play a usx pattern with dsx mechanics.

That has me curious, because assuming we start on a downstroke, even numbers of notes per string, like the 4nps chromatic exercise, is a REAL pain in this setup. You’d have to start on an upstroke for the string changes to work out correctly.

But once you recognize that limitation, what’s wrong with simply starting on an upstroke?

Starting on an upstroke is difficult to wrap your head around if you have that upstroke be the downbeat… but if you imagine the downstroke is still the downbeat, and you’re just coming in 1 16th note early, voila, problem solved. Even better, skip the first upstroke, and just start on the second note of the 4 note pattern on the first string, and then all the rest of the strings you cna play 4 notes.

These are both good points:

But once you recognize that limitation, what’s wrong with simply starting on an upstroke?

Back when I was 17 (cough cough 20 years ago) and playing the JP chromatic exercise, if I knew then what I know now this would have been an option. Heck, JP himself, in the same Rock Discipline video this exercise comes from jokes about being ambi-picktrous and having the ability to start any phrase on an up or down stroke. So, nothing wrong with starting on an upstroke, if it doesn’t mess with your rhythm too much. I do feel like for me, it would always feel a little weird.

But, I do want to see how we can pull together and get @JustDave70 some good feedback

i think hes trying to play a usx pattern with dsx mechanics.

Maybe so. I can’t really see the path his pick is traveling in these clips. It’s definitely possible to use his grip and still do USX. If he is indeed doing DSX, then he’d have a much easier time either flipping to USX, or starting on an upstroke.

@jpsychc your idea of playing 3 notes on the first string is cool and creative for chromatic lines in general. I can’t figure out how to do it and play the JP exercise @JustDave70 is doing here though.

Oh cool. In another thread that just posted, someone is doing trailing edge with USX SDCrites -Trying Out USX with Trailing Edge

Starting on an upstroke is difficult to wrap your head around if you have that upstroke be the downbeat… but if you imagine the downstroke is still the downbeat, and you’re just coming in 1 16th note early, voila, problem solved.

But if someone wants to learn a lot of repertoire using DSX, won’t it be useful to get used to playing upstrokes on the downbeat?

in my opinion no. Part of the essence of many dsx players’ vocab (well at least in bluegrass which is my area of expertese) is the sound of changing strings on the off beat. they all maintain the old rule of alternate picking where downstrokes are on downbeats, 100% of the time. if you want nice and neat string changes on down beats, then just use usx. putting upstrokes on the downbeat i guess works if you want to play a bunch of usx vocab using dsx, but why would someone want to do that? Also, maybe crazy electric players who utilize economy picking know how to get upstrokes on the down beat, but i won’t even bother, i know i couldn’t do it lol .