You’re picking with the whole hand while also doing forearm rotation. Relearn to pick with the wrist elbow is garbage ( This is the part where someone sends me a vid of some dude picking with the elbow with a poor synchonysation and only picking on adjacent string via swiping and SAYS ELBOW IS GOOD)
2nd U should pick the string with a larger movement what you’re doing now is bouncing all over muting it with the pick and not even letting it ring ( Listen to it, staccato as hell)
Also why would you pick with a downward angle? The first outside picking change will kill you

Please watch the tone here. No motions are “garbage”, and even if they were, I don’t address people on here that way, and neither will you if you want to stick around.

Re: selling footage of other players through your top-secret gmail address. Are you serious? We nuked that post. Don’t do it again.

Since when is elbow motion garbage?

That’s not at all what we are doing here! When there are obvious problems like “stringhopping” we tell people to change things straight away.

Elbow is typically DSX, so it will work well with phrases that only change strings after downstrokes (additional helper motions can be then used for the additional string change: see early Vinnie Moore). Gipsy-style forearm-rotation motions are typically USX, so they work well for changing strings after upstrokes. And so on and so forth. Great music can be performed with ease in both systems.

In general, I have to reiterate to please tone down the provocations. We’re very happy to hear different opinions but they should be formulated nicely. Let’s discuss contrasting ideas but not attack each other in the process thank you.

Okay I’ll explain where and how you’re wrong
Not because I’m trying to prove something for I really don’t care
I just wanna save the dude who may be here like me 4 years ago wasting his time on this stuff so lets begin.

String hopping which Troy is trying to fight here is not actually the problem.
The bigger problem is hopping on the single string when you’re not even changing it.
It can be illustrated perfectly by Troy himself. When he’s picking on a single string 2 things happen:

Why elbow is bad?
The best elbow player out there - Vinnie Moore is going to be killed by a simple lick like this just like any elbow guy would

And I’m even not talking about more complex string changes like skipping 2 3 or even 4 strings.

Also because elbow is way to big it cannot manage making the movements which are required to play perfectly for it just physically cannot do millimeter movements that are required for complex string changes. That is why all elbow players only play 1 type of string change and even that is usually done not with a clean string change but by swiping. Also all elbow players have sync problems. I mean all of them. That happens because the elbow constantly moves and the whole hand changes position, so you cannot do the movement exactly the same each time.
In order to do these things you have to pick with the wrist with ideally no movement of the hand up or down whatsoever, though often you kinda move it but a few millimeters tops.

I think Jason Richardson is a brutal elbow player (although he insists he’s never using his elbow) but yes, today I watched some of Anton’s videos and remembered an old Kiko Loureiro video where he was skipping 5 strings without issues on crazy tempos. As a beginner+ elbow player I’m almost sure I’d never be able to play any of those things. Just tried the string skipping section at the beginning of Lost not forgotten by Petrucci with a similar lick you posted and no way I’d play this with my current technique.

Jason has sync problem’s too, though he’s a cool guy, not like those nerds who base their whole playing on being able to do 1 type of string change and avoiding everything else. This guy goes for the things he wants to play even if they’ll sound a lil dirty so respect to him.
Still has sync problems tho, I remember some loudwire or some other video of him where he plays a sweep run followed by an elbow alternate picking - classic elbow sync problems and picking confidently only on adjacent strings

Kiko is one of the best guitar players ever yet his cross picking is no match to Anton’s in speed or agression because he uses fingers, and also he swipes a lot ( I used to analyse his technique coz I really like the guy and his music)
Also Kiko only can do staccato picking coz his pick is being bent all the time 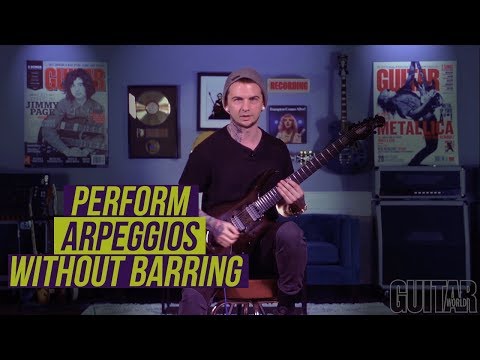 Literally the first thing he plays relatively fast does it sound in sync to you?)
Slow was perfect sync but you cant play elbow or even wrist with moving your hand and have good sync

Any other fast elbow run is going to be the same because that’s just how it works. It’s a hit or miss, usually miss

Upd. I kept watching he has some sync problems in the following example which he played slow

You may be right about it, I’m having similar problems with purely alternate picked lines like this.

I’m really not trying to be the smartest guy or a dick in any way.
I just wanna help the guys who are looking for actual answers.
I learned all of this from the maestro himself so thanks to him

Thanks @tommo for splitting the conversation

I’m really struggling with tempos beyond 180bpm 16th notes (I’ve been playing since 2020 October) and I was below 120bpm for months and overnight I was hitting stuff 180+ in last February but I’m still having issues with stamina. Although I have not practiced anything useful in the last 9 months because I played in a 70’s cover band and learning material consumed all my free time, I still feel like I just can’t find that new motion/what I’m doing wrong to make picking even on a single string sustainable around 190-210 bpm.

I appreciate you bringing the tone to more friendly levels!

I just wanna help the guys who are looking for actual answers.

I confess I do not understand all the points you are making. I understand how the pick in contact with the string will stop it, hence a more staccato sound. But I think even with a loose pick grip (e.g. Mike Stern) the effect is so short-lived that it can easily be ignored.

However, I noticed that you are being kinda “secretive” about the details, and some info you only want to release upon payment. If so, this conversation doesn’t really feel like a genuine attempt to help anyone but rather it takes more of an “infomercial” vibe.

Here I’m trying to execute one of the runs in the Scarred solo, the “fun” (falling apart) part starts at 1:33 when I go beyond 180+ 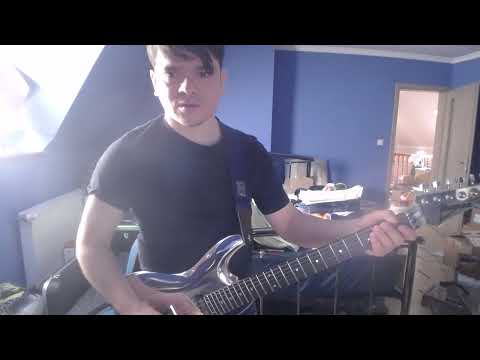 My picking hand is not visible here unfortunately. It was on a good day, not completely in sync, but could hit it on the original tempo 106 bpm 32nd notes: 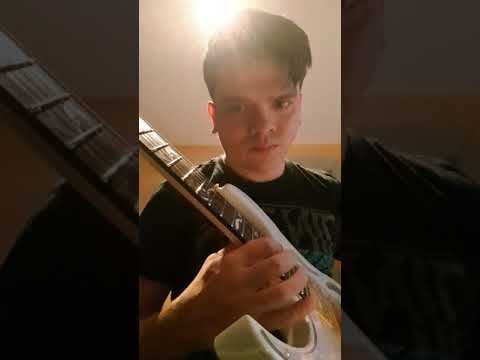 Still of the night run, it’s an absolute mess, I can only play it on good days, if I can at all: 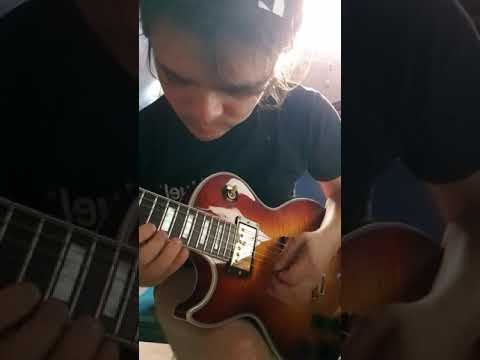 An other sloppy run, it gets insanely hard especially getting to the higher strings. I don’t feel I have a stable point to relate to with my picking hand. 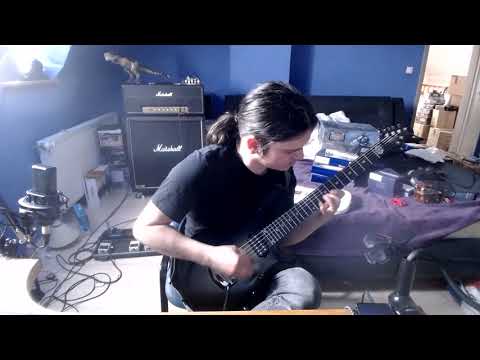 An finally this one, the final run is out of sync 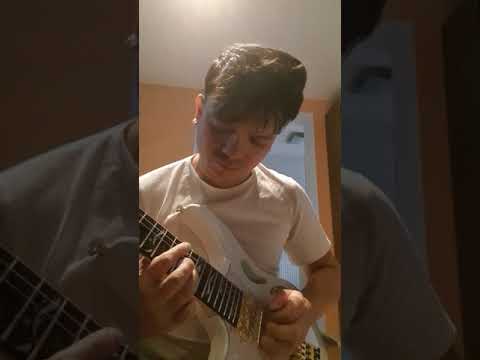 My problems are amplified a lot when I try playing in a standing position, but in the last two weeks since I started practicing again, I avoid playing while sitting.

I’ve got my 2 of my own guitar school dvd’s lined up. Should be avaliable round june/july, I’ll make a note to comeback here when it is done.

But I’ve shared the most important thing to get you started for free. (If someone told me this years ago maaaan)
If you pick is being tilted while playing even the simplest 1 string tremolo there’s no point going further, how do I illustrate this it’s like a bycicle trying to get some speed but each time your wrist jumps upwards it is like someone kicking the wheels.

To be honest what I did is studied the anatomy of the hand and some sports literature. In order to develop speed your body needs a small single movement. If your pick tilts that makes your wrist go up
So instead of your hand moving like this

There is one more mistake

Your name is Gabriel I suppose?
So Hi Gabriel)

Here’s a little experiment for you to actually test and understand if i’m right or wrong
In the position you are right now try to make a wrist movement
Simple up and down, see how you’re almost going paralel to the string? You’re kinda brushing it along its length

If you would place the hand 30-45 degree angle then the motion would be more string piercing.

You see how your hand is going all the way up and all the way down when you change strings (you’re lifting your elbow, That is going to create sync problems 100% ot the times no exception. Like you play 10 reps fast and only 2-3 will be in sync)

The still of the night video

To be honest what I would suggest Is to fix the up and down arm movement and become good at swiping. (Unless you wanna compete in being one of the best in the world in picking)

In order to relearn my picking and to get any good at Anton’s system it took me 2 years, I started out with picking 40 bpm. Wasn’t no fun trust me and I don’t think anyone would want this self imposed hell.

Just learn to get swiping as clean as it can be and dont move your arm while changing strings.
And practice that thing I’ve said before. The string bends underneath, not the pick or the arm.

So you’re here to insult us and our teaching, and promote and sell your own stuff as well as video of other players they don’t know you’re selling? No, you will not be coming back here to do any of these things, you’re done here.

To be clear to anyone else reading, I have zero issues with good faith questioning of technical issues in guitar playing, even if it shows that we’re wrong about something. I have been wrong many times about many things, and any honest teacher and player will tell you the same. It’s how we learn. In this case, this is not what’s happening here.

Read our terms of service for very clear language about pimping and selling your own stuff, and being a dismissive jerk to others on the forum.

I’m really not trying to be the smartest guy or a dick in any way.
I just wanna help the guys who are looking for actual answers.

I’ve got my 2 of my own guitar school dvd’s lined up. Should be avaliable round june/july, I’ll make a note to comeback here when it is done.