I’m going to keep an ongoing log of my alternate picking progress. Open to criticism, comments, questions, concerns, suggestions on how to play with more emotion and feeling, etc.

Lately I have been working on odd left hand fingerings. I put the tab for this below, it’s a really cool lick. I’ve noticed with these types of left hand fingerings after about 2-3 days they start feeling about as normal as any other one-finger-per-fret sequence. The best thing about wider left hand fingerings - besides their unique sound - is that your options for different fingerings are essentially non-existent. Therefore, it’s less likely you’ll end up picking a sequence of fingerings that makes playing the lick either impossible or extremely difficult. 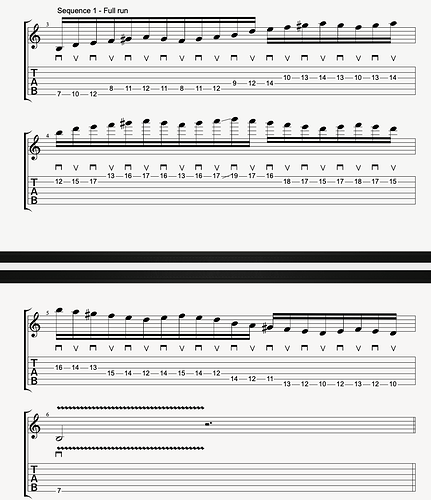 Example 2: In the style of Paul Gilbert

Starting off with inside picking and then transitoning into ascending and descending sixes. Fairly straightforward, would like to get this one a bit tighter tbh. In the last group or so of descending sixes I feel like I “decelerated” through the string. In other words, think of when you used to play baseball as a kid. The coach always told you to run through first base because he knew you’d likely slow down before reaching it. This is what I’m trying to avoid at high speeds at around 135-140 sextuplets here.

Example 3: In the style of MAB

My intonation was horribly fucked up in this clip due to the winter weather in NYC, but here’s exercise 5, part 5 from Speed Kills 1991, but modified with ascending sixes to work on transitioning from sixes to descending threes with what was I think (formerly) known as two-way pickslanting. I like to work on these techniques separately and then “glue” them together.

The signature descending-ascending portion of the final part of this lick is very odd and took some getting used to. It sounds like a malfunctioning computer.

Wow, all those runs sound pretty good to me. And they’re pretty fast too. Thank you for including fingerings in your tabs!

Yes, but can you play smoke on the water?

Great job and really impressive speed, I like the aggressive sound you are getting here!

If you are aware of them, what are your main motion / string switching strategies here? Thanks

As far as movements/strategies I think my main movement is a forearm blend. Probably a mix of wrist elbow and some rotation. I’m in the process of watching the new chapters to figure out what is going on but I am open to input since we have a lot of keen eyes here. All I know is when I look down I see my forearm rotating slightly, my elbow movement, and some thumb and wrist.

String switching, I’m not entirely sure. I do downpick a lot and I’ve always wonder if that’s why I have maybe a little more of a flatter orientation.

But honestly I have no idea. I’ve never really concerned myself with the movements portion. I just pick the left hand fingerings, right hand pickstrokes, and set the volume (i.e., number of times I repeat a phrase, whether that’s practice or performance). Whatever happens seem to happen on a subconscious level. I think it’s really hard to know from my own perspective short of going under the camera. Still learning about all of this.

As far as movements/strategies I think my main movement is a forearm blend. Probably a mix of wrist elbow and some rotation.

One thing I find interesting is that the amount of elbow flexion-extension you’re using is more commonly associated with DSX than USX. You might be the first example I’ve seen of USX using that much of an elbow ingredient.

Edit: Watching again, the other thing I’m struck by is the prominent deviation wrist offset in the second and further clips. Reminds me of the use of deviation offset in EVH-tremolo style forearm rotation. My guess is that it plays a role in helping “stabilize” the wrist so you don’t get unintended wrist movement from the ballistic movement of the hand.

Having done the entire seminar 340520592035 times I would say either this passage or the “Descending Fours” are the biggest challenges. If you hate the challenge of desc fours, check out Batio’s “Asc Fours” from Troy’s 2007 interview. It’s all one finger per fret if my memory serves me right; it might be a bit easier to stomach.

3 & 4 are Intense Rock sequences with Paul’s fingerings so you can be absolutely sure it’s the way to go. 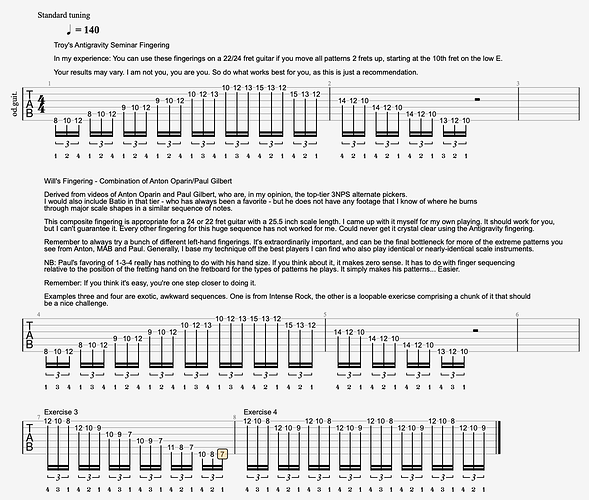 Forgot to include the videos I got the fingerings from so you have legitimate sources. Paul is playing his signature 22 fret/24.75 scale and Anton I believe is just playing a standard 22 fret/25.5 scale Ibanez. Should not make an insane difference but all of those little things add up, especially as you play further up the neck. Once again you need to experiment and figure out what works for you.

I recently saw an interview with Anton Oparin where he mentioned having to modify some of Paul’s technique to make advanced playing easier. I rewatched Intense Rock 2 and I’m relatively convinced he was referring, at least in part, to certain left hand fingerings.

Paul has a tendency to use very strict fingerings for the left hand when it comes to traditional 3NPS scalar playing, such as those seen all over Intense Rock 1. In fact, most of that video includes 1-3-4 to the exclusion of all possible 1-2-4 fingerings. For patterns where he changes strings less frequently as a result of having more notes on a string - such as Examples 9 and 10 in Intense Rock 2 - he seems to switch fingerings almost interchangeably. I’m guessing the reason is that the less frequently you have to change strings, the less likely you are to realize the inefficiency of certain left hand fingerings and their impact on the right hand via sympathetic tension. The only logical explanation I have for this inconsistency is that perhaps Paul shoehorned these examples into the video without having fully fleshed them out first. Intense Rock 2 as a whole is more compact and introduces more pentatonic and rhythm based lessons, in addition to his wider intervallic playing that can be seen in songs such as “The Curse of Castle Dragon” and “Technical Difficulties”. Perhaps he felt compelled to put in more alternate picking towards the end to level things out, but that’s only assuming they shot the video sequentially. The camera cuts at the end of Example 9; he might have taken a little time to work it out and have them roll the video again. Who knows. It’s a true peculiarity and stands out as a mystery to me in Paul’s catalogue of virtuoso playing.

As such, It’s actually the only example I’ve ever found of Paul’s playing where he appears to be working on an advanced problem and practicing it in real-time. Reminds me of Eric Johnson talking about the right hand problems he was having on his first video. If anything it’s a reminder that he’s human, too. Lol.

tl;dr: From 32:00 minutes up to 35:00, you’ll notice Paul plays Examples 9 and 10 with different fingerings when demonstrating them slow and fast. It’s very unusual for Paul, especially considering his reputation for robotically consistent picking technique.

For what it’s worth, I tabbed out Example 9 with the fingerings that work best for me.

Keep in mind these fingerings can change based on your type of guitar. There’s no one-size-fits-all approach to the left hand, but if you’re playing a modern shred guitar (25.5", 24 frets) this feels pretty nice.