Hey everyone! I wanted to share with you guys a really cool discovery I stumbled upon while transcribing some solos from the Alcatrazz record “No Parole From Rock and Roll.” This album features, in my opinion, Yngwie’s absolute best playing. I don’t believe Yngwie ever quite achieved the balance of fiery shred passages and gripping melodicism as well as he did here. Maybe because for this record he actually wrote all of his solos (as evident by the fact that he plays them nearly all note for note live).

Anyway, its quite clear upon transcribing some of these that his style was still in a bit of a developmental stage, as some of his later trademark licks, such as the one Troy references as the “Sword” seem to be totally absent. What is also clear, in this regard, is that his signature “cycle fours” pattern was entirely different. When I first discovered this, I felt like I wasn’t hearing things properly, or maybe the first solo I had transcribed, he fumbled in the studio a bit. But upon further investigation, checking live videos, and moving on to several other licks, I’ve determined that during this era, Yngwie did not play his cycle four pattern the way he would later on in his career, but rather something that looked like this, a pattern I will refer to as the “Alcatrazz fours;”

You can see the pattern starts very similarly to his later evolution of the cycle four, but the last two beats of the pattern feature a jump in the sequence, almost like the 2nd group of descending fours is missing, jumping right to the E note before descending 4 notes to B, doing a quick turnaround facilitated by some legato playing, before descending back to our starting note A on the 10th fret of B. What results is a very interesting and in my opinion slightly more classical sounding take on this cycle pattern.

I will now show three examples where he kicks off a run using this lick:

Island in the Sun:

This was my first encounter with the “Alcatrazz four” pattern. We’re in C# minor, using the “mixed minor/harmolian” shape found in 12th position. Here, Yngwie kicks off with the Alcatrazz Four, before descending the pattern via some cool two string sweep shifts and 2+3+1 six note shapes (very similar to the ones Uli Roth uses in Sails of Charon) before wrapping up with a reprisal of the pull/hammer turnaround he uses within the fours lick itself.

This one is in B minor, and starts at the 15th fret of the B string. I should note that whenever I checked how Yngwie fingered these whole/whole shapes this high on the fretboard, he routinely did this with fingers 1-2-3, and I assume that the quick “pull/hammer” movement within the fours lick is made easier by doing this between the 2nd and 3rd fingers. Yngwie gets out of the fours lick by doing a reversed descending four single string pattern (the one that starts on the index and jumps up a 3rd - see the classic Evil Eye break lick). This puts him in a perfect spot to do a root position B minor sweep arpeggio, before ascending up the scale to the high E string, upon which he drops another pull/hammer turn lick before ending on the root note B on the 16th fret of the G string.

Too Young to Die, Too Drunk to Live: 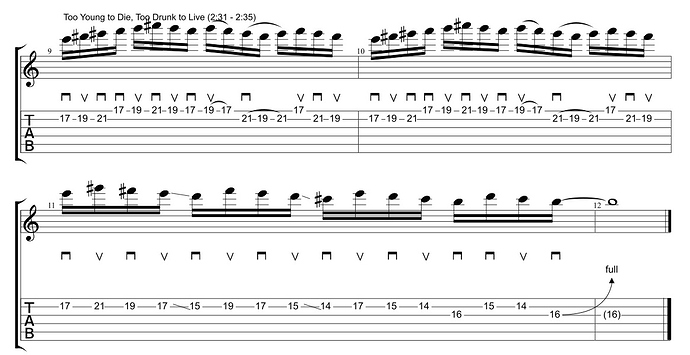 Finally, the last run in the Too Young to Die, Too Drunk to Live solo. In the key of F# minor, once again using the whole step/whole step shape, Yngwie repeats the Alcatrazz Four pattern twice before descending through a series of reverse single string fours before winding up in the pentatonic root position box, allowing him to end on the bent G string at the 16th fret.

I hope you guys found this informative! I’ve never seen this fours variation of his discussed anywhere before, and I believe Troy himself missed it when showcasing the Kree Nakoorie cycle four excerpt in the Volcano seminar. I don’t doubt Troy’s sleuthing skills, but this is a hard pattern to spot, since it is so similar, and at high speeds sounds very close to the pattern he would evolve this into. I’m very confident in my findings, since the Alcatrazz fours, as well as the derived pull/hammer turn, pop up way too frequently within his solos from this era to be a coincidence. Let me know what you all think! At the very least, even if I’m wrong, I do find this alternate pattern to be really cool sounding and very melodic in its own right.

So there might be more to this pattern, or Yngwie’s use of it, than meets the eye, because listening back to the excerpts at Youtube’s .25 speed, I discovered the Too Young to Die lick is slightly different, almost like a mash up between the Alcatrazz fours pattern and his eventual cycle fours:

I had to insert a quintuplet into the rhythm, but it is meant to be played evenly. This is now much more similar to the cycle four, but definitely includes the pull/hammer turn from the Alcatrazz four.

I wonder now if Yngwie’s intention all along was to play a cycle four, but since he is such an intuitive player, what we see in the Alcatrazz Four pattern is his hands trying to make sense of the sequence he is hearing in his head.

20 Likes
Early Yngwie - can anybody play it?
Yngwie, Far Beyond the Sun
Yngwie's "Island In The Sun" Solo Transcription
BillHoudini September 29, 2019, 6:23pm #2

These threads are the main reason I’m logging in on this forum, fantastic work and analysis!

Watch the Alcatraz live sentence concert on amazon or YouTube. His playing is unmatched, and imo sets the bar for neoclassical shred.

I do feel that on Marching Out his playing expanded quite a bit technically.

Again, thank you for this very great work you did us early malmsteen nuts

Thank you! Like I said, it’s fascinating to transcribe his solos from an era where there is a distinct difference in his soloing. Leaning on certain types of phrases more, etc. also wearing his influences a bit more on his sleeve: there’s one lick in the Hiroshima Mon Amour solo that is directly lifted from Sails of Charon. It’s one of the only time I can think of hearing Yngwie directly copy another guitarist in his fast playing.

I love his playing on the Steeler album, very raw and unbridled fury. More of an aggressive rock version of malmsteen, and I like the chromaticism he adds at times.

Yeah, you’re right, I know exactly the lick you’re talking about, but I forget the Scorps song it’s in as well.

Thanks for your work here OP. I too think Yngwie’s work with Alcatrazz was some of his best playing. I wish there were accurate transcriptions of the live album. His improv riffs on there are amazing.

Hi! Last week I decided to venture out and learn some Yngwie Licks. I decided to tackle the intro lick to Hiroshima Mon Amour since it combined that ascending picking plus a sweeping lick, something I want to practice. I could not find any tabs for it but here we are

Thank you so much, impeccable timing!

Hey OP - thanks for the great topic! I have just been working on these licks myself. I do believe Yngwie stopped using them heavily after Alcatrazz. Not sure why. You can find them occasionally in later recordings. It is very typical of his amazing picking during the Alcatrazz era. Not easy to play. To pull these off that cleanly is not something I have heard often. His picking during this time was absolutely unbelievable. Be fascinating to hear why he left them behind - he seemed to introduce more legato into his style shortly after Alcatrazz. Whereas when he was with them he was almost always alternate picking with high precision.

Has anyone heard anyone else do these licks?

he seemed to introduce more legato into his style shortly after Alcatrazz. Whereas when he was with them he was almost always alternate picking with high precision.

I would argue the contrary, there is plenty of legato snuck into these phrases, as evident by the tabs I’ve noted. The thing is that Yngwie’s pull offs are so articulate it’s hard to discern when he’s doing them vs picking. But when keeping in mind the rules laid out in Troy’s Volcano Seminar, it’s easy to spot where he would need to use legato in his phrases.

One of the things I’ve learned transcribing Yngwie’s soloing is that he is not a 3NPS shredder the way guys like Paul Gilbert or John Petrucci are. He plays way more in the CAGED boxes the way guys like (his influences of) Blackmore, Roth, and Schenker would, and then he will use single string lines to travel between positions he likes. He tends to favor the CAGED positions based on the C chord, the G (like most rock/metal dudes), and the D (which is where he gets his harmolian/Uli inspired runs from).

It’s from the solo in Catch your train!